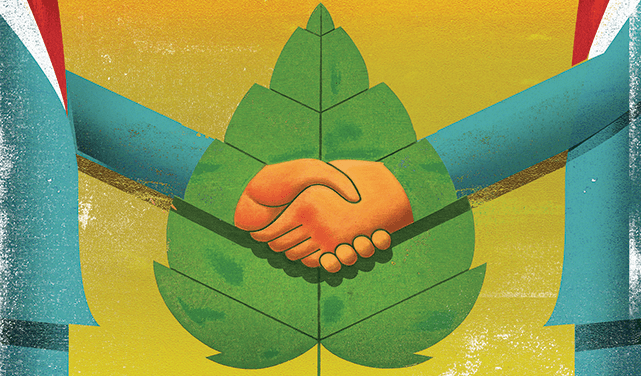 The most fascinating thing about Bob Willard’s The New Sustainability Advantage is that it is not really a book. It’s more like a PowerPoint deck, with a slide on the right and a commentary on the left. Content is edited to fit exactly that page; not one goes longer or shorter. It’s probably also the last print edition; Willard has moved online with his Sustainability Advantage Simulator, which he calls a “real-time précis of the book and an ongoing 10th anniversary edition.” The book is sort of a foot in both worlds, recognizing the changing way in which information is now conveyed.

Willard’s knowledge isn’t shaped like a book, and he has had to work really hard to make it fit into one. Reading is linear, while looking at charts is not. I found it difficult going until I decided to ignore the right-hand side with all the charts and just read the left.

Others may have a different perspective. Unlike many books about sustainability, this one is all about the bottom line. The numbers people might love the right-hand pages and ignore the left. But in either text or slide, Willard makes the case that “sustainability strategies are smart business strategies.” The subtitle reads “Seven business case benefits of a triple bottom line.”

The first and arguably biggest benefit is the hardest sell: increased profit and market share. Willard suggests that customers are attracted to companies that have a better reputation for being environmentally and socially responsible; that there is a growing market for new green products.

Notwithstanding the surveys he shows from 2009, there is a lot of evidence, too, that more customers these days are attracted to cheap stuff. As Willard notes, “markets are fickle.”

He’s on much stronger ground on the expense side of the ledger, including reduced energy, waste, material and water expenses. Willard introduces a concept he calls “dematerialization,” perhaps one of the most important trends of the next few years. It is basically about reducing the amount of materials and energy used to make products. Examples include thinner pop-can walls and lighter cars. It can apply to people, too.

“In 2007 I dematerialized myself,” Willard writes. “I was doing about 75 talks a year and was appalled at my associated carbon footprint… I decided to clone myself. I made a DVD of my talk and began giving presentations using webinar and videoconference technology.” We can all look forward to Willard the holograph.

He then goes on to talk about the benefits of having a healthier, greener work environment. These include increased employee productivity, reduced hiring and attrition expenses, and lower operational risks.

In the end, Willard does the math and estimates that by following his strategies for sustainability, profits will improve between 51 and 81 per cent. He calls that cautious and conservative, and then asks: “If the potential results are this good, why wouldn’t all companies embrace more responsible environmental and social strategies?”

Herein lies the problem – you could write another book on this subject alone. But in a few pages in the last chapter, Willard blames the “lack of leadership,” “entrenched mental models,” and the notion within many corporate settings that “green” and “environmental” may have a left-wing or anti-business connotation.

In fact, it is so much worse than that. In North Carolina, legislators are actually proposing a ban on the word “sustainable,” claiming it’s a United Nations plot to take away their freedoms.

Big business, meanwhile, is spending billions to roll back environmental regulations. In Canada, they don’t have to spend; some companies just asked, and the federal government gutted legislation designed to protect the country’s fisheries. In both countries, workers are less secure and less engaged than they have been in decades.

This is all to say that sustainability is complicated. While reading Willard’s book, there were many times I stopped and thought, “Yes, but…” That said, Willard has done a decent job of distilling his ideas down to 90 pages of text, and the same in slides. Indeed, almost every page could be expanded into a chapter, every chapter into a book. Fitting so much information into the shape of a book is a feat.

I am having trouble fitting it all into the shape of a book review.