Spring is finally here and the warmer weather has brought with it a sizzling race to serve up plant-based burgers. As the newly launched Beyond Meat IPO heats up the stock market, we’re taking a closer look at two established fast food stocks that have started dishing up greener burgers.

Restaurant Brands International (QSR:TSX) is a Toronto Stock Exchange-listed quick-serve company that owns Burger King and Tim Hortons, as well as Popeyes Chicken. They sell a lot of burgers and a lot of coffee, two items with a global supply chain and a heavy impact on the environment.

Burger King seems to be trying to revive its sputtering sales by getting in on the plant-based burger craze. By year’s end, its American locations will be serving up the Impossible Whopper, a plant-based alternative that seems to taste just like a regular whopper. Unfortunately, there’s some concern that it uses genetically modified yeast to produce the key ingredient that makes the burgers taste so meat-like. Health Canada has yet to approve the ingredient, so don’t expect to see the Impossible Whopper on Canadian Burger King menus anytime soon.

According to RBI’s short sustainability report, the only measure BK has taken towards sustainable beef production is non-specified ‘support’ for farmers to join the Global Roundtable for Sustainable Beef, and a loose commitment to develop specific criteria by 2020. On the bright side, RBI has said its eggs will be cage-free by 2025 and its pork will be crate-free by 2022.

On the coffee side of things, it’s pretty clear that Restaurant Brands is prioritizing lower costs over sustainable agriculture and fair wages. Instead of using third-party certifications like Fairtrade or organic, it uses an in-house vender code that sets the bar ridiculously low at legal minimum standards, with vague statements about reducing environmental impacts.

Looking for a sustainable alternative in fast food was challenging, but I found a tasty option in A&W Revenue Royalties Income Fund (AW.UN:TSX). You’re forgiven if you haven’t been to an A&W restaurant in a while, but it’s going through a resurgence and is now Canada fastest-growing burger chain, with over 950 locations. It’s now Canada’s second largest burger chain, behind McDonald’s (BK is in fourth place, behind Wendy’s).

A big part of its economic renewal has come from its commitment to bringing in more natural, ethically-sourced ingredients. All of its meat is now antibiotic-free, A&W started selling certified organic, fair trade coffee in 2015 and then started making its famous root beer from natural cane sugar and all-natural flavours in 2017.

While RBI reports that same-store sales are falling at Tims,  A&W’s same-store sales are up 10%. Much of that growth is attributed to A&W’s ongoing sales of the much-hyped Beyond Meat burger (introduced last summer) and the Beyond Meat breakfast patty (introduced close to the end of its first quarter). Plant-based Beyond Meat products are assertively non-GMO certified, so they escape much of the criticism from ardent environmentalists. And Beyond Meat’s soaring IPO debut last week only drew more media attention to the burger.

Besides its recent ingredient innovations, A&W is positioning itself as a sustainability leader by being on top of hot trends like banning plastic straws. Considering Tim Hortons was cited as the second largest plastic polluter in Canada, according to a Greenpeace beach litter audit, A&W’s move to eliminate 90% of in-store disposables gives it a major reputational boost. Being first to market with these small solutions is a great way to differentiate against global fast food chains and lets them reap significant reputational benefits with each incremental change.

A&W still has a long way to go. While it’s made some solid moves towards improving animal welfare, its eggs aren’t yet cage-free and its pork producers are still transitioning to gestation crate-free systems.  I’d like to see a more detailed annual sustainability report and more transparency around carbon emissions and executive pay. That said, A&W is definitely moving quickly towards greater sustainability and CEO Susan Senecal recognizes that these issues are important to consumers.

A&W Food Services of Canada (which has no corporate connections to A&W’s American locations) is obviously a much smaller company than Restaurant Brands, but perhaps that allows it to be nimbler in the quickly-evolving quick-service sector. With a higher dividend and a lower beta, A&W provides a nice mix of income and growth potential. The chain is the clear winner in this week’s Sustainable Stock Showdown. 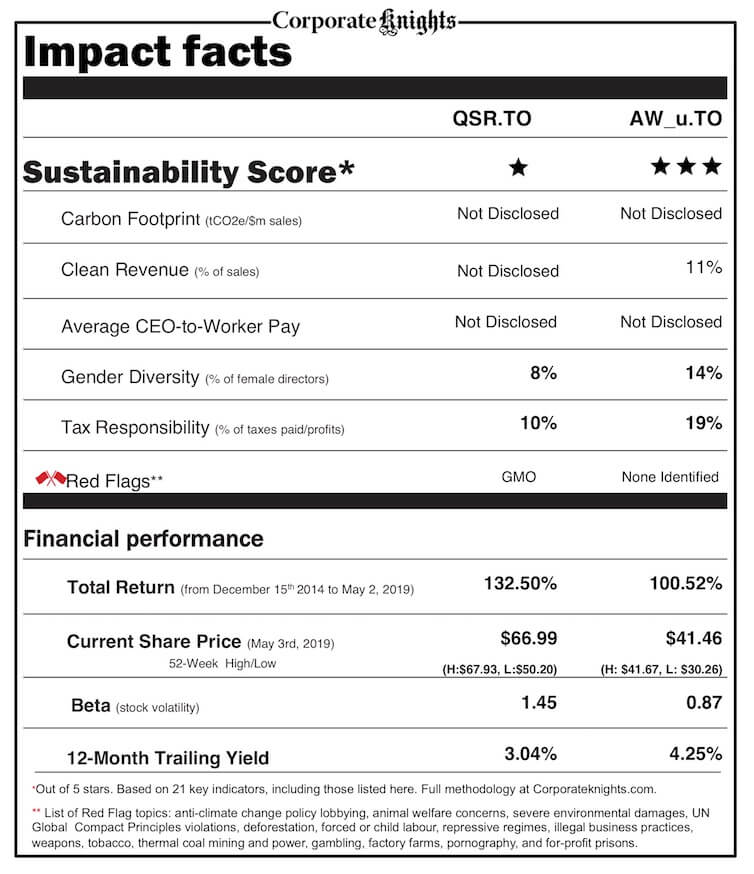 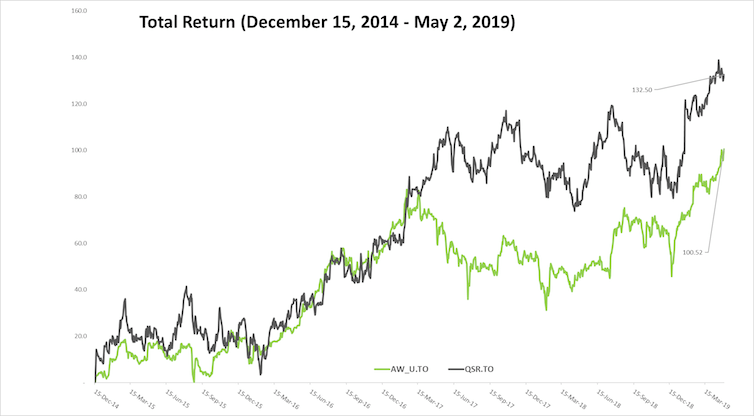 *A note regarding total Returns: Since RBI first started trading December 15, 2014,  we used that start date to assess both companies.

Investing comes with risk. This article is a general discussion of the merits and risks associated with these stocks, not a specific recommendation. Speak to an investment professional and make sure your portfolio is diversified.
Tim Nash does not own any shares of the companies mentioned in this article.
Correction: Earlier post included an image of a Beyond Burger that was not from A&W.