Berkshire Hathaway is the fifth largest publicly traded company on the planet. But while many Canadians have never heard of the conglomerate, there’s a good chance you know the name of its chair and CEO, Warren Buffett. Buffett is certainly an investing legend. Some would consider him an investing god. Every year, thousands of people flock to Omaha, Nebraska for the Berkshire Hathaway annual shareholders meeting, as they did earlier this month. So, is the Oracle of Omaha betting on a sustainable future?

Berkshire is a conglomerate with over $700 billion in assets. The largest business it owns is an insurance company (Geico), and its power business is both a major burner of fossil fuels and builder of renewables. About US$200 billion of Berkshire’s assets are invested in a basket of stocks with tax-dodger Apple being the largest egg and just under $US100 billion invested in financial services companies, including Bank of America (a Global 100 company) and Wells Fargo (which has earned some bad press in relation to unethical marketing practices). Berkshire earns clean revenue from things like non-coal rail and renewable energy projects, including the US$2.5 billion Topaz Solar Farm and giant wind farms in Iowa, with its power company, Berkshire Hathaway Energy, claiming it has made a cumulative US$25 billion investments in solar, wind, geothermal and biomass generation.

While Buffett told investors he has a “big appetite for wind or solar,” make no mistake, averting climate change is not his motivation. Buffett has made statements that indicate he’s unconcerned about climate risks, even though Berkshire Hathaway’s largest holdings are insurance companies. GEICO took a US$490 million loss due to flooded vehicles from 2012’s Hurricane Sandy, and still Buffett told shareholder and NASA climate scientist, James Hansen, in 2016, “[climate change] will not hurt our business, and it’s immaterial compared to other things that could affect our insurance business.”

This shortsightedness helps to explain why Berkshire Hathaway is still making big bets on oil (Buffet just sunk US$10 billion into Occidental Petroleum) and continues to own major stakes in coal-fired electricity generation (though some of its utilities are finally coming around to the idea of retiring coal plants early). Berkshire’s also actively lobbied against rules that would make it easier for people to put solar panels on their roofs.

Berkshire Hathaway doesn’t disclose much in the way of environmental data (at this year’s shareholder meeting, Buffett extolled the virtues of avoiding “needless reporting”). Instead, Berkshire simply provides a link to the paltry list of its companies (just 12 of the 66 listed) that release sustainability reports. I believe this is a huge blind spot that exposes Berkshire Hathaway shareholders to environmental, social, and governance risks that could come back to bite investors.

There is no company on earth quite as diverse as Berkshire Hathaway. But since Berkshire’s largest business is insurance, we’re pitting it against one of Canada’s biggest insurance and financial services companies in this week’s showdown.

I’ll be honest that I was skeptical of Sun Life Financial going into my research. While it claims to integrate ESG considerations within its institutional investments via the “ESG+” lens, it doesn’t offer any specific socially responsible or green investments options for retail investors. I’ve helped many clients get rid of overpriced Sun Life mutual funds to invest in greener and cheaper options. That said, I’m pleasantly surprised with what Sun Life is doing.

Sun Life earns clean revenue points from investments in renewable energy, green bonds and its ownership of Bentall Kennedy – a leader in green buildings. Sun Life’s chief investment officer has publicly spoken about the company’s exposure to climate risks, and I’m curious to see the results of a climate change scenario analysis they’re performing this year. Sun Life still has a long way to go, especially on the integration of sustainability risks into its investment funds, but its performance has been good enough to be named #41 on the Corporate Knights Global 100 list of the world’s most sustainable corporations. Over the past five years, Sun Life led investors to more profitable pastures than Berkshire, and as the current bull market cools down, Sun Life’s 3.9% dividend looks pretty against the goose egg offered up by Berkshire. If you’re looking to ditch your Berkshire Hathaway holdings, Sun Life would certainly be a more sustainable pick. 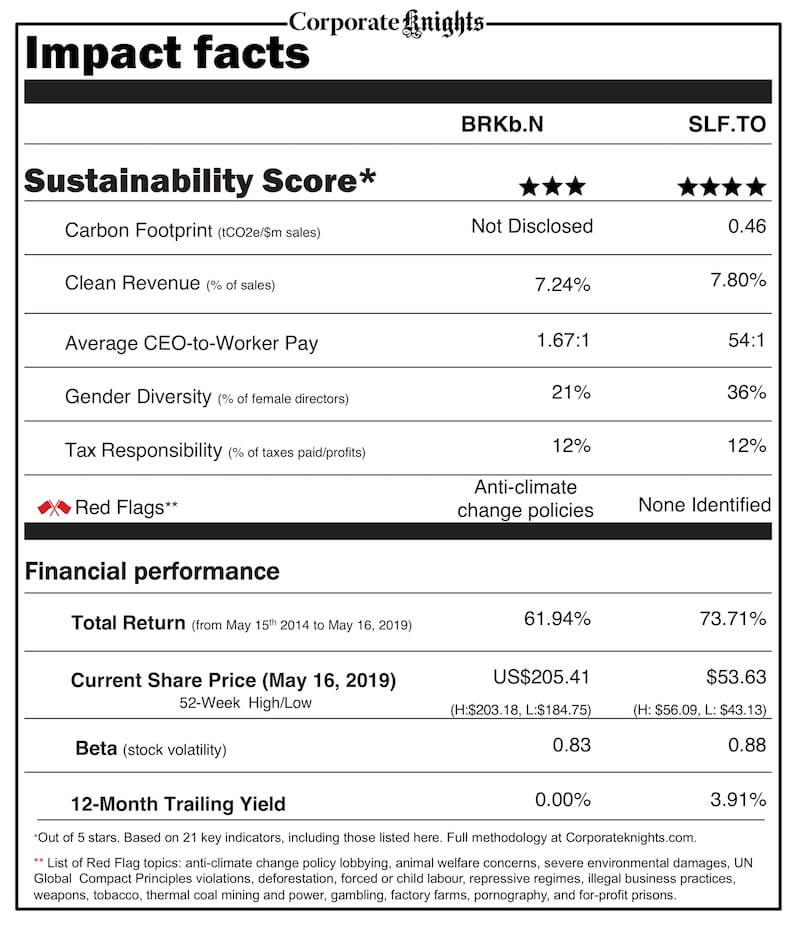 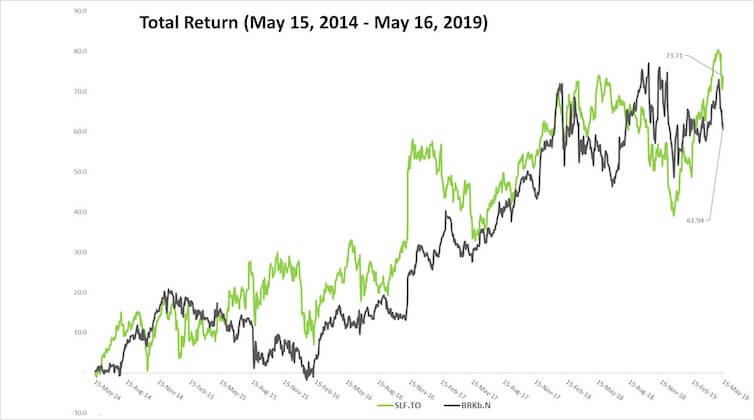