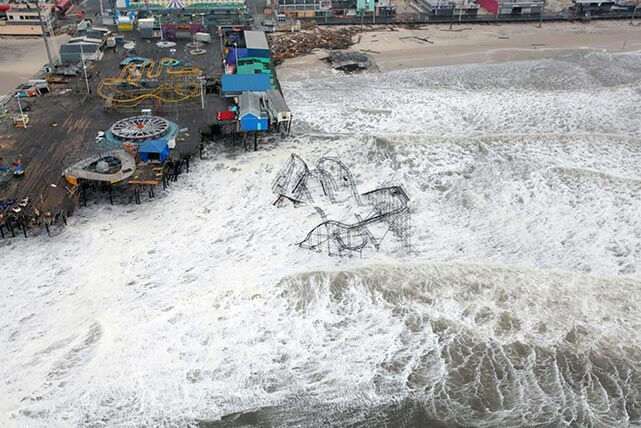 A hedge-fund billionaire, a former U.S. treasury secretary and an ex-New York City mayor are trying to convince investors that climate change is bad for their bottom line.

With unique geographic granularity, “Risky Business: The Economic Risks of Climate Change in the United States,” shows that different regions and key sectors of the U.S. economy are at risk if climate change continues to go unaddressed by the business community and decision makers.

“Every year that goes by without a comprehensive public and private sector response to climate change is a year that locks in future climate events that will have a far more devastating effect on our local, regional, and national economies,” says the report.

The report acknowledges that American investors are familiar with navigating economic risk. But climate change is a special case because, while the risks may seem far off, they are directly tied to decisions made today.

“Climate change is nature’s way of charging us compound interest for doing the wrong thing,” said billionaire philanthropist Tom Steyer in an online statement. “The longer we wait to address the growing risks of climate change, the more it will cost us all…It would be silly to allow these risks to accumulate to the point where we can no longer manage them.”

The Risky Business report is co-chaired by Steyer, Henry Paulson, U.S. Secretary of the Treasury between 2006 and 2009, and former Big Apple mayor Michael Bloomberg. The three men tasked the world’s largest catastrophe-modeling company, the Rhodium Group, with producing a report that combines peer-reviewed climate science with the estimated impacts of climate change on the U.S. economy.

The results show that key sectors of the American economy will be at risk of severe impacts if climate change is not brought under control:

While some regions will experience more extreme climate-related conditions than others, the report is addressed to investors across the nation: “Just because it’s not hot where you are doesn’t mean you won’t feel the heat of climate change.”

This is not only meant to be a wake-up call to investors; the report is asking them to work with governments and key decision-makers to come up with solutions.

“Our goal with the Risky Business Project is…to bring American business and government—doubters and believers alike—together to look squarely at the potential risks posed by climate change, and to consider whether it’s time to take out an insurance policy of our own,” states the report.

This week, Steyer and Paulson are expected to meet with Treasury Secretary Jack Lew and other White House leaders to discuss the report, which is expected to gain considerable political traction. Insurance industry officials will also reportedly attend.

Last month Corporate Knights spoke to Steyer about why he’s leading a movement against dirty energy and building hope for a climate-friendly future. Read about it here.