ChocoSol Traders makes no bones about the fact that it doesn’t sell what most people expect — a sinfully sweet candy from Belgium, France or Switzerland, especially popular in this season of feasting.

The west-end Toronto company reclaims a chocolate legacy that might seem un-chocolatey to many — a healthy, spiritual, dark and bitter-tasting food and drink hailing from Mexico Profundo, the ancient Indigenous Mayan culture of Mexico.

ChocoSol is in the business of selling chocolate bars and drinking chocolates, though its business would more accurately be described as a mission to sell goods or services with a social or environmental purpose.

Even by the standards of a “social enterprise,” ChocoSol’s business model seems quirky. Its unbleached packages feature a Mexican Day of the Dead-inspired skull, with bike chains for eyes and teeth. The company’s “ChocoSolistas” also call themselves chocolate “pedallers” and take pride in using bicycles to transport their display tables and power the blenders that make chocolate drinks at farmers’ market stands across the city. The bicycles brand them as supporters of neighbourhood technologies that feature sweat-equity over bank financing.

ChocoSol founder and owner Michael Sacco, who has a side hustle as a PhD student at Trent University in Peterborough, likes to call the company a learning enterprise, because its staff and customers are learning how to produce and live in tune with the environment. But the real learners may well be today’s conventional businesses that can be taught a thing or two about engaging sought-after youthful customers hungry for food choices that smack of authentic and sustainable experiences.

In its latest Flavor & Trend Forecast, marketing agency THP predicts that in 2020 “brands will need to champion a collective appreciation for sustainability, whole ingredients and minimal processing in order to thrive within this emerging consumer narrative.”

ChocoSol has that whole package down pat.

Their bars proclaim that dark stone-ground cacao is “the food of the gods.” It is a food, a health food even, not a candy. It’s more a spiritual offering than a party favour: as the wrapper claims, the ingredients have been “horizontally traded from forest gardens rooted in the Indigenous spiritual ecology of the Americas.”

That’s a way of telling informed customers that ChocoSol’s chocolate comes not from monoculture plantations with reputations for using pesticides and child labour, but from diverse gardens planted with vanilla, achiote peppers, coffee, hardwood and fruits alongside cacao trees. 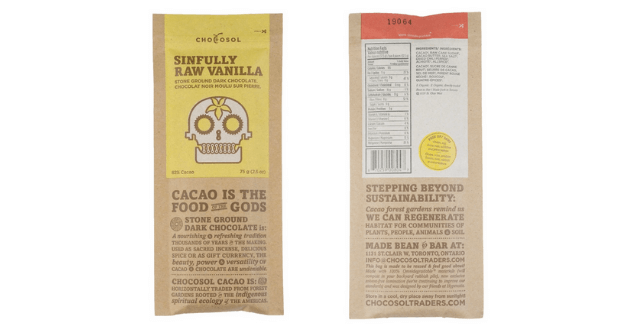 As a Toronto food policy enthusiast and chair of the Coalition for a Green Economy, I toured these forest gardens with Sacco in 2007. Through “horizontal” trade, ChocoSol cuts out the vertical supply chain relied on by most big companies and deals directly with producers, commonly offering them 15 per cent above the going international wholesale price (up to 300 per cent more for some rarer beans). Relying on face-to-face relationships, direct traders reduce the red tape common with fair trade labels that deal with large-volume producers.

But behind its social, ethical and small-scale artisanal production methods, ChocoSol runs as much on hard-edged business forecasts as integrity and soul.

“They’ve got what all their competitors would die for,” says Barry Martin, owner of the communications firm Hypenotic, which handles ChocoSol’s account, as well as that of many others in the “purpose-driven” space of Toronto food-based businesses.

“ChocoSol makes what people need, does it in a way that’s memorable, generates an experience, tells a great story that makes it bigger than life,” Martin says. “Of all my clients, ChocoSol best expresses the whole range that companies need to strive for” to avoid the downward spiral of competing as a commodity for lowest cost.

Sacco, who brands himself an “ecopreneur,” has raised up the company by its bootstraps since 2006, when he launched with a $15,000 line of credit and $15,000 “from the bank of friends and family.” Purchases from these “bankers” and their contacts probably accounted for most of the $20,000 in ChocoSol sales that year.

In 2019, says Sacco, ChocoSol will clear $1.8 million in sales, half to wholesale accounts — despite the fact it retails for twice the price of conventional chocolate.

The company won top prizes at the 2016 and 2017 Canadian National Competition for chocolate-makers and took gold for its Jaguar Pure, and bronze and silver for its Jaguar Swirl and Crunch, in this year’s International Chocolate Awards.

Jaguar is a ChocoSol standout specialty, inspired by a woman elder from San Pablo Etla, just outside the city of Oaxaca. She took Sacco under her wing when he was a graduate student doing action research on Indigenous food traditions in Oaxaca, the unofficial capital of Mayan corn, cacao and grasshopper-based cuisine.

Struck by Jaguar’s commercial potential to support forest-based peasant-style agriculture in village communities in the Oaxaca region, Sacco developed “direct trade” relationships with small family farmers who sold him chocolate, coffee and vanilla from their communal forest gardens. To support a premium niche market around Jaguar, Sacco and community groups planted more than 50,000 trees yielding the Jaguar species of cacao around tiny villages such as Felipe de Léon.

“Our vision is to reimagine opportunities, techniques and organization models for small-plot intensive and underfinanced producers,” Sacco says.

These forest gardens are an economic boost to villagers and also sink enough carbon in the soil and generate enough plant and insect biodiversity to offset any environmental costs of taking cacao and vanilla beans by boat and train to Toronto. 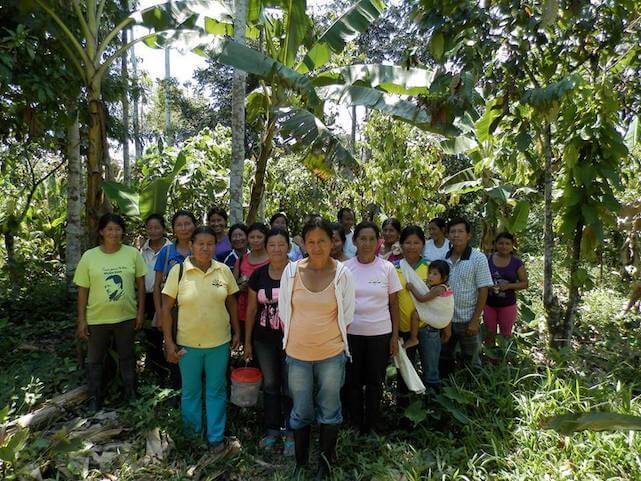 Business analyst Grayson Bass, who’s taught innovation strategies at the University of Toronto and is about to launch an Applied Innovation Certificate program there, thinks ChocoSolistas are spot on the money for a wide spectrum of change- and profit-making economic transformations of the near future.

Sooner rather than later, Bass says, social enterprises “will make the Fortune 500.” Why? Because they have compassion, he says. Compassion is not just a sign of emotional intelligence, he reasons. A “strong compassion muscle” is the precursor to business smarts, he says, because it leads innovators to ask the central question: What good does this do?

This gives compassionate entrepreneurs the edge they need to move up the ladder of innovation, he says.

On the lower steps on the ladder, innovators can optimize — find a faster, cheaper, more effective way of doing the same thing. They can also sustain — keep ahead of competitors by adding new services to an existing device.

At the top rung are disruptive innovators who change the nature of the game. To reach the highest rungs, entrepreneurs need to ask a “why” question, says Bass. That’s where companies such as ChocoSol excel, he says. Their “why” — a passion for a tasty health food that supports peasant producers and environmentally friendly production and distribution — leads them to change the consumer market for chocolate.

“Compassionate organizations have an advantage in solving problems and creating disruption because they have a problem to solve, not just a structure to fit into,” Bass says.

Sacco winces when business people call him compassionate or idealistic. “I don’t want to be called a hippie entrepreneur,” he says. “I’m offering a different value proposition.”

This fall, ChocoSol introduced “Halloween chocolate that isn’t scary” — no child labour and no environmental destruction. But that’s true of all their chocolate, including their seasonal Christmas Cranberry bar, dotted with local organic cranberries, or their Merry-Mint, made with dried mint grown on ChocoSol’s green roof. That roof is where cacao bean shells and other food wastes are composted to become soil to nourish new plants for tomorrow’s bars — the model of a circular economy, where yesterday’s waste becomes tomorrow’s food.

“My biggest challenge is focus,” says Sacco, who struggles with finishing his PhD, on the role of cacao and maize (corn) in Indigenous agriculture, while raising three children and managing an underfinanced social enterprise.

There are hidden strengths in a social enterprise, Sacco says. Having a cause helps define ChocoSol’s niche and also helps with customer loyalty, staff retention and developing new revenue streams, such as workshops for students, he says.

“We don’t lose any time selling, persuading or convincing customers to pay extra for real cacao mindfully produced. We work with the willing. That’s affinity marketing,” he says. “Our customers are our ambassadors, which is the best advertising we can afford.”

Sacco would like to see other social enterprises feature hundreds of other overlooked plant medicines that can be vehicles for stories — stories that are often suppressed by the way food is commonly marketed as a no-name and placeless commodity divorced from culture or social purpose.

This vision corresponds with the business scenario laid out to an agribusiness summit in New York in early December. Nick Fereday, of Netherlands-based Rabobank, a major banker to the global food and agriculture sector, predicted that today’s classic “Big Food” brands are doomed.

Upstarts “are tapping into the consumer trends of convenience, of health and wellness, of being a premium product and all wrapped up in a very, very strong mission statement,” Fereday told his audience of Big Food executives. If the big brands don’t smarten up, “we will see the end of iconic brands,” he warned. “By 2030, everything will be niche and focused on small markets.”

Alison Blay-Palmer, newly appointed UNESCO Chair in Food, Biodiversity and Sustainability Studies at Wilfrid Laurier University, agrees that food has what it takes to attract change-makers.

“Food provides a lever to address many intersecting challenges: climate change, biodiversity, rapid urbanization, health, equity, community well-being and more,” she says. “People who can envision how these issues are interconnected understand the potential of food for far-reaching transformation.”

Most of all, having a cause gets Sacco and his team of 25 full- and part-time staff to work every day. “I don’t think you can start with a business plan,” he says. “You need to start with something that calls you, or you’re off to a bad start.”