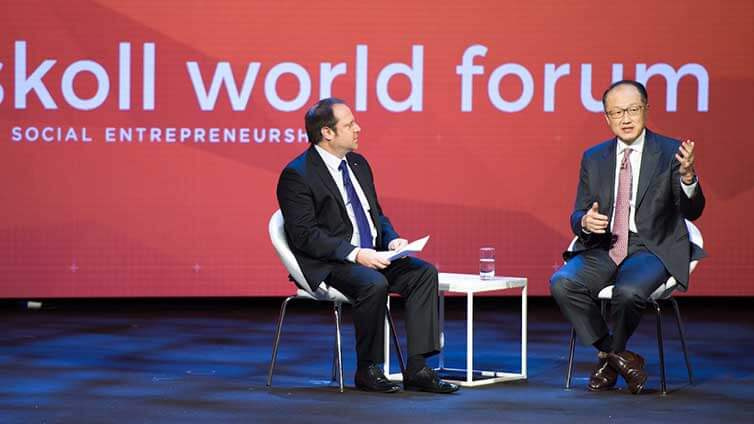 Amid the dreaming spires of Oxford, U.K., the world’s leading social optimists – philanthropists, activists, entrepreneurs and a few celebrities – met in April to discuss how to keep improving the world amid a nightmare political climate of fear and nationalism.

It was quite the mood swing for the Skoll World Forum, a global meetup for social entrepreneurs inspired by Canadian Jeff Skoll, who was eBay’s first president and now spends his time founding organizations that address global social, medical and economic ills. In its 15th year, Skoll World adopted the tough-love theme, “Fault Lines: Finding Common Ground.” Attendees were in a cautious and defensive mood, given the rise of Trump, Brexit, and us-versus-them politics.

Ulukaya told forum attendees that he is trying to build a business based on fairness and generosity – principles he learned from his mother. “I never thought I would get involved with business. I was always thinking I was on the other side,” he said. He shares critics’ anger at unsavoury business practices, but says his job at Chobani is to be “a competitive innovator, and channel that anger into the marketplace. The good people have to win.”

Ulukaya’s work proves that good examples can make a difference. Through Tent he has cajoled 70 companies, from Accenture to Zynga, into donating money, services or technology to support refugees. Business, he says, “is still the most effective way to change the world.”

As president, Kim redirected the bank’s resources to combat the 2014 Ebola pandemic when conventional health-care organizations were slow to act. Later, he brought health experts together with the reinsurance industry to create a new “parametric” insurance program that will free up emergency funds at the first sign of future pandemics – supported by insurers in hope of reducing the life-insurance and business-interruption claims that generally follow epidemics. “The incentives are aligned,” announced Kim, “so this [the slow response to Ebola] will never happen again.”

Two strangers came to her rescue. A business owner she knows only as “Mr. Biney” gave her 500 pounds for clothes and the occasional tea. And a woman she never met, calling herself “Auntie Sheila,” paid for a shoe-shopping spree. Mensah’s challenge to the Skoll attendees: Recognize your power to help others. “Be Auntie Sheila, be Mr. Biney: people who are not afraid to help others. Let your light shine.”

In accepting the award, Bono noted that “Capitalism is not immoral, but it is amoral. You have to tell it what to do.” Asked by Skoll how he reconciles serious activism with the life of a pop star, Bono said he and his bandmates agreed early on that the only way to justify their commitment to music was by working on social issues off-stage: “That gave us permission to be in the band.”

Porter reached this epiphany after he and his Harvard colleagues reviewed all the painstakingly researched, cutting-edge advice they had given governments about promoting prosperity – and found none of it had been adopted. While he studied the U.S. scene, he said the same general problems can be found throughout the world: ongoing failures to reform health care, taxation, education and infrastructure to ensure that people prosper along with corporations. Porter’s conclusion: “Our system is not designed to deliver solutions. It’s designed to advance the interests of the system itself, starting with our political parties.”

To fix the system, Porter said, we need campaign-funding reform, new processes for selecting candidates and ranked-choice voting (which lets voters pick second, third and fourth choices). None of this will come from the politicians, he warned: Voters must demand it. “We can change the way political systems work. But it’s not going to happen naturally.”

It would be an exaggeration to say that Skoll World attendees left Oxford with a spring in their step; there was too much work ahead. But the annual progressive clambake ensured that no one would be doing it alone.