The letters glazed on the large shopfront window promise something most grocers don’t typically offer: food in the buff.

This is Nu, Ottawa’s first zero-waste grocery store, where virtually everything on offer comes stripped of packaging, or naked as the name suggests in French. Inside the airy 1,700 square foot space, you’ll find display cases of fresh fruits and vegetables, with no cling wrap, Styrofoam trays or spools of plastic baggies in sight. A wall of shiny stainless steel containers offers an array of oils, vinegars and soy sauce not to grab and lug home – these jugs have taps with rows of refillable glass jars sitting beneath them (in case you forget to bring your own containers from home). Even mayonnaise and ketchup come in bulk here, in the refrigerated case next to slabs of tofu, cheese and, on Thursdays, hummus.

Nu is one of over half a dozen zero-waste grocers that have sprouted up across the country over the past year or so. Already popular in Europe, there are now four in Montréal, one on Salt Spring Island and one in mid-construction in Vancouver. At their heart, they’re less supermarket and more souped-up, largely plastic-free bulk boutiques leapfrogging beyond the aisles of dried spices and beans of bulk stores past.

“It looks more and more like a grocery store where you can find everything you need,” says French teacher-turned-grocer Valerie Leloup. “We’re not 100 per cent yet, but we’re getting closer.” The former packaging buyer for Danone’s German division began living packaging-free a year and a half ago, after her mother gifted her a copy of zero-waste guru Bea Johnson’s best-selling book Zero Waste Home. “It was a bit of a logistical challenge,” says Leloup, who’d spend her Saturdays driving across town to the four or five stores that allowed her to use her own containers. “I thought that’s really not very sustainable.” So she built her own one-stop zero-waste shop in Ottawa’s west end. There’s even a wall of shampoo and laundry detergent on tap.

With reports that there’ll be more plastic than fish in the ocean by 2050 and with images of straws and forks wedged up sea turtle noses going viral, anti-single-use plastic campaigns have been picking up steam. A wave of bars and restaurants across the continent are banishing plastic straws from drinks as part of surfrider.org’s #strawsuck campaign. Montréal has banned plastic bags by 2018, which would make it the first major city in Canada to do so, while Costa Rica, home to those plastic-ensnared turtles, recently banned all single-use plastic by 2021. Kenya’s even proposing jail time for disposable plastic bag vendors and users. 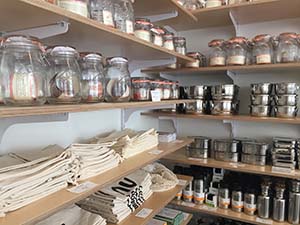 Still, as corporations like Subaru, Nestle and Unilever celebrate zero-waste-to-landfill status at manufacturing facilities and distribution centres, major grocers have been among the last to get onboard. Canadian grocers have more catching up to do than most, coming from a country that produces more garbage per capita than any other developed nation on earth, as National Zero Waste Council chair Malcolm Brodie points out. And as of yet, we have no national strategy for tackling Canada’s $31 billion food waste problem (though Ontario is currently mulling over a Nova Scotia-style ban on organic waste in landfill). Of the big three grocers, Montréal-headquartered Metro is the only one that’s publicly pledged to go zero waste in all of its stores by 2020. Notably, that doesn’t address all the disposable packaging wrapped around virtually every food item on shelves and sent home with customers.

Making sure truckloads of cardboard produce boxes are recycled and dumpster bins of unwanted veggies head to industrial composters doesn’t quite cut it with zero wasters either. Former marine mammal biologist Brianne Miller is the founder of Nada, Vancouver’s first zero-waste market, and wants to see her whole supply chain close the loop. “That’s one of our criteria to become one of our suppliers,” says Miller, who’s been holding zero-waste pop-up shops around Vancouver until her 2,300 square foot LEED Gold-certified space on East Broadway is fully built. “They essentially need to help us reduce waste not only in our business but in their business as well.”

Miller has witnessed plastic food-packaging debris swirling around remote corners of the ocean, from Borneo to Belize, and says even the most local, organic and ethical food is caught in the same disposable waste trap as other food. She’s now nudging suppliers to ditch the twist ties, plastic bags and cardboard boxes for refillable Rubbermaid bins.

Miller is working with local farmers to keep food waste in check too, and is planning a smoothie bar to process wilting produce as well as a free community fridge for the social housing tenants sharing the building.

At Montréal’s first dedicated zero-waste grocery store, which opened in summer of 2016, Épicerie Loco gives unsold produce away either to customers or their caterer, who transforms, say, bruised eggplants into baba ganoush and wilting green beans into a vegan satay dish for Loco’s cold salad bar.

Unlike major grocers who keep enormous stacks of shiny produce piled high, “we order the right amount of food,” says co-owner Martine Gariepy, who started the business with three fellow environmental studies students from Université du Québec à Montréal. “Honestly, we’re not wasting stuff like you could see behind a big grocer. We’re not stuck with big, big producers so we don’t have quota [and] we order small.”

A couple items at Loco still come in plastic bags to extend their shelf life, like the frozen vacuum-sealed fish, but instead of selling small bags of 20 frozen shrimp to customers, Loco clients can scoop as much as they need in bulk. There have been some challenges with larger suppliers promising to work within the zero-waste framework and then surprise, a box arrives with everything individually packaged. Despite the kinks, business has been thriving and Loco opened up a second location in the Montréal neighbourhood of Verdun in September after a flood of emails begged the owners to spread the love across town. This time, it’s sharing a larger space with a zero-waste cafe stocked with donated ceramic mugs.

Admittedly, the grocers are still quite niche, but indy entrepreneurs aren’t the only ones tapping into the zeitgeist. Last winter, Bulk Barn relented to consumer pressure and reversed its policy against customers bringing in their own refillable containers. VP Jason Ofield says it took a few years of coaxing his father, Bulk Barn president Craig Ofield, but the program is now mandatory in all of its 270+ locations. Between the reusable container program and implementing a four or five cent plastic bag charge, Ofield says plastic bag use is down significantly: “It’s an absolute home run.”

Can the full zero-waste concept spread to major grocers? Corporate food manufacturers aren’t likely to give up on the prime branded real estate of shiny plastic bags or oversized cardboard boxes any time soon, but zero wasters argue supermarkets of the future may be left with little choice but to shift away from excessive disposable packaging and flagrant food waste.

“We’re a large number of people on a finite planet with a limited amount of resources, so as time goes on people are going to have to become aware of their consumption and where products are ending up,” says Nada’s Miller. “I think the zero-waste movement is here to stay, ultimately out of necessity.”