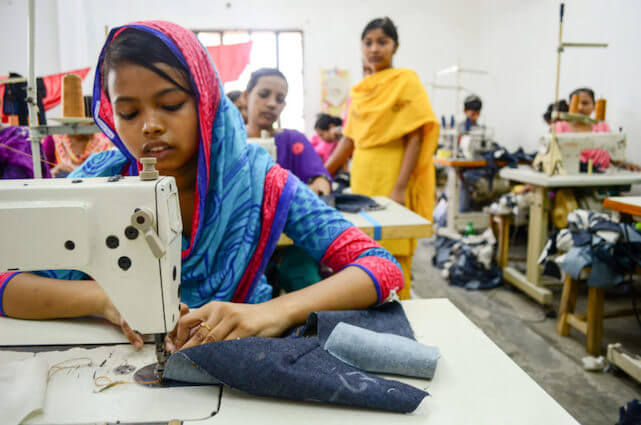 A look at child labour inside garment factory in Bangladesh. Courtesy of World Vision/Photo by Mark Nonkes.

The idea was simple. Walk into the mall on a busy Saturday afternoon and turn ethical labelling on its head in an effort to understand consumer behaviour. I was carrying two distinctly different stickers. One said “Product may contain slave labour.” The other one said “Product has been certified to be slave labour free.” Pretending to be a shopper, I placed the stickers on clothing items around the busiest areas of an H&M store and observed. How would people react to the possibility that a nine-year-old Bangladeshi girl paid a below-living wage had sewn the latest and greatest top?

The truth is, most people didn’t even notice. Of the ten or so shoppers who showed interest in the “Product may contain slave labour” shirt at the front of the H&M, only two actually read the sign. Sitting on the sidelines, I listened to a shocked mother and daughter examine the shirt marked as potentially being created by slaves and yet they still entered the store, continuing their shopping as usual. Meanwhile, the “Product has been certified to be slave labour free” sign received even less attention.

When I repeated the process at the Gap and put the stickers on men’s jeans and women’s t-shirts, only 20% of people acknowledged the signs. Considering that labels act as powerful tools to warn consumers about allergens like peanuts, my stickers seemed hopeless in aiding consumers’ purchasing decisions as so many people overlooked them.

This lack of attentiveness doesn’t necessarily mean that consumers don’t want to buy more ethically. In 2016, Morgan Stanley surveyed 1,000 customers in the U.K. regarding their views on leading clothing retailers. 51% of respondents said that ethical credentials were somewhat or very important when deciding among apparel retailers. The same study also found that 62% of respondents valued good ethics as a key spending criterion. Good ethics landed in the middle of a list of 12 factors; good value for money was first at 84% and good advertising last at 36%.

To shop ethically, it’s critical for consumers to understand that slavery is not an idea of the past. An estimated 25 million people, the majority of which are in Asia Pacific, are victims of forced labour and subject to slavery, debt bondage and human trafficking. They’re found in the supply chains of global industries from canned tuna to British spring onions. Forced labour is also woven into the production of cotton, leather, textiles and garments at the world’s largest clothing retailers. According to the Global Slavery Index, the clothing industry is the second largest supporter of modern slavery after electronics. 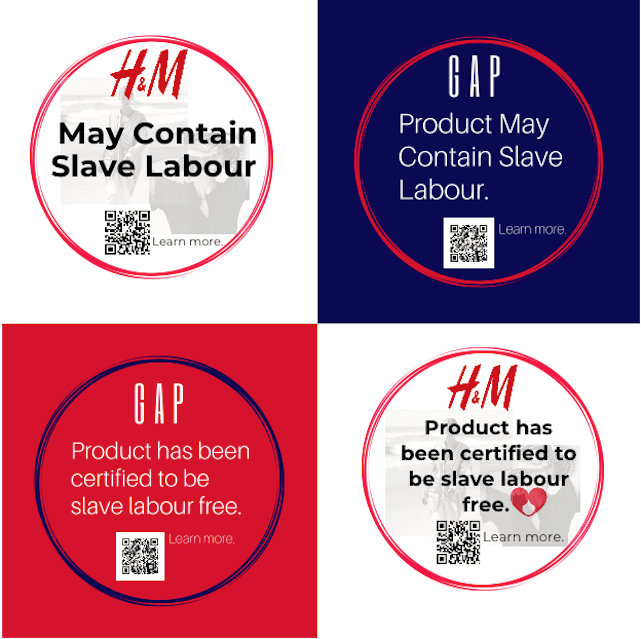 Last month, an Australian ABC television investigation uncovered that Target and H&M were among the brands sourcing cotton from China’s troubled Xinjiang province, where detained Muslim Uyghurs are reportedly forced to work in textile factories. The brands said they are investigating their relationship with suppliers.

Patricia Carrier, a program manager at Modern Slavery Registry, told Ethical Corporation that “given the prevalence of modern slavery in global supply chains, we know that most global companies will have it somewhere in their supply chains, very far down where they don’t have much visibility or leverage.”

The International Labour Organization values profits from slavery at $150 billion a year, making it more fruitful than Apple. Essentially, these victims are part of the reason why we can walk into our favourite fashion retailers, snag a great deal on a pair of jeans and feel economically satisfied because we found our size before it sold out.

The 2015 documentary The True Cost highlighted several of the gruesome aspects of fast fashion. It delved into the lives of low wage workers in developing countries and featured a 23-year-old Bangladeshi garment factory worker named Shima Akhter. It’s Akhter’s plea to consumers at the end of the film that is most chilling. “I don’t want anyone wearing anything,” she says, “that is produced with our blood.”

After hearing Akhter’s teary-eyed message, I assured myself that I would never again buy from a fast fashion retailer until later that week when I found the perfect summer dress at Zara. Could I consider myself an ethical consumer or was I some sort of monster?

A possible explanation for the lack of practice in ethical consumerism is that people often have different goals in different contexts. For instance, in the long run someone may want to lose weight but in the short term they’ll eat an entire chocolate cake.

A study called “The Socially Conscious Consumer? Field Experimental Tests of Consumer Support for Fair Labor Standards” tested this idea in 111 Banana Republic Factory stores across the U.S. by arranging two different signs around the stores. One highlighted the fashion attributes of products while the other explained the company’s commitment to promoting fair and safe working conditions. The labels with information about labour standards on low priced men’s and women’s items had no statistical impact on sales in outlet malls. Notably, the labour signs did have a positive effect on female shoppers looking at higher priced items.

Notably, the labour signs did have a positive effect on female shoppers looking at higher priced items.

The blinkered mindset, which many consumers maintain while shopping, makes it difficult to consider the ethical implications of a purchase. I liken this to going to a rib fest with my vegetarian best friend and having her try to convince me to eat salad instead. Of course, I love animals but I’ve come with the intent to buy ribs and that is what I will eat.

People may also engage in unethical behaviour and defend their desired perception through motivated reasoning. One study title sums it up concisely: “Sweatshop Labour is Wrong Unless the Shoes are Cute: Cognition Can Both Help and Hurt Motivated Moral Reasoning.” Georgetown University researchers found that a great sale or exclusive offer can justify labour practices, as can assumptions that sweatshops are the only realistic source of income for workers in poorer countries. The study also found that consumers that were stressed, distracted or preoccupied were less likely to justify sweatshop labor “due to a lack of mental capacity to convince themselves of something that isn’t true.”

A recent report by the San Francisco-based supply chain benchmarkers at KnowTheChain ranked global companies on the steps they took to eliminate forced labour throughout their supply chains. Gap (which scored 75/100), and H&M (65/100) were among the leaders, which is why I chose to target them for my experiment. The stickers, evidently, received little attention, but is it right to put the onus on consumers whose goals lead them to shy away from considering the use of slave labour in products?

In Canada, many of the most vigilant shoppers have trouble arriving at informed decisions. World Vision found that 80% of Canadians have no insight into whether their purchases assist in the exploitation of children. The study also noted that 90% of Canadians agree that the government should obligate companies to publicly report on their suppliers as well as their efforts to curtail slave labour in their supply chains.

Engaged citizens and advocates are encouraging Canada to follow in the steps of the U.K., California, the Netherlands and France in passing legislation to address modern slavery. The U.K.’s Modern Slavery Act guarantees that companies who operate at least part of their business in the U.K. and have approximately $73 million in annual gross global turnover are held liable for actions in their supply chains.

Kevin Thomas, the CEO of the Shareholder Association for Research and Education (SHARE) explains that “Canada needs the type of regulation that would empower private sector companies to report on their due diligence efforts to restrain and eliminate the use of modern slavery in their supply chains.”

Last December, a private member’s bill calling for a modern slavery act in Canada was tabled by Liberal MP John McKay. The proposed act would ask companies doing business in Canada (with at least $40 million in annual revenue) to submit public annual reports on the steps taken to prevent and reduce the risk of forced and child labour in their supply chain. In June, Employment and Social Development Canada held consultations on how the federal government should address labour exploitation in supply chains. Any further work on this has been suspended until after the federal election in October.

Would a modern slavery act survive the next federal election if there’s a change in government? SHARE’s manager of engagement and policy, Delaney Greig, is hopeful, “We believe this is a cross-party issue and does not depend on the same government being re-elected. Modern Slavery Acts in the U.K. and Australia have come in under conservative governments.”

Either way, the more pressure put on government and companies to root out modern slavery, the more likely they are to provide better working conditions for those whose anguish is on the clothing we wear daily.