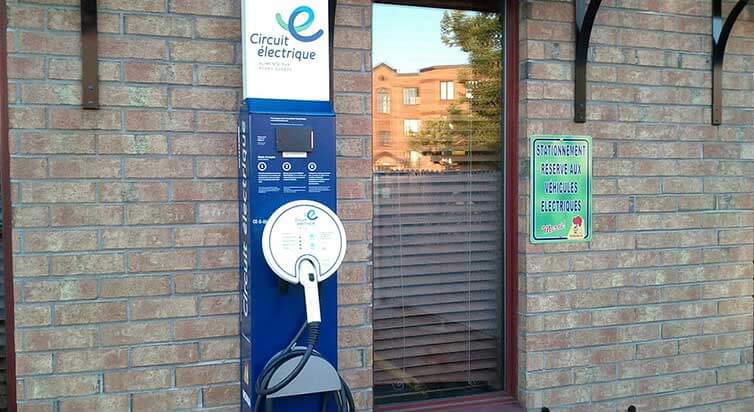 An electric vehicle charging station at the St-Hubert restaurant on Wilfrid-Hamel boulevard in Quebec City. Photo by Bouchecl

A bill passed by the National Assembly of Quebec last October establishes minimum sales targets for electric, rechargeable and hybrid vehicles, also known as ZEVs (zero-emissions vehicles). This makes the province the first jurisdiction in Canada to enact ZEV requirements, already in place across 10 U.S. states including California. “We have just adopted one of the toughest bills in North America, and we did so unanimously,” said David Heurtel, Quebec’s minister of sustainable development, the environment and the fight against climate change in a statement.

Starting in 2018, at least 3.5 per cent of all cars sold by automakers in Quebec will need to meet ZEV standards. Car companies that sell more than 5,000 cars a year in the province will be included in the system. This minimum will rise to 15.5 per cent of sales by 2025. A system of tradable credits will govern the program, allowing automakers that exceed the minimum quota to sell them to competitors that have failed to do so. If there are not enough available credits on the market, the automaker will be fined by the province.

Quebec is working to reach its goal of 100,000 ZEVs across the province by 2020, with 8,188 electric vehicles (EVs) registered at the end of 2015. Sales have been steadily increasing, doubling every year for the past four years. Yet annual sales still comprise less than 1 per cent of the overall market share for plug-in vehicles.

The quotas are part of a broader push towards the electrification of transportation in a province that runs almost entirely on hydroelectric power, including a rapid build-out of EV charging stations along key transportation corridors. Quebec already has about 640 charging stations available to the public, along with an $8,000 rebate for EV purchases. EVs are also allowed to use car-pool lanes.