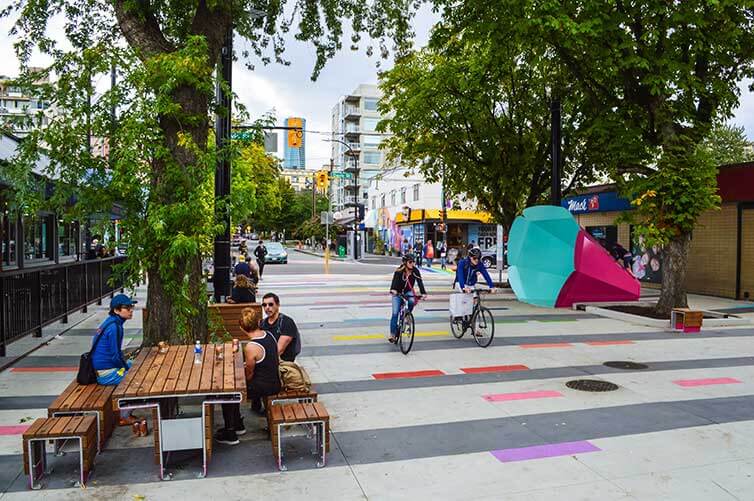 Inch by inch and block by block, cities around the world are beginning to break up the half-century-long monopoly the private automobile has enjoyed over their public realm. Healthy, social and mutually beneficial activities such as walking, cycling and even good old-fashioned loitering have been left fighting for scraps of street space for far too long.

The car’s hegemony won’t be challenged without a fight, as Janette Sadik-Khan quickly discovered during her six-year reign as New York City’s transportation commissioner, reminding us: “When you push the status quo, it pushes back, hard.” Knowing that seeing is truly believing, Sadik-Khan and her team would often roll into a location at the end of a business day, altering it with some paint, planters and plastic chairs before the next morning – a strategy straight out of the tactical urbanism playbook.

While city officials often make the mistake of over-consulting and over-engineering a proposed solution, these lighter, quicker, cheaper options allow them to experiment with low-risk pilot projects before making them permanent (and yes, sometimes they might even fail). Structural changes to our streets also require a cultural change, and that can only happen when residents get to experience these dramatic transformations first-hand.

In reviewing the past 12 months in urbanism, one thing became glaringly obvious: 2016 was the year that cemented the critical role that pilot projects can play in enhancing the livability of our urban environment. City builders looking to change the status quo would be wise to study their undeniable success, and consider replicating one or two into the places where they live, work and play.

We need to look no further than our own backyard of Vancouver, which, like many cities, is hampered by endless red tape and a local media willing to declare a “war on the car” whenever a modest reallocation of street space is proposed. 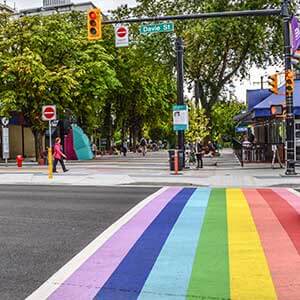 The first is a springtime council vote to close the 800-block of Robson Street to motor vehicles – finally realizing Arthur Erickson’s vision of Robson Square as a permanent, central gathering space. Temporarily opened to people during the 2010 Olympic Winter Games, Viva Vancouver transformed it into a vibrant urban plaza that has been reactivated every summer since, only to be returned to a thoroughfare on the first weekend of September. The final decision was made in confidence after five incredibly popular summer pilots with minimal impact to traffic flow.

Similarly, Jim Deva Plaza became the city’s first fully-completed pavement-to-plaza project in July, a result of summer closures on a single block of Bute Street in the city’s bustling West End. There, Viva Vancouver public space activations helped demonstrate its potential to local residents, businesses and commuters. Ultimately, the conversion acts as the first in a series of improvements to the area, which will see new public art, pedestrian and transit connections, and additional seating, planting and lighting in the next two to three years.

Glancing ahead, we’re encouraged by the prospect of a Downtown Vancouver Business Improvement Association that champions the prioritization of people over cars. In September, it unveiled Alley-Oop, the first of three alleyway activation test projects financed and built in partnership with the City of Vancouver.

Paris’ reconquest of the River Seine 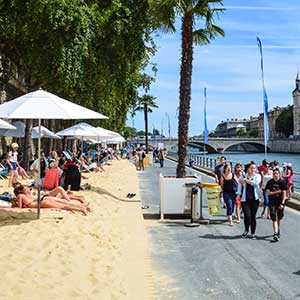 Since 2006, the mayor’s office has hosted Paris-Plages (“Paris Beaches”), a temporary artificial beach installed along the River Seine during the summer months. Residents and tourists alike can be spotted walking, cycling, playing sports, sunbathing, drinking and dining along the river, in a corridor that sees 43,000 cars per day during the remaining 10 months of the year. However, 10 years of seasonal summer closures have been enough to convince Parisians that this stretch of motorway is expendable, and in September, council voted to permanently pedestrianize it. Mayor Anne Hidalgo heralded the decision, calling it the “end of the urban motorway in Paris, and the reconquest of the Seine.”

Paris-Plages, along with the weekly Paris Respire open street events and the fledgling P’tit Vélib’ bike share for kids, are some of the creative ways Hidalgo is helping Parisians rethink their city streets.

Perhaps the most persuasive exercise in changing hearts and minds is the citywide pilot undertaken by the City of Calgary with its recent 18-month cycle track network. Narrowly passed by an 8-7 vote in April 2014, it was delivered two months early and $2 million under budget, reallocating just 2 per cent of the downtown street space to induce a considerable 1.2 million bicycle trips, with little to no driver disruption.

But its genius lay in the details, and city staff deserve a great deal of credit for not just focusing on its design and construction, but also ongoing education, engagement and management. Built with flexible delineators, planter boxes, adjustable concrete curbs and floating traffic signals, this allowed engineers to tweak the system (which they did over 100 times), analyse data (over 80 points collected from 10 different locations), and engage and educate the public through promotional campaigns, various forms of signage, videos and over 20,000 personal interactions.

Just before Christmas, council made it permanent by a 10-4 margin, meaning the pilot accomplished exactly what was intended: demonstrating to a skeptical public that with safe, separated space for cycling, even sprawling, frigid Prairie cities will get on their bikes. Councillor Diane Colley-Urquhart, who initially voted against the pilot, decided to change her vote, telling reporters: “I was a person that didn’t support this in the beginning. I thought this was madness. But, to see how it’s evolved, and how it’s working and to see how people are starting to get the fact that this is shared public space.”

Calgary has now created a template for others to copy, inspiring their peers in Victoria, Edmonton and Winnipeg to plan their own cycle track networks in the coming years.

Looking forward to the coming year, pilot projects will continue to offer a clever and captivating way to reimagine our cities – not just their brick-and-mortar streets, but also the way we move on them. This is especially true when it comes to urban logistics, with the slow rise of the cargo bike for personal and professional use. Still frustratingly difficult to test drive, purchase, finance and park – despite their growing 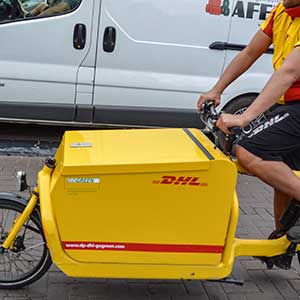 popularity – some local innovators are directly addressing those barriers and demonstrating their endless possibilities by executing smaller-scale case studies.

While shipping giant DHL rolls out a 75-bike trial on the streets of Germany and the Netherlands, UPS is conducting its own electric-assist trike test in “America’s bicycle capital”: Portland, Oregon. One only assumes it’s a matter of time before others in the goods movement business catch on to the cargo bike’s (almost) unlimited potential and pedal-powered deliveries become the norm in an increasingly congested urban environment.

It was a tremendous success.

Chris and Melissa Bruntlett are the co-founders of Modacity, a multi-service consultancy with a focus on inspiring healthier and happier forms of urban mobility through words, photography and film.