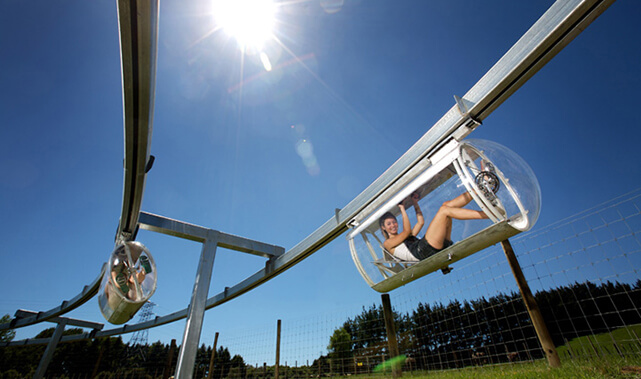 The Shweeb prototype in Rotorua, NZ.

You may have noticed that while everything else has adapted to advances in technology, your daily commute has stayed relatively the same. A small Niagara Falls-based company is hoping to change that by creating a personal rapid transit (PRT) system that is fun to use, arrives on demand and is human-powered.

The company is launching an Indiegogo campaign on Monday to try to raise $1 million to help with the initial phases of a project it’s planning for Niagara Falls. It needs an estimated $10 million to reach its goal of launching the operation by 2016.

The SkySMART technology, created by Shweeb-Can Corporation, combines the convenience of owning a car, the health benefits of riding a bike and the efficiency of public transit. When a user arrives at the station, they are presented with a pod suitable for two, five or 12 people. The user can choose to cycle and save money, or sit back and let the battery-powered car take them to where they need to go.

Google gave the technology its stamp of approval in 2010 by awarding Shweeb over $1 million for research and development, selecting it out of over 150,000 applicants.

But while personal rapid transit systems like Shweeb’s may be the bridge between personal vehicles and public transit that we need, they still lack investor support for large-scale deployment, leaving them to languish in small towns, amusement parks and airports.

Getting off the ground

The first Shweeb Bullet Pod system was built in 2007 as part of an ecological amusement park in Rotorua, New Zealand. Shweeb Holdings, the parent company of Shweeb-Can, developed the project.

The business model of initially attaching the technology to an amusement park allows investors to see the system working without too much financial risk on their part, said Stephen Bieda, vice-president of business development and communications at Shweeb-Can. The plan is to build a similar system in Niagara Falls using the same model with the hope that it will eventually expand to urban centres around the world, he said.

A true PRT service should provide 24-hour, on-demand, non-stop service, on a fully connected network. It should also use vehicles that are suited for individuals or small groups and have no need for human drivers, and should operate on tracks that are reserved exclusively for its vehicles. A few examples exist in Morgantown, West Virginia, Suncheon, South Korea, Masdar City, U.A.E., and London Heathrow Airport.

A report released last month by the Mineta Transportation Institute, a U.S. government-funded transportation research centre, found that PRT systems have “excellent levels of service and environmental sustainability if its infrastructure is integrated with solar power collection.”

This sounds like a convenient solution to road congestion, climate change and frustrating morning commutes. But if such a system already exists, why don’t we have one in every major urban centre?

The report explains that the PRT industry is in an early, tentative stage, and currently only has “a handful of credible suppliers who are struggling to find buyers or venture capital.” As such, the report says, no market for PRT currently exists.

Even a report by Frost and Sullivan, a technology consulting firm, which estimates a EURO 30 billion ($43 billion CDN) market for PRT systems by 2020, tempers its optimism by listing the hurdles the technology will have to get over before it can be a viable mass transit alternative. They include lack of funding and commitment from governments, lack of understanding by the general public, constant economic and technological support, the urgent need for operation and maintenance protocols, and the creation of a certification process.

What it really comes down to is that investors are nervous about investing their money in an unproven technology, said Nick Chu, research director of Creative Urban Projects, an urban planning consultancy in Toronto that specializes in cable cars. “No one wants to be first, everyone wants to be second,” he said, adding that nobody wants to put their name on a technology that might fail.

Bieda said Shweeb-Can has interested clients in 23 locations, but they all want to see a working model first. The public transit industry is monolithic, resistant to change and conservative, he said. But Shweeb seems determined to push the boundaries, even if it has to start in an amusement park.