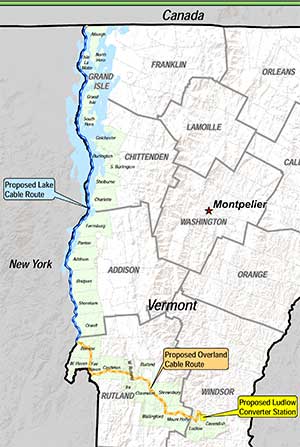 A map of the proposed route (courtesy of TDI New England)

Vermont’s Public Service Board granted siting approval in January, followed by the U.S. Army Corps of Engineers the following month. The only major permit remaining is one granted by President Barack Obama, needed for all energy transmission projects that cross international borders. U.S. Department of Energy officials have already recommended that the president grant his approval for the project.

Roughly two-thirds of the line will travel underwater through Lake Champlain, with the remaining portion running along existing rights-of-way. TDI New England has agreed to pay at least $283.5 million towards the cleanup of Lake Champlain over the line’s anticipated 40-year lifespan.

States across New England are in the process of determining how best to meet aggressive clean energy targets by 2020. ISO New England is projecting that 8,000 MW of power will be taken offline by 2020, requiring at least 6,300 MW from new sources. Supporters of imported clean energy from Canada argue that it will help states meet renewable energy targets in a cost-effective manner, while others argue that it won’t do as much to bolster local renewable energy generation.

The Massachusetts Clean Electricity Partnership was formed in February by TDI New England and other hydro producers to push the state legislature to support Massachusetts Governor Charlie Baker’s pro-hydro bill.