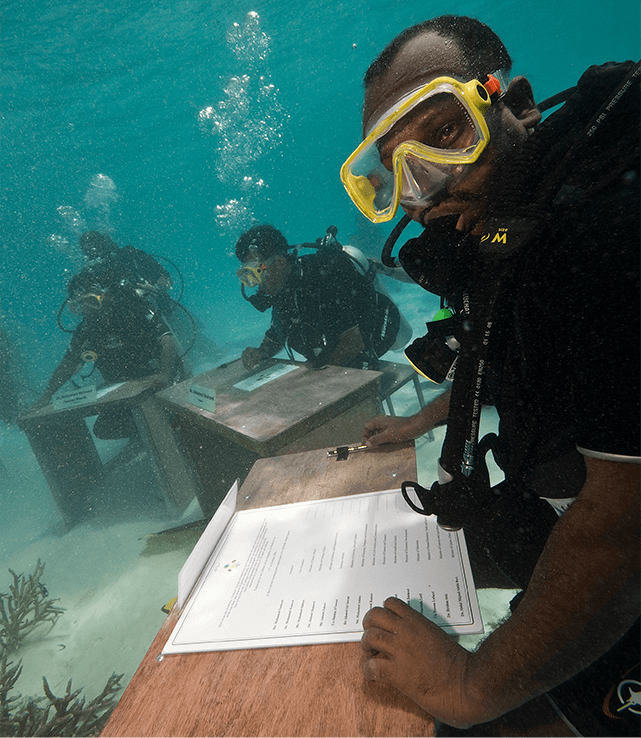 As far as publicity stunts go, it had the impact it deserved. On the morning of October 20, 2009, the president of Maldives along with 10 of his ministers, each in a wet suit and fully equipped with scuba gear, dove into the Indian Ocean and held a half-hour cabinet meeting – underwater.

It proved effective media bait seven weeks before the United Nations climate change conference in Copenhagen. The top politicians from this small island nation had a message they needed the world to hear: The Republic of Maldives will cease to exist if there is not serious collective action – taken now – against climate change.

“Their claim to fame is they are the lowest lying nation on earth,” said Abdulaziz Faghi, a senior energy specialist at the World Bank.

The Maldives is actually an archipelago of 1,192 coral islands stretched across 1,000 kilometres of ocean. It has a population of 385,000, a quarter of whom live in the capital city of Malé. An average ground elevation of less than five feet makes it extremely vulnerable to severe weather and rising sea levels associated with climate change.

It’s an unfair place to be, as the Maldives represents only 0.01 per cent of the global emissions influencing our climate. On a per capita basis, the average Maldivian is responsible for 3.3 metric tons of carbon dioxide emissions annually, or less than one-fifth what the average American emits. But that hasn’t stopped this island nation, located about 400 kilometres southwest of India, from leading by example.

Seven months before his underwater cabinet meeting, Maldives President Mohamed Nasheed unveiled a plan for his country to become carbon-neutral by 2020. To get the ball rolling, the government applied for financing through the $8 billion Climate Investment Funds, which is supported by the World Bank and several other multilateral investment banks. 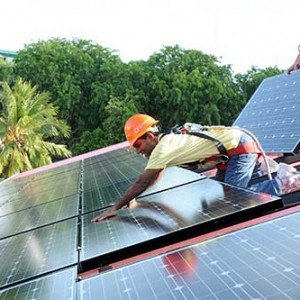 Solar panels are installed atop a hotel in the Maldives.

A detailed investment plan was approved in 2012 and financing secured for a project called ASPIRE, or Accelerating Sustainable Private Investments in Renewable Energy. Looking mostly at solar photovoltaic systems, the plan for Maldives classified the country’s 200 inhabited islands by size and electricity demand, and came up with a price (tariff) that local utilities would pay for solar power under long-term contract. The aim was to make the price enticing enough to lure investment from private developers.

There have already been two investor conferences in the Maldives and a roadshow to Singapore to create regional awareness of the plan. The World Bank’s role is to backstop projects in the event a utility defaults on payment, dramatically reducing investor risk. About 50 islands will be targeted – 10 smaller islands will go completely renewable, while most of the rest will pursue having 30 per cent of their electricity generated from a combination of solar, wind and biomass.

“On its own, it would be very difficult for the government to go to each island and develop that power with public financing,” said the World Bank’s Faghi, who is working on the project and leading an associated initiative that aims to map all the country’s renewable resources. He makes clear this isn’t just about reducing emissions as some kind of martyrdom in the fight against climate change. “The tariff would be lower than the cost currently paid for diesel, so that works out well for the local utilities,” he said.

The Maldives currently spends up to 20 per cent of its GDP on fossil fuels for power generation and as a marine fuel. All oil must be imported, and shipping relatively small volumes to a remote location doesn’t come cheap. The cost of generating electricity from diesel generators, for example, ranges from 31 to 46 cents per kilowatt-hour. Purchasing solar power for 25 cents or less and wind power for less than 15 cents is a bargain by comparison.

In other words, transitioning to renewables is viewed as an economic imperative. “It’s just unsustainable for such a small country to spend so much on fossil fuels,” Faghi said. “This is a poor country that needs to spend more of its money on education, health and other social sector services.”

The push has been on for the last decade to get more island nations to embrace renewable energy as a replacement for diesel. And falling technology costs, particularly around solar power, has created an opportunity that’s becoming increasingly difficult to overlook.

“Going forward, investing in domestic renewables makes more economic and environmental sense over continued imports of expensive and polluting fossil fuels,” according to a 2008 report from the Global Energy Network Institute, which attempted to quantify the renewable energy potential of 71 island states.

It estimated that all island states collectively spend more than $90 million (U.S.) each day importing oil, assuming a price of $100 a barrel. “In a time when oil prices are soaring and the effects of climate change are evident, using renewable sources for energy shouldn’t be seen only as a great investment or moral issue,” the report concluded. “It should rather be seen as a great investment with great moral value for the present, especially for small island states.”

Activity has intensified over the past year. The United Nations, having declared 2014 the International Year of Small Island Developing States, held a conference in Samoa in September and clean energy was a focus of discussion. One particular hotspot appears to be the Caribbean, where the 15 island states that are part of the organization Caricom recently committed to a regional renewable power target of 20 per cent by 2017 and 47 per cent by 2027.

“It is now up to member states to make the targets a reality through political and financial reform,” said Alexander Ochs, director of climate and energy at the Washington, D.C.-based Worldwatch Institute, which is helping Caricom develop its plan.

Adding momentum to the effort is the Carbon War Room’s Smart Island Economies program, which has challenged 10 Caribbean islands to aggressively begin the transition from fossil fuels to renewables. Four islands have so far signed up, including Aruba and Grenada, with the Turks and Caicos and Bahamas expected to join shortly.

“In the Caribbean, their power mix is anywhere from 97 per cent to 100 per cent fossil fuels, and their electricity sector essentially runs on diesel generators 24 hours a day,” said Justin Locke, director of islands for the Carbon War Room, which was founded by billionaire Sir Richard Branson.

Locke said most of these islands import their fuel from Venezuela and the cost has led to some of the highest regional electricity prices in the world. Moving away from diesel to renewable energy is a “no-brainer,” he added. “The political stars have aligned, and really everyone wants to move in that direction. It’s just a matter of how from a policy and ownership perspective.”

Hydrostor stores energy as compressed air that is pumped into large expandable cavities – kind of like big industrial-strength balloons – that are anchored to the bottom of the ocean floor. Aruba’s utility will use wind power to inject air into the cavities when there is a surplus of supply. When the wind isn’t blowing and extra electricity is needed, the air, which is under immense pressure from the ocean water above, is released to spin a turbine that generates power.

“We’re due to break ground on the facility in late 2014 and get it up and running in the first half of next year,” said Curtis VanWalleghem, chief executive of Hydrostor. The contract calls for 1 megawatt of storage that can run for six hours, but there is already talk about doubling the size of the facility. “Once they reached 15 per cent to 20 per cent renewables in their mix, they knew they needed to get into storage. The utility wants more wind because it’s cheaper than diesel, but they can’t get any more cheap wind without that storage.”

VanWalleghem said Aruba, which wants to become energy independent by 2020, is on track to get more than 50 per cent of its power from renewable sources later this year through a combination of rooftop solar and wind power, the latter taking advantage of the island’s constant windy conditions. It already stores energy in the form of ice blocks, which are created when there is surplus power. The ice is then later used to supply air conditioning in hotels during peak times when power is in short supply.

The Hydrostor system will help to further balance Aruba’s grid, which will become a showcase for the company’s technology. Already, word is starting to spread. “Storage seems to be hitting that turning point. It’s on everybody’s radar now,” VanWalleghem said.

Six thousand kilometres across the Atlantic Ocean, off the coast of North Africa, one island recently achieved what could one day become commonplace in small island countries: a grid powered 100 per cent by renewable energy.

El Hierro, the smallest of Spain’s seven Canary Islands, officially announced in June that it was no longer dependent on diesel fuel for its electricity supply. Since 2005, island officials and private partners have been implementing a plan to install five wind turbines with a combined generation capacity of 11.5 megawatts, as well as a massive pumped-storage hydroelectricity facility capable of generating an equal amount of power.

A wind turbine is erected on a hilltop on El Hierro, part of the Canary Islands.

“Nobody compares to El Hierro,” said Jose Etcheverry, a professor of environmental studies at Toronto’s York University who has followed the project closely. “It’s the first system of its kind built with renewables and storage in mind, and at this kind of scale.”

Not only does this wind-hydro system give El Hierro complete energy security, it has helped to create local jobs and skilled workers. It has also inspired El Hierro to go even further: The island’s renewable power system is being leveraged to encourage electric transportation, ecotourism and organic agriculture.

Pursuing such a path on a remote island is not without its challenges, Etcheverry said. The technology chosen has to be reliable, and much advance work must be done to train local workers on how to operate and maintain the systems. “That’s probably their biggest challenge, because if you make one mistake you’re in trouble. Equipment parts are hard to get, so you can’t afford those mistakes.”

The hope is that the learning done on El Hierro will spread to other islands in the Canary archipelago, where fuel costs are currently heavily subsidized by Spanish taxpayers. “They just need to redirect these diesel subsidies into renewables,” Etcheverry said.

All islands are different in their own way – for example, the Maldives doesn’t have the geology to support a pumped-storage hydro facility – but as more of these isolated communities experiment and implement, there’s a sense that the transition to renewables will pick up speed.

“We’re targeting about 30 or 40 islands right now,” said VanWallegham. “But a day doesn’t go by that we don’t get contacted by someone, somewhere.