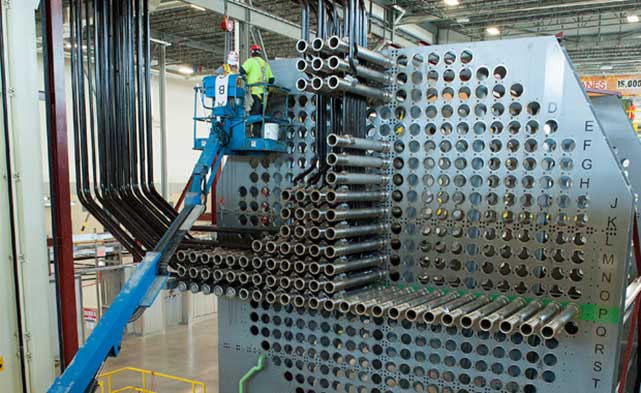 Chances are slim that shiny new nuclear plants will be built in Ontario. High upfront costs and a history of delays and cost overruns are among the reasons “new builds” will likely never happen in the province.

But there remains widespread debate over plans to refurbish existing reactors at the Darlington Nuclear Generating Station in Clarington, about an hour east of Toronto.

Ontario Power Generation, the province-owned electricity generator, is determined to rebuild the cores of four reactors at the Darlington site. Together, the four reactors represent about 3,500 megawatts of generating capacity and refurbishing them will extend their lives by about 30 years.

The utility estimates the project will carry a final price tag of $12.9 billion once completed a little over a decade from now. Is that a deal for Ontario ratepayers, or is there a better, less risky, and just as climate-friendly alternative?

Let’s put aside the standard anti-nuclear talking points about the risk of a Fukushima-style accident or the challenges and unknown costs involved with storing highly toxic nuclear waste far into the future. A new case study done by Vancouver-based Navius Research calls into question the wisdom of Ontario’s refurbishment plan in a world where solar power and energy storage costs are falling dramatically.

The Navius report, using a detailed model of Ontario’s electricity system that accounts for the current mix and performance of energy generation, simulated the grid for a full year under a variety of different conditions to see how it would respond.

It found that renewables in combination with the right amount of energy storage – in this case, compressed air energy storage (CAES) – and a small amount of natural gas generation would result in “equivalent GHGs and quite similar electricity system costs” compared to nuclear refurbishment. 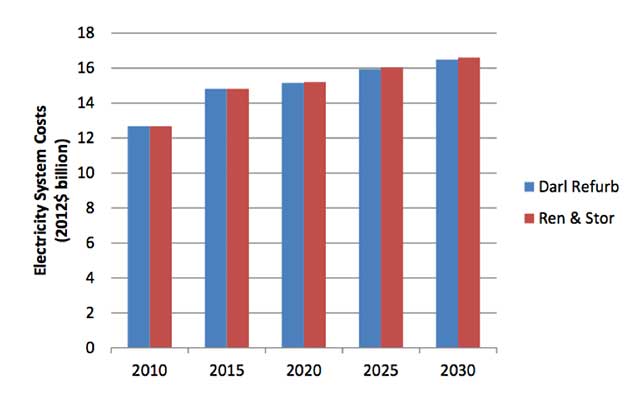 Jotham Peters, managing partner at Navius, said the conclusion is based on many assumptions, such as the future cost of solar and wind generation up to 2032. It also doesn’t take into account future transmission requirements and geographic limitations, such as the availability of geologically sufficient CAES sites.

But the findings are compelling enough that it should give Ontario pause before taking the plunge with Darlington, he said. “One of the main reasons we did this wasn’t to come up with a conclusive answer, but to say Ontario should look closer at this option.”

As with many other jurisdictions, Peters said solar is a potential bright spot for Ontario given rapidly falling technology costs (a drop of about 80 per cent since 2007) and the move to market procurement for large solar projects.

“If, by 2032, costs keep going down the way they’re going there should be a lot of opportunity for solar, and the nice thing about solar is that it’s always correlated to peak load,” he said. 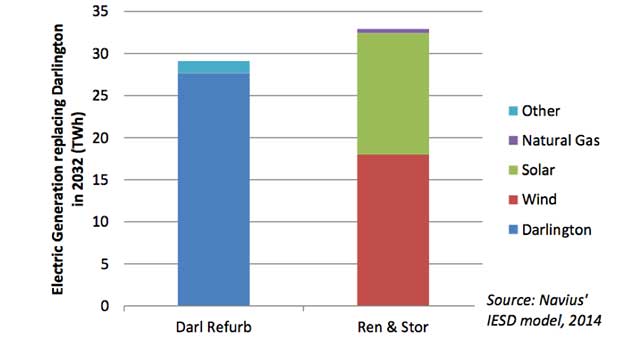 According to a report last fall from the U.S. Department of Energy, the installed cost of commercial and utility-scale solar is expected to fall to under a $1 per watt by 2032, according to the high range of analysts’ estimates.

But keep in mind, the report states, “2020 price projections are approximately half of what (the) same analysts projected five to 10 years ago.” In other words, costs could be even lower.

At the same time, considerable uncertainty remains over the potential for delays and cost overruns associated with nuclear power projects. Two years before construction is expected to begin at the Darlington site, project costs have already increased by $300 million, according to an independent assessment.

Another option for Ontario is to import more hydroelectric power from Quebec, an idea Premier Kathleen Wynne has supported. Navius didn’t model this option, but an October report from the Ontario Power Authority said existing transmission infrastructure isn’t adequate.

“Any significant firm imports from Quebec or Manitoba would require substantial investments in new transmission infrastructure to move the power from provincial boundaries to the Greater Toronto Area where most of Ontario’s consumer load is located,” according to the report.

That added cost would need to be factored into any potential deal with Quebec.