Known as the Regional Greenhouse Gas Initiative (RGGI), the organization vowed to reduce GHGs from power plants by 40 per cent from 2009 levels, the year the coalition was formed. With the announcement that an additional 30 per cent cut will be implemented in the coming decade, the RGGI has agreed to one of the most ambitious plans put before the group. 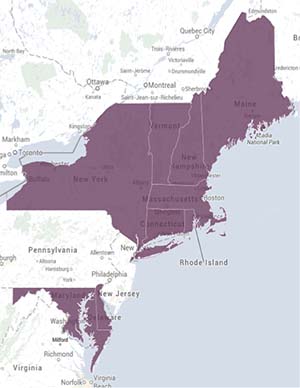 Under the latest proposal, the RGGI will cap emissions at 75.1 million tonnes of CO2 in 2021, gradually lowering the cap by 2.275 million tonnes annually until 2030.

Via carbon offset credits bought and sold by power companies, the RGGI’s efforts have overseen a drop in electricity prices of 3.4 per cent on average throughout the region. The coalition has raised more than $2.7 billion since its inception, money that’s been invested in energy efficiency, renewable energy projects and helping low-income families pay their electricity bills. All this while reducing ground-level air pollution worth an estimated $5.7 billion in public health benefits.

The plan is working. A recent analysis from the Acadia Center found that carbon dioxide emissions from the nine northeastern states had plummeted to just under 80 million tonnes since 2008, an overall reduction of 40 per cent.