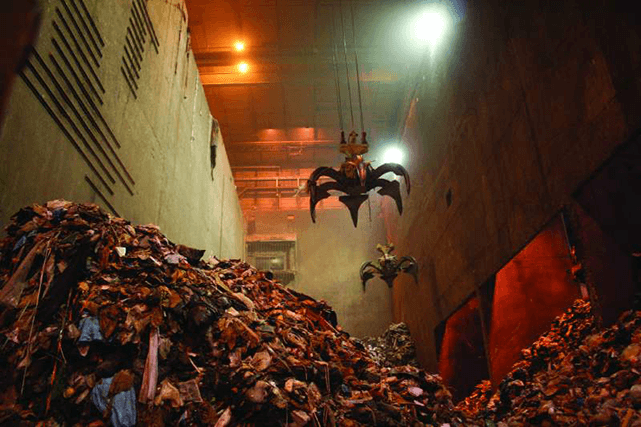 From the top of Amagerforbrænding, the largest of three garbage incineration plants located in downtown Copenhagen, is an idyllic panorama of the waterfront. A newly constructed opera house, donated by shipping magnate Maersk Mc-Kinney Moller, casts a shadow over the water several kilometres away. A new island, built by the municipality and covered with imported sand to act as a beachfront during the summer, is within walking distance. The plant has been embraced by the general public, with nearby residents so accustomed to it that the city council is currently considering a proposal for retrofitting the facility to include a fully functioning ski hill on top.

In Denmark, the burning of waste has been an accepted practice for over 40 years. Jan Gehl, a well-known Danish urban design architect, believes that this originally stemmed from space constraints in a country 38 times more densely populated than Canada. “We’ve never had the luxuries that North Americans enjoy, where you can easily find an inexpensive location for large-scale garbage disposal out of sight and out of mind. In the 1970s, we simply ran out of room, and this was our only option.”

But the Danes quickly realized the combustion of waste had other benefits, such as the production of electricity and heat. Incineration now falls more broadly into the waste-to-energy category. Countries such as Denmark and Japan have located their incinerators in urban centres so that the steam can be used to power or heat nearby homes.

Even as incineration facilities have proliferated throughout Europe and Asia over the past several decades, North America has been reluctant to embrace them. No new incinerators have been built in Canada or the United States for the past 15 years, due to well-organized public opposition. According to the Canadian Energy-from-Waste Coalition, only eight facilities exist in Canada, processing 3 per cent of the country’s municipal solid waste. Denmark, a country of just 5.5 million people, diverts 54 per cent of its waste to 29 incineration plants, many of them using the most advanced technologies on the market.

With Canada’s municipal waste volumes rising steadily on a per capita basis since 1980, there has been a growing need to find alternative waste disposal methods. Local opponents to new landfills, who express strong concern about soil and water contamination, have effectively convinced municipalities over the past decade to continue operating existing facilities that are rapidly filling up. To meet existing demand, Ontario alone maintains 32 large landfill sites, along with 958 smaller ones. Over 2,000 sites have been retired over the past century, according to the Ontario Ministry of the Environment.

As Canada struggles to meet its goal of reducing greenhouse-gas emissions 17 per cent below 2005 levels by 2020, leading sources of methane expulsion have faced greater scrutiny. Environment Canada reported that Canadian landfills in 2010 accounted for 20 per cent of national methane emissions. This is one area where utilities and private companies have been active in waste-to-energy, by setting up systems to capture and combust methane emitted from the breakdown of organic materials. The introduction of methane capture technology at 42 disposal sites in Canada has resulted in 25 per cent of methane emissions being transformed into energy. Methane capture systems have grown in popularity in Canada over the past decade compared to garbage incineration plants. They are less expensive to install, face muted community opposition and have received federal tax incentives and funding from pools of money, such as the Green Infrastructure Fund.

So is it better to burn or bury waste for clean electricity generation? The U.S. Environmental Protection Agency analyzed this question in a comprehensive life-cycle report published in conjunction with North Carolina State University in 2009. They determined that, if paired with a high diversion rate, the newest incineration technologies generate significantly more energy, while reducing the greenhouse-gas emissions and habitat loss that come from traditional landfills.

More than a decade since the last Canadian incinerators were built, municipalities are beginning to consider new waste-to-energy systems as part of their overall waste management strategy. Proposed facilities in Vancouver and Durham/York County, north of Toronto, each received city council approval last July. Since then, however, they have become ground zero for local opposition.

Resistance falls into two camps. The incinerators that the Canadian public has previously been exposed to, like the Algonquin energy-from-waste facility in central Ontario, are decades old and outfitted with obsolete technology. Residents of Vancouver and Durham/York fear these plants will bring about similarly-reduced air quality. Former Canadian Idol contestant Shane Wiebe has even written a protest song about it, called “landfill in the sky.”

University of Victoria climate scientist Andrew Weaver, however, says the science doesn’t support those fears. He states that most of the particulate matter, which used to be released by incinerators, is now captured by scrubbers and filters before being released into the air. Christian Nobel, a specialist in waste management at the Danish environmental consultancy Veksebo, points out that similar facilities easily pass Danish emissions standards, which are some of the strictest in the world. “Compared to other sources of air pollution human activities create, concerned citizens should not be focused on dioxins.”

The other suspicion, shared by many opponents of incineration, is that modern waste-to-energy plants undercut municipal recycling and diversion programs by creating a constant need for waste. Former Toronto mayor David Miller, a vocal opponent who instituted a ban on incineration within Toronto and fought the proposed Durham/York waste-to-energy plant while in office, describes incineration as “expensive and polluting, but most of all damaging to recycling efforts.”

Nobel, however, disputes this claim. Danish municipalities have placed diversion at the top of their list, recycling 54 per cent of their waste, and burning 42 per cent. What can’t be burned safely is diverted to one of only two landfills in the country, and chemicals, paint and electronics are processed at special facilities.

A strong recycling system, explains Matt McCulloch, director of corporate consulting at the Pembina Institute, is paramount to constructing successful incineration facilities within Canada. “Waste-to-energy is not an excuse to ignore or sideline community recycling systems. Carefully sorting through waste to recycle as much as possible, while diverting the rest to waste-to-energy facilities, is the optimal scenario for Canadian municipalities.”

Several other projects have been developed or are in the works within Canada that produce energy in a different manner from combustion or methane capture. A plasma gasification facility in Ottawa, run by Plasco Energy Group, recently signed a new deal with the city to continue processing unprocessed and unsorted solid waste. A proposed waste-to-ethanol plant in Edmonton, run by Montreal-based Enerkem has received provincial funding and is currently under construction.

The private sector has grown more enthusiastic about Canadian waste-to-energy opportunities as well, led by industry leader Waste Management of Houston, Texas. While continuing to invest in methane capture throughout North America, the company set up a venture capital arm about five years ago to invest in startups focused on expanding recycling and managing waste. It has spent hundreds of millions since then, including the purchase of an 11 per cent stake in Enerkem in 2010. More recently, it invested $8.5 million directly into Enerkem’s waste-to-ethanol facility in Edmonton.

“We’re really focused on finding those technologies and processes that can help us efficiently segregate materials that are in our waste streams,” says Joe Vaillancourt, managing director in the organic growth group at Waste Management. Once segregated, some materials can be recycled, some turned into green chemicals, some into energy. “We’ve got about 40 investments so far,” he says.

With enthusiasm for new landfills waning and utilities hungry for further energy generation, more cities are sure to follow Vancouver’s and Ottawa’s lead in considering incineration in the years ahead. But it promises to be a tough haul.