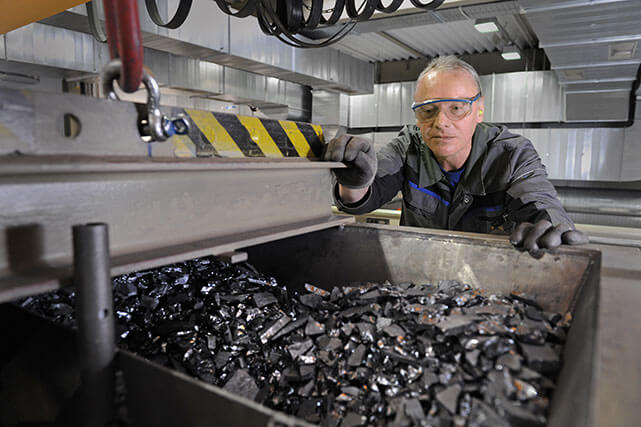 SolarWorld of Germany has voluntarily contracted with U.S. partners to recycle old modules.

Green Mountain Power, a local electric utility in Vermont, broke ground last year on a two-megawatt solar farm stretching across nearly 10 acres of garbage, otherwise known as the Rutland City landfill. With more than 10,000 old or closed down municipal landfills scattered across the United States, that’s a lot of brownfield with the potential for no-hassle development.

After all, who’s going to raise environmental concerns?

But there’s a certain irony to such projects. When the 7,700 solar photovoltaic (PV) panels installed atop the old Rutland landfill reach the end of their operational lives, they could ultimately end up buried in a landfill – or not, depending on what policies and programs are put in place over the next decade to make sure this clean source of power doesn’t become another dirty problem passed on to the next generation.

Fact is, solar panels are mostly electronic waste – a mix of semiconductors, wiring and power electronics. In North America alone about 20 gigawatts of solar capacity has been installed, working out to roughly 100 million solar panels destined to become junk in 15 to 30 years.

“As the PV market continues to grow, so will waste, even if it only appears after a relatively long time delay,” Queen’s University researchers Joshua Pearce and Nicole McDonald wrote in their still-relevant 2010 paper on solar producer responsibility.

By 2020, hundreds of gigawatts of solar systems are expected to be powering the globe, representing billions of panels, some containing heavy metals such as cadmium, lead and arsenic. To put this in perspective, that’s more iPhones and iPads sold globally to date, keeping in mind that as e-waste a single solar panel weighs 600 times more than a typical smart phone.

And it’s not just product waste. Green, renewable power may come out of solar modules, but many toxic materials and dangerous processes go into making them. Highly corrosive chemicals like hydrochloric and sulphuric acid, explosive silane gas, extremely toxic tetrachloride, arsine gas and the potent greenhouse gas sulphur hexafluoride are among the nasty ingredients in the solar cookbook. 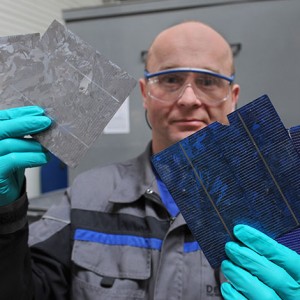 Over the coming years, solar manufacturers won’t just be judged on whether their solar panels are recycled or not. How they manage and minimize waste, how productive they are with resources such as water and energy, and the importance they place on workplace safety, diversity and worker rights will increasingly reflect on the reputations of individual companies and the industry as a whole.

“The PV industry’s continued growth makes it critical that action be taken now to reduce the use of toxic chemicals, develop responsible recycling systems, and protect workers throughout global PV supply chains,” according to the non-profit Silicon Valley Toxics Coalition (SVTC), which reports annually on the sustainability performance of solar module manufacturers.

There’s no question of solar power’s green credentials. It is undeniably the world’s cleanest source of electricity, and the solid waste it produces is still tiny compared to traditional energy sources. But its record isn’t completely clean, and as the technology becomes more ubiquitous, it will become more important than ever to shine a light on the darker side of the sun.

Shining a light is what the SVTC’s Solar Scorecard project is designed to do. Five scorecards have been released so far. The latest, released last November, was based on survey responses from solar manufacturers and the information they make publicly available. In all, it ranked 37 companies that represent roughly 75 per cent of solar manufacturers.

Manufacturers are scored on 12 criteria, including recycling, water use, GHG emissions, chemical reduction efforts, use of conflict minerals and commitment to worker rights, health and safety. Transparency, in the form of public disclosure of key sustainability performance indicators, is given heavy weight.

Right off the bat, it’s clear that transparency is widely lacking in the industry. Only seven of 37 companies responded to SVTC’s survey questions, and the majority scored less than 40 out of 100 largely because of non-disclosure in public reports. Companies that have been critical of SVTC’s scorecard argue that the results are not a true reflection of their sustainability performance. If true, it’s a good argument for improving disclosure practices.

The highest-scoring manufacturer was Changzhou, China-based Trina Solar, which has occupied first place for three straight years. The company scored 80 per cent or higher on 11 of 12 criteria, and achieved perfect scores on eight, giving it a total score of 92 out of 100. Its biggest weakness was related to lack of disclosure around the use of conflict minerals – a major weak spot for the entire industry.

Corporate Knights Capital produced a solar ranking of its own, using a similar methodology applied to our Best 50 and Global 100 rankings. Tempe, Arizona-based First Solar came in first, compared to a still respectable seventh place on the SVTC scorecard. SunPower ranked second on both.

The complete excel with all 12 KPIs can be downloaded here.

The only Canadian-headquartered company considered by both reports was Canadian Solar, which is based in Guelph, Ontario. It scored only 14 out of 100 on the SVTC scorecard and was off the radar in the Corporate Knights Capital ranking.

Canadian Solar’s corporate social responsibility report could not be found on its website. When CK asked for a copy of the report, a company spokesperson asked why we wanted it – a strange question considering the mandate of our magazine. What we eventually received was a poorly written, error-filled, grammatically awkward document that didn’t disclose much in terms of data. “That is what we have,” the spokesperson said. “The pretty version is in Chinese.”

For socially responsible investors looking to put their money into solar stocks, or solar consumers looking for the most sustainable module manufacturers, it’s not an encouraging sign. Many companies in the industry could certainly do better.

One move Canadian Solar did make back in 2009 was to join PV Cycle, a Brussels, Belgium-based organization that supports the take-back and recycling of solar PV modules when they reach the end of their lives.
“We continue to proactively take responsibility for developing effective recycling programs,” Canadian Solar founder and CEO Shawn Qu said at the time.

PV Cycle is focused only on European countries, and has set up a network of national partners that help module manufacturers comply with European Union e-waste legislation, which in 2012 was extended to include PV modules. Prior to that, PV Cycle was a voluntary industry program.

About 11,000 tonnes of modules, more than half from Germany, have been recycled since the organization became operational in 2010. To date, it collects modules from 20 countries through a network of 350 collection points. Its aim is to reach recycling rates of 85 per cent by 2020.

While companies such as First Solar and SolarWorld have voluntarily worked to recycle their solar modules in North America, there are no regulations or voluntary industry-wide programs available in Canada or the United States. In Canada, if you’ve got an old panel installed during the 1970s or a newer panel that’s broken, there are no municipal drop-off locations – the likely destination is the dump.

But where hundreds of solar panels might have been installed in the 70s, hundreds of thousands have been installed over the past few years, mostly in Ontario. The province’s energy ministry requires developers to submit a Decommissioning Planning Report explaining how materials will be removed from a site when a project reaches the end of its useful life – expected to be 20 to 30 years. In these reports, companies typically promise to responsibly dispose of materials or recycle them “where economical,” but no details or guarantees are given.

Some solar installers in Ontario, meanwhile, appear to be misleading customers. Corporate Knights reviewed the websites of several installers that had the same template response to questions about panel recycling. “Yes, programs exist to recycle your solar power system.”

What are these programs? Who runs them? How can a customer investigate this more? No details are provided – nor could they be. 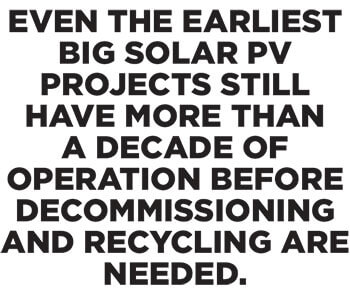 “Stewardship Ontario isn’t involved in any programs for solar panels and there isn’t any legislation,” says Alastair Harris-Cartwright, director of communications at the Canadian Stewardship Services Alliance. “I’m not aware of any Ontario companies tackling this issue.”

The North American industry is acutely aware of the need for recycling. “Recycling has to be part of what we do,” said John Smirnow, vice-president of trade and competitiveness for the U.S. Solar Energy Industries Association, speaking at the Solar Power International conference in 2013. “For the solar industry to be truly sustainable, the whole supply chain has to be.”

But the industry’s position is that the issue, while important, isn’t urgent. “Solar PV is growing quickly, but it is in its infancy,” says John Gorman, president and CEO of the Canadian Solar Industries Association (CanSIA). “Even the earliest solar PV systems have more than a decade of operation remaining before decommissioning is required.”

Gorman was in Paris in late April attending an International Energy Agency (IEA) executive committee meeting for solar energy. One of the issues discussed was Task 12, a priority initiative that deals with corporate social and environmental responsibility practices in the solar industry.

Out of that initiative, a study to be released in September will look at international laws and regulations around lifecycle management and recycling of solar equipment. Gorman says release of that study will be followed by regulations, which will flow regionally and nationally. “The IEA work on this issue is timely, and will drive environmentally responsible recycling here in Canada,” he says.

Putting a European-style recycling program together, similar to what PV Cycle has done, means having enough material to make the investment economical. At the moment, absent of regulation, it costs less for a developer or manufacturer to send PV panels to a landfill.

It’s a classic chicken-and-egg dilemma, says Patrick Bateman, policy and research advisor at CanSIA. “Recycling programs, whether for glass, plastic, electronic devices or solar modules, require a business model with a level of profitability to become established,” he says.

“There is very little to recycle in Canada today apart from process rejection or customer returns, as installed modules last over 25 years and we just started deploying at scale.”

CanSIA, which represents the Canadian industry, doesn’t have this information on its website. Solar installers, the first point of contact with solar consumers, are equally absent from the discussion, while most manufacturers – compared to many other industries – get a poor grade on disclosure.

Simply put, an industry that thrives on the light of the sun shouldn’t have customers kept in the dark, whether the issue is recycling or sustainability performance in general.