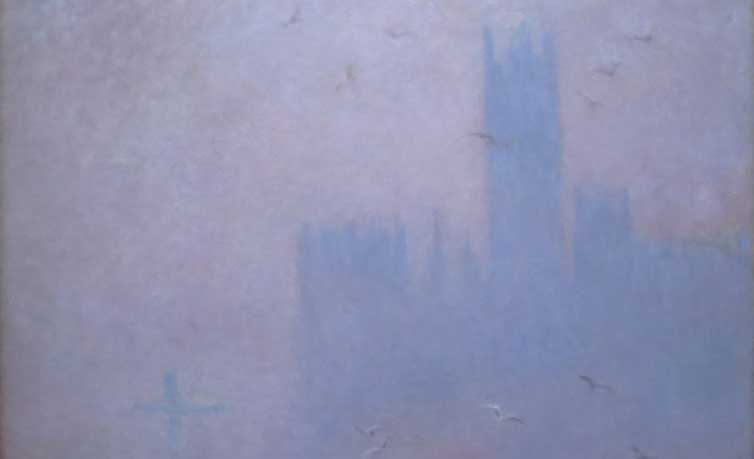 Seagulls, the River Thames and the Houses of Parliament by Claude Monet

Impressionist painter Claude Monet was able to see beauty in the swirl of fog encompassing Britain’s Houses of Parliament at the end of the 19th century. Most people regarded it as a very unpleasant inconvenience. Today, Londoners recognize the sources of the city’s current air quality problems: diesel vehicle exhaust and natural gas combustion for heating and cooking. Back in the 19th century, a small group of architects and scientists was just beginning to recognize the fog Monet painted as a threat to people, buildings and the city itself.

Officially known as the Palace of Westminster, the current Houses of Parliament were built between 1840 and 1870, after the medieval building was destroyed by fire. The reconstruction was the grandest architectural project of 19th-century Britain. From fierce debates about the style of the building to the installation of new heating and cooling technologies, the project captured the attention of politicians and public alike.

Mysteriously, the stone chosen for the building began to show signs of rapid decay while the building was still under construction. It soon became evident that the cause of that decay was London’s soot-filled air.

This embarrassing and expensive turn of events quickly contributed to new ideas about the environmental management of the city. By century’s end the government had passed new laws regulating the air of London, forerunners to contemporary clean air laws. A seemingly solid part of the city – one of its buildings – had enabled a new understanding of its most intangible element: the air.

My research on the architectural history of the Houses of Parliament reveals the surprising story of a building whose problems helped speed the creation of these new environmental laws.

At the start of the reconstruction, the government commissioned four experts to select stone for the building. The stone’s appearance would have to represent Great Britain’s growing political and industrial power. It also had to be durable enough to last as long as the British Empire. Two prominent geologists of the day, William Smith and Henry de la Beche, joined with a well-known sculptor and the palace’s architect, Charles Barry, to make a recommendation.

Concerned that some buildings weathered faster than others in Britain’s cold, rainy climate, the group went on an extensive tour to quarries and medieval buildings around Britain to gather data for their decision. They based their eventual choice of a magnesium limestone on further chemical analysis by Professor John Frederic Daniell, who predicted that the molecular composition of the limestone would resist weathering.

In the early 1800s architects believed that weathering of buildings was caused by the passage of time and the effects of observable weather like rain or ice. As industrialization increased, they and other experts began to suspect that additional atmospheric effects also played a role. But the nature of these effects and their causes was not yet understood.

As early as the 17th century, residents and visitors had complained about the atmosphere of London. John Evelyn lamented the “Clowds of Smoake and Sulphur, so full of Stink and Darknesse” in Fumifugium, his 1661 treatise on air. With its air filled with smoke from thousands of coal fires and without regularly favorable winds, London was already blackened with soot.

Its atmospheric conditions only worsened as population and industry grew, adding ever more chimneys to the skyline. In 1816, one Londoner described visitors’ shock at encountering the “dirt and nastiness” of the city’s blackened air. In his 1852 novel “Bleak House,” Charles Dickens included a description of the notorious “London particulars,” the fogs when “streets were so full of dense brown smoke that scarcely anything was to be seen.”

By this time, scientists in Great Britain had begun to offer some explanations for the worsening atmosphere and its damaging effect on buildings. Robert Angus Smith performed a series of experiments on rainfall that allowed him to conclude that the atmosphere of industrial Britain contained measurable quantities of sulphuric acid. He concluded that a new phenomenon that he named acid rain corroded the surfaces of buildings, causing their premature decay.

Parliamentary inquiries into the decay of stones at the Houses of Parliament took note of Smith’s scientific conclusions and their implication: the urban atmosphere of the 19th century threatened not only the well-being of people but the physical fabric of cities.

But what was the solution when the economic might of the British empire depended upon the chimneys and boilers of its furnaces? London and other British cities already had one legal instrument relevant to the crisis: nuisance law. Established under medieval common law, a nuisance was simply an activity or a structure on one property that adversely affected another property. Nuisance law dealt with the resolution of such conflicts, typically by ordering the cessation of the nuisance or by recommending the payment of damages.

In the 19th-century city, however, cause and effect could be very distant from one another. If the Houses of Parliament were being damaged by smoke, how could a judge determine which chimney the smoke had come from? Statutory law supplied a different approach with laws that regulated pollution at the source.

Over the latter half of the 19th century, Parliament passed new laws that allowed municipal authorities to set limits on the emission of smoke from factories. The 1853 Metropolitan Smoke Abatement Act imposed the first constraints on the production of smoke in the city of London. The 1875 Public Health Act included provisions for smoke prevention that applied to the entire nation.

Many other social and economic developments during the 19th century contributed to rising awareness of air pollution and to the formulation of environmental laws. But one of the most direct contributions was triggered by the Houses of Parliament. Architecture was an early victim of the effects of industrialization and an early protagonist in the remedies developed to combat them.

This article first appeared in The Conversation