Finland is poised to become the most advanced country in the world regarding long-term nuclear storage facilities. In November it received government approval for a licence to begin construction on the Onkalo repository at Olkiluoto in western Finland. The rock storage facility is being built by Posiva, a company jointly owned by two of Finland’s largest utilities.

“The construction licence granted now is the first in the world for a spent nuclear fuel disposal facility,” said Olli Rehn, the country’s minister of economic affairs. “Finland is an international pioneer in nuclear waste management, which also obliges us to take care of matters responsibly and safely in [the] future.” Once completed, the encapsulation and disposal facility will be capable of permanently storing up to 6,500 tonnes of uranium. 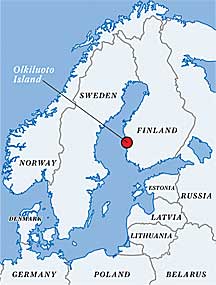 Sweden is also in the planning stages of long-term nuclear storage, but is at least five years behind the Finnish schedule. Other countries like the U.K. and the U.S. have seen their efforts stall in the face of political opposition.

The process of finding an optimal location for long-term nuclear storage in Finland began back in the 1980s, with the Olkiluoto location eventually selected in 2000 to become the world’s first deep geological repository of spent nuclear fuel.

Disposal is expected to commence in 2023. The retired fuel rods will be removed from temporary storage in spent fuel pools placed inside iron and copper capsules. These capsules will then be buried about 400 metres underground and packed with bentonite clay. Once the facility has reached its capacity, it will be entirely buried and sealed in for the next 100,000 years – the amount of time required to fully dispel radioactivity.

The total estimated cost of the project is $3.5 billion (U.S.) over a 100-year period, and will be largely funded by a nuclear storage fund that was created in 1988. Utilities generating nuclear waste have been paying into this fund annually according to a target that is regularly adjusted, a decision made to ensure that enough money would be set aside to pay for the construction of the Onkalo facility.