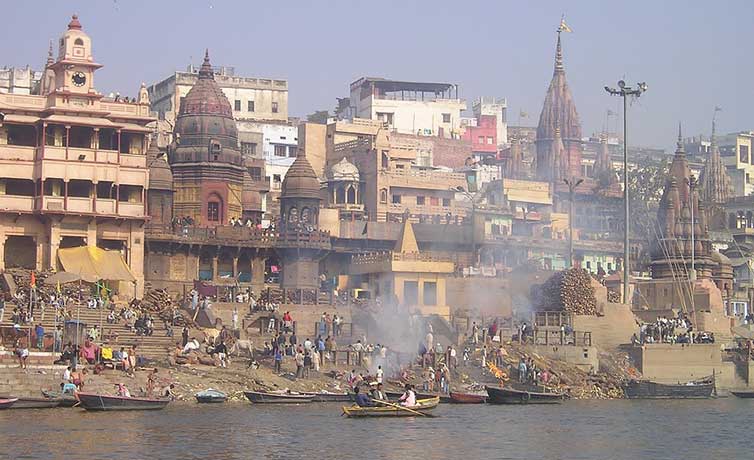 Cremation along the shore of the Ganges.

Revered for far more than its contribution to Indian civilization, the Ganges represents the goddess of salvation, Ganga. As a symbol of purity in Hindu mythology, the holy river is thought to cleanse believers both spiritually and physically with its waters.

Today, however, the Ganges is far from pure. Raw sewage from 29 cities mixes with the ashes of more than 30,000 believers cremated in the river each year, not to mention countless religious idols, animal carcasses, and tons of trash. In the city of Kanpur, some 70 per cent of people exposed to the river’s waters contract a disease, according to Newsweek.

Narendra Modi’s Administration marked the end of the Indian National Congress party’s 30-year reign in 2014 with a vow to end “business as usual,” through greater foreign direct investment, stopping systemic corruption, a stronger focus on cleanliness – and a new Ganges clean-up program. “Mother Ganga needs someone to take her out of this dirt, and she’s chosen me to do the work,” declared the new prime minister.

While the Indian government has tried to clean the Ganges before, the river remains stubbornly unfit for consumption, caught between the traditions of a centuries-old religion and the consequences of an industrializing nation.

To truly clean up this river, the government must find ways to change peoples’ behavior – always a tricky thing when it comes to water and sanitation projects – and to do so without compromising the party’s Hindu identity.

A symbol of purity under threat

The Ganges flows more than 1,500 miles across northern India, from the Himalayas in the west, to the Bay of Bengal in the east. Home to nearly 40 per cent of India’s 1.3 billion people and its most productive agricultural areas, the Ganges basin is being threatened by both traditional industrial sources of pollution and its place in the Hindu cosmos.

A significant source of industrial pollution comes from the city of Kanpur. In addition to more than 400 tons of solid waste produced every day, the city’s 400 tanneries produce eight per cent of the world’s leather supply. Leather production relies on a combination of toxic chemicals, such as lye and chromium, whose effluent seeps into the groundwater and eventually into the river. Thirty million litres of highly toxic water makes its way every day to a state-run treatment plant on the outskirts of the city, but it is estimated that only 17 million litres are actually treated, leaving the rest to flow through agricultural land and communities on its way to the Ganges.

Deeply intertwined in the Hindu faith is the city of Varanasi, believed to be the gateway to moksha, or liberation from the cycle of rebirth. Millions visit the ghats along the riverbank every year to make offerings on behalf of their relatives in the afterlife. An estimated 100 bodies a day are cremated at Manikarnika, one of the most revered ghats for Hindus, where a funeral pyre burns 24 hours a day, 365 days a year. Flowers and incense sticks, offered by the families of the deceased, float along the river with the corpses of the poor, whose families couldn’t afford the nearly 7,000-rupee cremation fee.

In addition to its role in the afterlife, the Ganges hosts a number of festivals for the living. Kumbh Mela is celebrated once every 12 years for 55 days in Allahabad, where the Ganges, Yamuna, and Saraswati rivers meet. The festival can draw more than 80 million worshippers to bathe, pray, and live on the banks of the Ganges for days at a time, with little in the way of sanitation facilities.

The burgeoning crowds of faithful and booming industry are taking their toll. In 2013, tests conducted by the Uttar Pradesh state pollution board found levels of organic pollution in the Ganges more than double acceptable levels after the first day of the Kumbh Mela festival.

The Sankat Mochan Foundation, a non-governmental organizations devoted to cleaning the Ganges, has measured fecal coliform bacteria, linked to waterborne diseases such as cholera and dysentery, at more than 175 times desirable levels.

Despite the risks, pilgrims, visitors, and children alike continue to bathe, cook, and even take swimming lessons in the Ganges – sometimes just downstream from cremation sites.

“Obeisance to the Ganges”

Led by the newly-created Ministry of Water Resources, River Development, and Ganga Rejuvenation, the government-funded Namami Gange (“obeisance to the Ganges”) project is a three-phased commitment to spend 200 billion rupees – more than $3 billion – on river restoration activities.

The project will first focus on cleaning the surface of the river by investing in skimming technology, installing rural sewage drains, and modernizing crematoria. Next, the government plans to address industrial pollution entering the river by increasing the treatment capacity of municipal wastewater plants. Finally, as a more long-term goal, the project aims to increase water-use efficiency and improve surface irrigation.

The government has made similar pushes before. Launched in 1986 by the Rajiv Gandhi Administration, the Ganga Action Plan, is a clear predecessor to the Namami Gange. The Ganga Action Plan’s goals similarly included improving the water quality of the river through the interception and diversion of sewage and building new wastewater treatment plants and crematoria. While the Plan led to 35 new sewage treatment plants along the river over 30 years, their capacity was based on demand levels at the start of the project, not those projected for the future. As a result, the plants are able to treat only a small percentage of the sewage generated today. The project ultimately cost 9.1 billion rupees, or $130 million.

Evaluation committees attributed the project’s failure to its preoccupation with infrastructure, unclear delineation of authority, lack of support from state government, and insufficient monitoring.

Narrowing the divide between science and faith

Two years after the launch of the Namami Gange project, results of the infrastructure and regulation efforts are slowly taking hold. According to the Ministry of Water Resources, as of July 2016, river surface cleaning has begun in six cities; 65 of 573 industries along the river have been closed due to non-compliance; and 59 towns have been surveyed for repair and modernization of crematoria, drains, and other public amenities.

But it’s unclear if any more attention is being paid to the non-technical elements of the river’s problems – namely how people perceive the river and their personal impact on it.

Behavior change is increasingly understood by public health experts around the world as critical to the success of water and sanitation projects. As Hans-Joachim Mosler has written, efforts to provide people with water, sanitation, and hygiene “hardware” must be accompanied by programs that promote “software” changes too. No effort to reduce diarrheal disease and death has been successful without behavior change to increase hand washing and reduce open defecation, for example.

Mosler developed a model employed by such organizations as Oxfam and the Red Cross to help practitioners understand how a person thinks and feels about an issue, such as hand washing, and identify interventions that account for social norms, previously held beliefs, and the confidence that he or she can sustain the new behavior.

Along the Ganges, reaching everyday people who drink, swim, pray, cremate their dead, and yes, defecate in the river will clearly require greater outreach to the Hindu spiritual community. There are strong partners already in place. Groups such as the Ganga Action Parivar, a non-profit launched by the Dalai Lama and the spiritual guru, Sadhvi Saraswati, have made it their mission to address behavior change by fostering more cross-sector collaboration between scientists, government, the media, and faith leaders.

Saraswati believes that faith-based leaders are uniquely positioned to understand the devotion of Hindus along the river and can bolster conservation efforts by changing the language used to reach people. For instance, a tone that implies a devotee is harming the river through pollution could be offensive, even sacrilegious, as the river is considered in some ways untouchable. Instead, Saraswati suggests focusing on the effect of pollution on the flora and fauna in the river, appealing to the Hindu belief that humanity is inextricably linked to the natural world.

Another spiritual leader, Mata Amrtanandamayi Devi, known as Amma or “mother” to her followers, donated $15 million in 2015 to jumpstart Modi’s effort to ensure all Indians are using toilets by 2019. “Only some of what is called the Ganges today is the original pure water,” she told The Guardian. “The rest is sewage and factory waste.”

Amrtanandamayi noted that building toilets is not enough, people must also be encouraged to use them. “It isn’t really a preference, but has become a habit due to lack of other options,” she said. “Proper education will certainly create a change.”

A spokesperson said her non-profit, Embracing the World, will provide training in villages where new toilets are built.

Such guidance and outreach by Hindu spiritual leaders is critical to reaching the many millions of people who have a small hand in the future of the Ganges. The Modi Administration’s vows to improve infrastructure and substantially increase funding is an important first step to cleaning the Ganges. But it may be that efforts by NGOs and spiritual leaders to reach out to small villages, devout pilgrims, and grieving relatives will be most critical to its eventual success.

This article first appeared on the New Security Beat