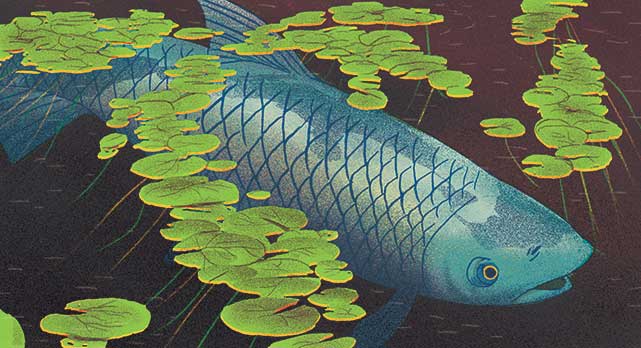 Within days, Fisheries and Oceans Canada (DFO) and the Ontario Ministry of Natural Resources and Forestry were mobilized to root out other Asian carp. Four weeks later, five more mature grass carp were caught at a Toronto islands marina. It left McDonald and her colleagues wondering – had the invasion of the destructive Asian carp in the Great Lakes finally begun?

Grass carp (which, along with silver, bighead and black carp are known as Asian carp) were first imported to America in 1963 on a recommendation from the UN Food and Agriculture Organization. It was hoped that grass carp, a voracious plant-eater, would consume vegetation clogging irrigation canals and ponds used in the South’s burgeoning aquaculture industry. Silvers and bigheads followed in the early 1970s, put to work cleaning sewage lagoons in counties unable to afford more technologically sophisticated sewage treatments. Lastly, black carp were imported in the 1980s to eat disease-carrying snails that were killing pond-raised catfish.

The first grass carp were found in the wild in 1966, their escape facilitated by lax biosecurity standards and hubris regarding their ecological impacts. Over several decades, silvers and bigheads (the two species most worrisome to the Great Lakes today) swam north through the Mississippi watershed. The Illinois River connects them to Lake Michigan. Silvers and bigheads are now 122 kilometres from Chicago, kept back by a $9 million electric fence that barge captains decry as a safety hazard and biologists fear can’t adequately repel Asian carp.

At the heart of fears over Asian carp in the Great Lakes is a deep anxiety over what impact the voracious filter-feeding silver and bighead carps will inflict on native fishes. They consume vast quantities of phyto- and zooplankton, which form the base of the aquatic foodweb. Researchers worry the addition of countless Asian carp to the Great Lakes will reduce food supplies for species like rainbow smelt; as populations of prey species such as the smelt decline for lack of food, higher-level predators like lake trout and coho salmon that rely on prey fish will dwindle.

Biologists also fear for Ontario’s wetlands. Grass carp are capable of dramatically weakening wetlands by reducing reeds and grasses integral to shoreline stability. Ontario’s coastal wetlands are also a vital nursery for more than half the fish found in the Great Lakes.

University of Toronto conservation biologist Nick Mandrak was part of a team that recently assessed grass carp’s anticipated impacts in the basin. The complete findings, which were released in late 2015, aren’t good. Ontario has already lost 70 per cent of its historic wetlands due to urbanization, agricultural expansion and the effects of other invasive species like common carp. “When [grass carp] are stocked at very high densities they can completely remove all of the vegetation in a pond,” Mandrak said. If they reach those densities in the Great Lakes they could “severely decimate” coastal wetlands throughout Ontario.

In response, DFO built a $400,000 Asian carp research lab at the Canada Centre for Inland Waters in Burlington, Ontario, in 2014. The lab emerged from $17.5 million in funding from Ottawa to fight Asian carp first announced in 2012, and has complemented the department’s strong monitoring efforts in the Great Lakes’ tributary rivers. Along with Ontario’s Ministry of Natural Resources and Forestry, DFO has conducted field exercises with state and federal resource agencies in the American Midwest to swap best practices for stymieing carp.

Last year, Quebec joined Ontario and the federal government in becoming a member of the Asian Carp Regional Coordinating Committee (ACRCC). This American federal agency overseen by the U.S. Fish and Wildlife Service and the Environmental Protection Agency directs money towards better management and control of Asian carp. In 2015, the ACRCC allocated more than $74 million (U.S.) towards 43 projects throughout the Great Lakes basin. Canadian officials also participate in the Great Lakes Commission, the Great Lakes and St. Lawrence Cities Initiative and a host of other working groups and committees tackling the carp crisis.

In November, McDonald learned the grass carp captured on Toronto’s shore were hatchery born. “Good news on the invasive front,” she said. Knowing the fish weren’t born in the wild gives TRCA and the government breathing room to formulate a management strategy knowing – as much as they can ever know what’s going on beneath the water – that Ontario has yet to witness a full-blown invasion of Asian carp.

Still, McDonald isn’t taking any chances. The 9.3-hectare wetland construction project she’s overseeing will enhance fish, bird and amphibian habitat on the city’s lakefront; it’s an ideal natural environment for Asian carp. Yet regardless of where the captured grass carp originated, McDonald’s wetland will contain gates to keep invasive fish out.

Just in case more grass carp are lurking nearby.