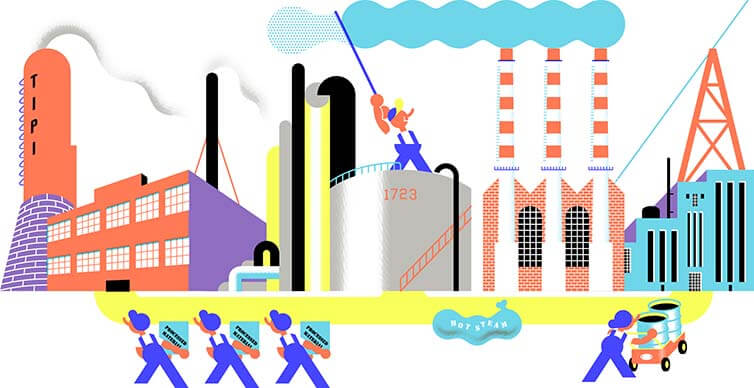 Nature does not produce garbage. Fungus decomposes rotting wood, supplying plants in the soil with nutrients. Animals eat the plants as sustenance, eventually fertilizing the soil with excrement. Each action forms part of a complex web of symbiotic linkages.

The factories in Kalundborg, Denmark, have taken a tip from nature.

The tiny seaside village of Kalundborg is only 100 kilometres from Copenhagen, but has long existed in relative confinement. Isolation, it turns out, was one of the greatest assets in Kalundborg’s industrial development.

“Basically, all the CEOs lived and worked in Kalundborg, they met [up] after-hours and had some of the same interests,” says Per Møller, head of Symbiosis Center Denmark, a symbiosis knowledge centre based out of Kalundborg. “And if you’re really dedicated to the job you’re doing, then sometimes you also start talking together with other industrial partners outside work.”

The small port village was also in need of a crucial resource for industry – groundwater. This collective lack of resources prompted local leaders of industry to ask a crucial question: What if we worked together?

Instead of depleting local groundwater, the Statoil oil refinery made an agreement with the Kalundborg municipality in 1961 to draw surface water from the nearby Tissø Lake. This was the first step in a long series of collaborations.

In 1972, plasterboard manufacturer Gyproc joined the industrial park, and Statoil began piping gas to Gyproc’s plasterboard drying ovens, ending the longstanding practice of flaring waste gas into the atmosphere. By 1993, the Asnæs coal-fired power plant had installed a sulphur dioxide scrubber that produced calcium sulphate (also known as gypsum) as a byproduct. With this scrubber, they were able to meet two-thirds of Gyproc’s needs for gypsum, a key ingredient in plasterboard.

Today, almost 30 exchanges can be counted between Kalundborg’s tenants, from steam and process water to biomass and lignin. Current estimates put resource savings at 200,000 tonnes per year of natural gypsum, and two billion litres per year of groundwater, among other savings.

This is in contrast with other ways that industrial symbiosis may develop, which include a top-down model, where governments mandate the construction of certain facilities and the exchange of byproducts, or a facilitated approach, where a third party helps incorporate existing businesses into a symbiotic network.

The beginnings of industrial ecology

Frosch and Gallopoulos proposed a model called the industrial ecosystem, where industrial activity could be integrated in a way that would reduce industrial waste and stave off resource depletion. “In such a system, the consumption of energy and materials is optimized, waste generation is minimized and the effluents of one process … serve as the raw material for the other,” they wrote.

This article was the spark for a wildfire of academic inquiry. By 1995, Thomas Graedel and Braden Allenby had published Industrial Ecology, the first textbook on the subject. Industrial ecology, they wrote, “requires that an industrial system be viewed not in isolation from its surrounding systems, but in concert with them.” This “systems view” of industry gave rise to the proliferation of numerous subfields within industrial ecology, including industrial symbiosis.

The academic study of industrial symbiosis has flourished through the past two decades – but it’s not necessarily an entirely new concept to industries.

“I think that what we’ve seen so far, the business community has gone about this in their own way for decades,” says Marian Chertow, professor of industrial environmental management at Yale University and former president of the International Society for Industrial Ecology. “It’s a practical efficiency and profit-driven activity.”

Whether companies are calling it industrial symbiosis or not, barriers remain to attracting industries that still operate on a linear production model. In an economic climate where success is measured purely in short-term profits, it can be difficult to encourage adoption of a model that brings longer-term economic, environmental and social benefits.

“It could be a five, 10-year process until you get to where you want,” says Vered Blass, head of the Innovations in Industrial Ecology Lab at Tel Aviv University. “There is no magic solution. You would not be able to start a symbiosis from today to tomorrow.”

“One of the biggest market failures, which is not often talked about, is time poverty,” he says. “Small and medium-sized enterprises (SMEs) and micros just do not have the time to invest in these possibilities. It’s not particularly on their agenda, and they don’t have the expertise, or the resources, typically, to steer this type of thing,”

A new model of symbiosis

Laybourn advocates for the facilitated model of symbiosis, where an outside party helps existing companies find opportunities for byproduct re-use, sharing of infrastructure and communal provision of services.

His company, International Synergies, spearheaded the development of the National Industrial Symbiosis Program (NISP) in the U.K. that ran from 2005 to 2013. The innovation that NISP provided was “rather than have a very small network of very big companies, why not have a huge network that had no barriers to entry – so you could bring in SMEs, micros and all types of industry,” says Laybourn.

The U.K. government provided the investment and resources to bring the network of enterprises to a national level. And the investment paid off: According to a recent study from Manchester Economics, the direct return was 9 pounds in tax benefits for every pound invested by the government. 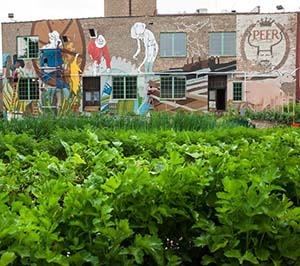 A similar program is now in the works for Canada. Proposals to run pilots in Alberta and British Columbia for the NISP-Canada program are currently being reviewed by the federal Green Municipal Fund and Western Economic Diversification.

Weslynne Ashton, assistant professor of environmental management and sustainability at the Illinois Institute of Technology, also points to The Plant as an innovative new way that symbiosis is taking shape. Founded in 2010, it is a renovated former meat-packing plant in Chicago’s South Side that is home to various food businesses, from aquaponics to saffron processing. At the heart of the operation is an anaerobic digester, which powers the plant with on- and off-site organic waste. This means the plant is not only carbon neutral, it’s actually acting as a local carbon sink.

Tenants within The Plant are connected by byproduct exchanges, whether it’s Whiner Beer Company sending spent grains from beer fermentation to Fruiting Mushrooms, where they are used as compost for mushroom growth, or Four Letter Word Coffee sending coffee chaff to Plant Chicago, where it is used as fertilizer for vegetables.

“It’s become this sort of incubator for the circular economy, for symbiosis, but also for economic development in this part of the city that hasn’t had a lot of external investment,” says Ashton. “It’s industrial symbiosis in action, but in a very organic way.”