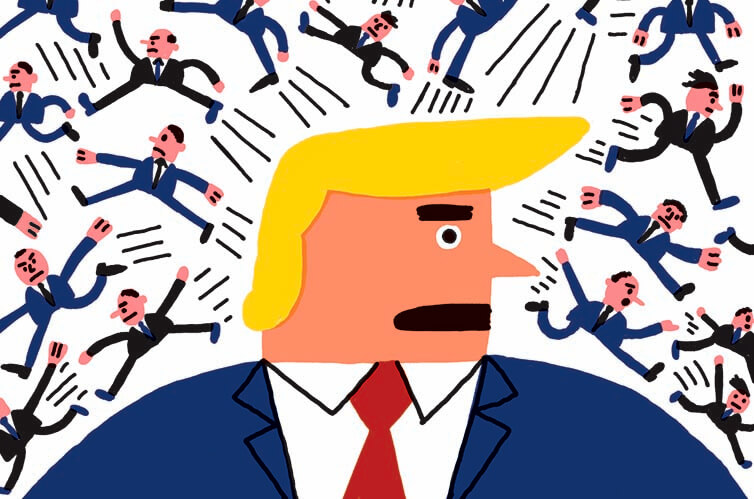 Kenneth Frazier may have ushered in a new era of boldness in U.S. business leaders’ approach to divisive social and political issues. On August 14, Frazier, a janitor’s son who now heads Merck, the New Jersey-based pharmaceuticals giant, became the first CEO to walk away from President Donald Trump’s business advisory council in protest against the president’s inflammatory reaction to a rally of swastika-waving white supremacists in Charlottesville, Virginia, the previous weekend.

Just a few months earlier, the two men had been photographed laughing together at a White House meeting to celebrate the 28-member advisory group, known as the Strategic and Policy Forum. Trump set up the body last December to aid his drive for more American jobs. But his refusal to directly condemn the neo-Nazis in Charlottesville triggered a reaction seldom seen in U.S. boardrooms.

“America’s leaders must honor our fundamental values by clearly rejecting expressions of hatred, bigotry and group supremacy, which run counter to the American ideal that all people are created equal,” Frazier said in his resignation announcement.

Frazier’s response to Trump drew a vigorous endorsement from fellow members of the advisory council. Within a day of his announcement, several had also quit the council, including 3M CEO Inge Thulin, Campbell Soup CEO Denise Morrison and Richard Trumka, president of the AFL-CIO union federation.

Two others, Disney chairman Robert Iger and Tesla founder Elon Musk, had resigned in May after Trump’s decision to pull the U.S. out of the Paris climate change accord.

Trump initially put on a show of defiance, tweeting that “for every CEO that drops out of the manufacturing council, I have many to take their place. Grandstanders should not have gone on.”  But he changed his tune as others followed Frazier’s lead. Just 48 hours after Frazier’s resignation, the president announced: “Rather than putting pressure on the businesspeople of the Manufacturing Council & Strategy & Policy Forum, I am ending both. Thank you all!”

Frazier had clearly made his point, not only to Trump but to many business leaders who may now feel a little less restrained about taking a stand.

One of South Africa’s brightest lights in the aftermath of apartheid was the state-owned power monopoly, Eskom. Led by a team of skilled engineers, the utility sprang into action to bring electricity to millions of homes, especially in impoverished rural areas. By 2000, more than four in five South Africans had electricity to heat and light their homes, up from 57 per cent a decade earlier, according to the World Bank.

Eskom remains Africa’s largest producer of electricity, but its reputation is now in tatters. On the operations side, poor management and under-investment in new generating capacity have caused widespread brownouts, which Eskom euphemistically describes as “load shedding.” Most recently, it has been rocked by a series of scandals to the point where parliament is now investigating its governance practices.

Among the irregularities being probed are a massive pension payout to a disgraced former chief executive who was then rehired; the appointment and remuneration of board members; and evidence of corruption in coal and other supply contracts.

The concerns go well beyond the recent scandals. The South African Institute of Race Relations, a research group, noted in a 2015 report that after the ruling African National Congress took power in 1994 “to Eskom’s previous single brief – providing sufficient electricity – were added various political and ideological objectives….”

At the centre of the latest allegations are ties between some board members and senior managers, and the Indian-born Gupta family, whose shadowy business empire has gained such sway over President Jacob Zuma that critics accuse it of “state capture.”

The Organization Undoing Tax Abuse (OUTA), a non-profit, laid corruption charges in August against Eskom’s chief financial officer Anoj Singh, and against Mark Pamensky, a former Eskom director who also served on the boards of several Gupta-owned businesses. Based on an independent report by a Johannesburg lawyer, OUTA said that Singh had authorized various payments by Eskom to benefit Gupta businesses, in return for travel and other favours.

The Development Bank of Southern Africa threatened to call in a 15 billion rand (C$1.44 billion) loan earlier this year if Eskom did not remove Singh. He was suspended in July pending an investigation. Furthermore, the auditor-general has raised numerous questions about Eskom’s latest annual financial statements, including 3 billion rand in unauthorized spending.