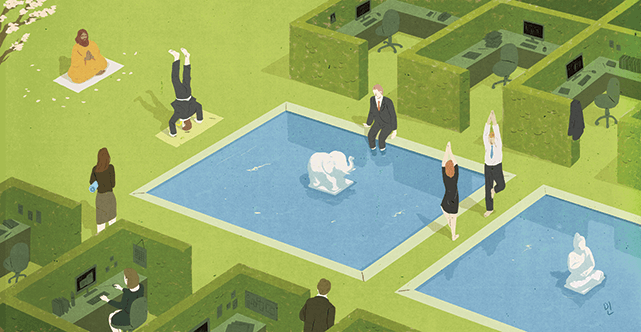 SAN FRANCISCO – Executives from Google, Facebook and Instagram are all taking turns on a hotel conference room stage sharing business insights with an audience of 2,000. They’re not, as you might expect, clicking through slide shows about user growth or retention rates. Instead, they’re swapping pre-meeting meditation techniques, pausing to “get present” and laying out the benefits of a compassionate workspace.

This is Wisdom 2.0, a conference where meditation gurus and technology leaders converse about living mindfully in the modern world.

At the fifth annual San Francisco symposium, held in mid-February, there’s a lot of onstage and offstage grappling with the disconnecting impacts of our hyper-connectivity. Projected onto large screens are charts on what cellphone addiction is doing to young brains. As an antidote, there are plenty of zoned areas where attendees are invited to “disconnect to reconnect,” including a meditation temple and makeshift yoga studio. There’s even a wood-clad “Camp Grounded” booth where adults can sign up for a digital detox retreat free of devices and work talk. Yes, this is California, long considered the flakiest American state, but media mogul and mindful living advocate Arianna Huffington, founder of Huffington Post, takes the stage to assure the audience that mindful meditation is now mainstream.

She labels 2013 as “the year when CEOs came out not as being gay but as being meditators.” On her list of those out and proud zen leaders: Ray Dalio, founder of Bridgewater, the world’s largest hedge fund company; Marc Benioff, CEO of Salesforce.com, a billion-dollar cloud-based customer management company; and Mark Bertolini, CEO of Aetna, America’s third largest health insurance company. Aetna, by the way, rolled out a trademarked Mindfulness at Work program to its 49,000 employees after having conducted pilot studies demonstrating its stress-reducing, productivity-amping impacts.

The European telecom marketer sitting next to me leans in and confides he’d never really heard of mindfulness before but grew curious when a company as successful as Google was doing it.

So what exactly is the rumoured key to all this corporate success? Mindfulness, at its core, is pretty simple. It’s the practice of bringing a calm, non-judgmental awareness to the present moment. It can be as basic as taking a minute to get quiet and tune into your breath and senses. If there’s an aim to mindfulness it is to carry that tranquil “clear seeing” into your day, every day. (Google, we’re told, does two-minute mindful meditations at the top of every meeting.)

Mindfulness has its roots in Buddhism, though secular mindful meditation techniques recently hit the cover of Time magazine thanks to their rising use as stress reduction tools in North American hospitals, classrooms, veterans bureaus, therapist offices, congressional offices and, yes, boardrooms. Time called it “The Mindful Revolution.”

There’s no doubt it’s permeated business culture. Mindful meditation even made its way into the World Economic Forum in Davos, Switzerland, this past January, with sessions on mindful leadership running parallel to talks on monetary policy, food security and an Iranian nuclear accord.

The question hanging in the air is whether these wisdom practices, as mindfulness and meditation are known, are, at the same time, sparking a more mindful approach all the way down the supply chain, spawning cleaner, more compassionate capitalism.

At Wisdom 2.0, a yoga teacher from Seattle approaches a Google exec at the end of a breakout session on Yoga in the Digital Age and asks just that. Where does the triple bottom line (people, planet and profit) fit into all this mindfulness? It’s a good question. No one other than Arianna Huffington really mentioned environmental issues on the main stage this year. Over a boxed lunch around a conference table that day, a small group of attendees get to chatting about the lack of broader discussion around corporate ethics and environmental responsibility. There’s only one corporate responsibility talk at the four-day Wisdom conference and that’s dedicated to petition website Change.org, so it’s unclear from the event whether corporate social responsibility practices and wisdom practices are intersecting let alone feeding each other.

I track down the godfather of mindfulness-based stress reduction (MBSR) techniques, Jon Kabat-Zinn, who is emphatic that mindfulness and sustainability are inherently interwoven. But is this actually playing out within the meditating business class? He points me to the very woman who taught the Mindful Leaders session in Davos this winter for her take on the issue. Janice Marturano left her 15-year post as vice-president of public responsibility at General Mills to start the Institute for Mindful Leadership after training under Kabat-Zinn. The institute now counts among its clients Intel, Target and Procter & Gamble, along with non-corporate clients like the U.S. Army and American Red Cross.

So are mindful leaders better corporate citizens? Marturano, author of Finding the Space to Lead, says those who’ve gone through the program are trained to cultivate focus, clarity, creativity and, key here, compassion, all in the service of others. They’re primed to take purposeful pauses, connect to their principles and ethics, and understand the ripple effects of each decision. So yes, she adds, “They want to find solutions that are good for the organization, the employees and the community – they want to find the win-win-win.” Case in point? Marturano points to General Mills, her former employer and client. The food giant has a publicly stated goal of being one of the most socially responsible food companies. It donates $3 million a week to charitable causes, diverts 84 per cent of its solid waste and has placed 10 priority ingredients on the path to improved sustainability.

Not that self-professed mindful leaders or companies are without critics. Google’s morning session on 3 Steps to Build Corporate Mindfulness the Google Way is interrupted by protesters unravelling an “Eviction-free San Francisco” banner before they’re ushered out of the room. The tech sector’s recent boom and San Francisco’s subsequent housing squeeze have made Google and its private shuttle buses the target of local poverty, labour and anti-gentrification activists.

“There are no perfect companies,” says Raj Sisodia, who co-authored Conscious Capitalism: Liberating the Heroic Spirit of Business with Whole Foods CEO John Mackey. But mindful leaders can elevate their company to what Sisodia calls a conscious business when they tap into four basic principles: higher purpose beyond profit, stakeholder orientation (recognizing that there is no business without a life-sustaining ecosystem), conscious culture among team members and, finally, conscious leadership.

To foster that conscious leadership, Sisodia starts every Conscious Capitalism class he teaches at Massachusetts’ Babson College with meditation along with exercises around mindfulness, introspection, self-knowledge, emotional intelligence, spiritual intelligence, cultivating gratitude and appreciation. He cites controlled randomized trials demonstrating that meditation is actually the most effective way to increase socially responsible behaviour within your management team.

A study published in the Journal of Corporate Citizenship in 2010 looked at managers at four European companies from three sectors (pharmaceuticals, natural resources and information technology). Researchers tested the effectiveness of various management education approaches designed to spur socially responsible behaviour. Turns out that traditional training in corporate social responsibility (explaining the importance of integrating more social and environmental concerns into their business) failed to change participant decisions when they were faced with a CSR dilemma.

On the other hand, approaches that involved mental silence meditation and relaxation techniques led to significant improvements in social consciousness and socially responsible behaviour, even when CSR principles weren’t actually mentioned. The meditating managers were more apt to prioritize social welfare over economic profit and even more likely to prioritize protection of the natural environment over productivity. Plus, they had a greater overall sense of responsibility and inner harmony.

And so, adds Sisodia, even if companies take on mindful meditation for basic self-improvement reasons like stress reduction, greater motivators may flow from that.

“The consciousness part of conscious capitalism requires that we be more mindful and more awake and see the whole reality, all the interconnections and interdependencies… (Meditation) is one of the best ways that we know how to accomplish that, along with training in system thinking, understanding how things are interconnected and how you can have unintended consequences of action if things are connected.”

The message seems to be resonating with businesses. The official number of “firms of endearment” has grown from 28 to 72 in recent years and chapters have sprouted up in eight countries. And this April’s Conscious Capitalism conference in San Diego will welcome new CEOs curious about “building fully human organizations.”

Back at Wisdom 2.0, the room is surging with optimism. Kabat-Zinn says getting one person with enough influence in a corporation on board with mindful workplace techniques is certainly key to changing the culture and not just putting a Band-Aid on employee stress. But he’s hopeful. What we’re in the very beginning of, Kabat-Zinn says, is a renaissance that could “make the European Italian renaissance with Michelangelo and Botticelli look pale by comparison.” Assuming, he says, it flowers the way it has the potential to flower.

Ready? Now, take a deep a breath and get present.