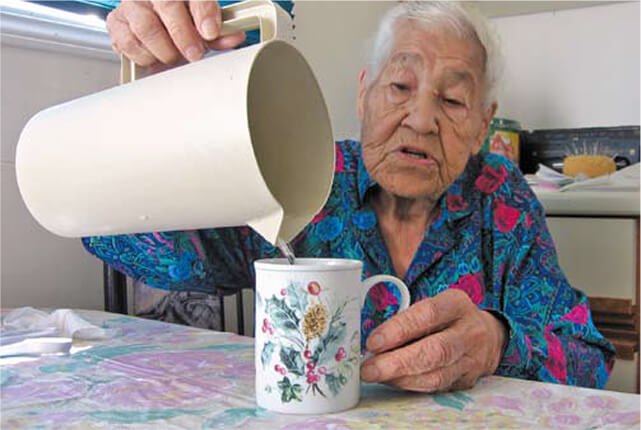 At the age of 86, Mary Rose Waquan has a steady hand as she pours filtered water into a colourful ceramic mug and takes a careful sip. The Mikisew Cree woman, born in the bush at the shores of the Athabasca River, is one of many residents of Fort Chipewyan, a settlement 280 kilometres downstream of Fort McMurray, Alberta.

Here the food used to come almost solely from the land. Mary Rose’s favourite is fish; her second favourite, moose. These days she won’t eat any meat from the area: “It’s no good anymore. Tastes bad since the factories were built upriver.” Her granddaughter concurs, showing how her grandma would push the plate away after one bite.

The tiny settlement was put on the environmental map when higher-than-normal cancer rates were reported in the community. Physician and local hero Dr. John O’Connor’s medical license was threatened after he spoke out about a particular form of cancer he observed in the community of 1,200 people. Typically affecting only one in 100,000, he had noticed five patients with bile-duct cancer, a type of cancer strongly linked to arsenic and polycyclic aromatic hydrocarbon, both byproducts of the upstream oil sands development.

O’Connor’s push for a public inquiry was thwarted by Alberta Health’s conclusion that the cancer scares were exaggerated. They proceeded to file complaints against O’Connor for professional misconduct for raising “undue alarm.” He has since been cleared of charges.

Alarmed by the escalating cancer rates, the three local First Nations who live in Fort Chipewyan decided to call a five-day ‘Keepers of the Water Conference’ in August 2008 so that people could come and see for themselves what is happening. Attended by 18 prominent Canadian and American NGOs, and government representatives from Alberta and the Northwest Territories, the gathering swiftly caught international attention as participants snapped photos of a two-mouthed fish caught in the river nearby.

Chief Alan Adam, the community’s 41-year-old chief from the Athabasca Chipewyan First Nation, spoke at the conference about his concerns over the water and environmental contamination, recognizing that an economic boom upstream “becomes an economic disaster to our way of life.” With the unprecedented expansion of Alberta’s oil sands, economies are booming but not without consequences. Every day the oil sands create 1.8 billion litres of waste deposits that are stored in tailings ponds covering approximately 130 square km of Alberta. Suncor Energy Inc., one of the lead oil sands developers, commissioned its own environmental assessment and found the level of arsenic in local moose meat to be 453 times the acceptable levels.

The people of Fort Chipewyan are not alone in their concern over the rapid growth of the oil sands. According to a poll conducted for Alberta-based Pembina Institute, 71 per cent of Albertans believe new oil sands approvals should be suspended until infrastructure and environmental issues have been addressed.

The people of Fort Chipewyan issued a declaration at the conference: “Our water is polluted and many of our animals are no longer abundant; they are sick and dying. Our youth are going to have a hard time in the future if we do not make dramatic changes today.”