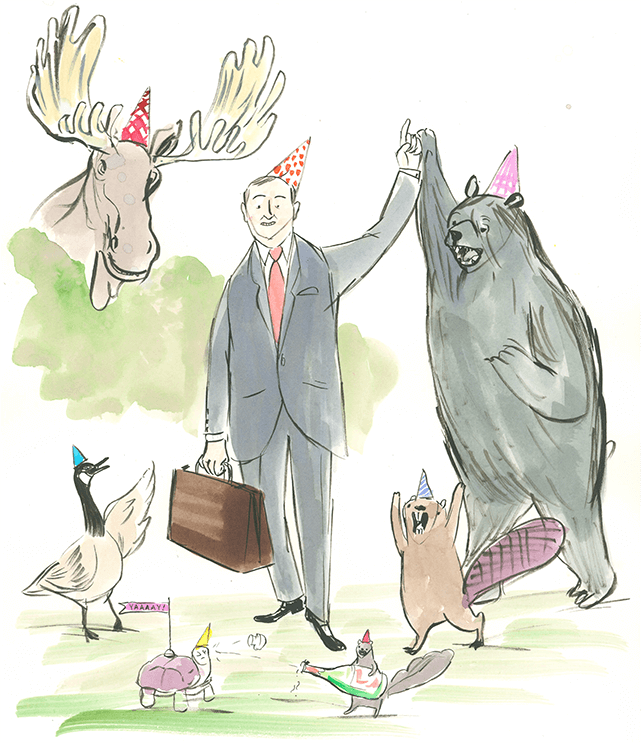 – Oystein Dahle, former VP of Exxon for Norway and the North Sea

Ten years ago, Corporate Knights ventured forth into the realm of corporate rankings—not the usual league of tables comparing revenues and profits, but the murkier space deep in the woods. This shaded area of corporate eco-social performance will answer civilization’s big question: Can we find a way to reconcile our capitalist system on this hot and crowded planet or does an age of Mad Max proportions await?

Some may ask: What does corporate citizenship have to do with the fate of humanity? Thirty years ago, states were more powerful than corporations, but no longer. In 1980, the market value of all publicly traded companies was one-quarter of global gross domestic product (GDP). Today, that ratio stands at eye level with global GDP at approximately US$60 trillion. What’s more, our largest corporations hold marionette strings extending into the heart of the democratic world’s super-structures; from 24 Sussex and the Beltway, to Whitehall and Elysée.

What companies do with social, ecological, natural and financial capital to thrive in the present and shape the future matters.

The nature of the quest has morphed along a continuum that started with corporate social responsibility, evolving to responsible business, and then to the cusp of clean capitalism—a daunting but more exciting age of opportunity that will reward companies that pursue profit concurrently with social and ecological prosperity.

Imagine a prediction 10 years ago that investors with trillions of dollars in combined investments would be holding companies’ feet to the fire to usher in a low-carbon economy (the $65-trillion Carbon Disclosure Project) and standing on guard for human rights and long-term societal value creation as an existential fiduciary notion (the $25 trillion committed under the United Nations Principles for Responsible Investment). Or that more money would be invested in renewable electricity ($243 billion in 2010) than coal, natural gas and oil power stations combined. Or that Proctor & Gamble, Nike and Johnson & Johnson would quit the U.S. Chamber of Commerce over its dinosaur position on climate change. The list of ideological accomplishments doesn’t stop there, and would have been written off as crackpot predictions a decade ago. Yet, as so often happens, yesterday’s dreams become today’s reality.

What can we do in the next 10 years to veer even further from the path of corporate and planetary bankruptcy and seize the opportunity of cashing in on the Promised Land of enlightened clean capitalism?

Capital market actors can innovate the transparent, low-cost, inclusive tools and products (like green and social impact bonds) to transform the trillions of dollars of dead money and rhetoric (less than two per cent of investors who hail the virtues of clean capitalism have made it part of their mainstream investment strategy) into investment reality. Yes, bond traders really can save the world if they update their valuation models to take stock of merging social and environmental realities.

Energy more than any other vector is where the rubber hits the clean capitalist road. With $243 billion of investment in renewable electricity generation in 2010, we are half-way to the average of $500 billion a year for the next 20 years the International Energy Agency says will be necessary to win the fight against dangerous climate change. Winning will require a smart electricity grid that maximizes our potential to generate and integrate clean energy wherever it lies —from the Sahara desert’s solar power, to the wind of Saudi Arabia, and the hydro pump storage in Canada’s great wilderness.

Many billion-dollar companies have already caught the scent of opportunity that lies in the clean capitalist economy. The next step is to refashion policy so it rewards those who lead the way on natural and social capital productivity. Get ready for business councils for clean capitalism, a parade of big businesses who take the policy bull by the horns to lead this change. This is already happening on single issues—such as with the International Emissions Trading Association, stocked with members like Shell and Rio Tinto, which recently beat environmental groups to the punch to help prevent a possible climb-down by the B.C. government from the highest rung of continental carbon pricing leadership.

Last, but certainly not least, the eco-social data revolution offers the chance to optimize natural and social capital productivity with the same meticulous vigour applied to financial productivity. But this is not a given. Focus can cut through the data obesity. Thanks to Bloomberg and Thomson Reuters’ provision of social and environmental corporate data and the 15 countries, including India, now working on implementing a green GDP, we are rapidly moving environmental and social data out of the statistical ghetto into the heart of the main documents that guide decision-making in our society: profit and loss statements, and GDP.

The prize of clean capitalism is the space race of the next decade. With Canada’s unparalleled combination of per-capita natural capital assets and stable pots of rock-solid big money institutions—and the 2011 Best 50 Corporate Citizens leading the way—we are uniquely poised to pioneer prosperous models that will enable us and our civilization to win this race against the clock. We have nothing to lose but our chains to a fairy tale whose time is up.