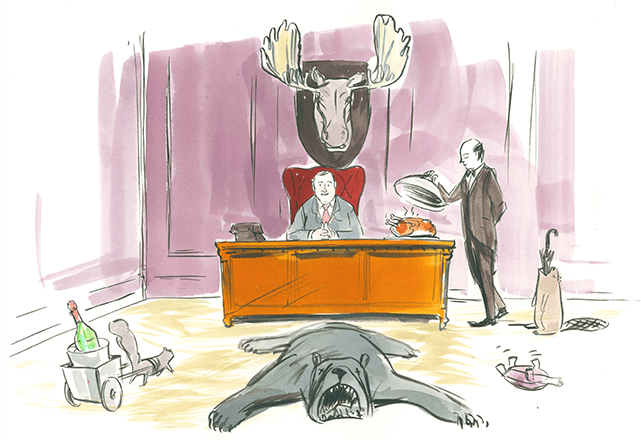 The world of business can be a happy household – just ask Aristotle.

The Greek philosopher defined business in two ways: chrematistics, which means the art of money-making, and oikonomia, the Greek root word of economics, meaning household stewardship or management.

A household is ultimately an enterprise—a group of citizens who choose to live and strive together for the purpose of optimizing their well-being and happiness. A business is simply a legal enterprise that is ultimately an extension of a household. By nature, I believe we are all economists who run an enterprise called a household for the purpose of pursuing happiness. Yet fundamentally, business has strayed from this principle.

In eight years of teaching business students at the University of Alberta about ethics, corporate responsibility and social entrepreneurship, I have often posed the question: what is the role of business in the 21st century? This year, the discussion led my students to a sobering conclusion: they were graduating as professional chrematists, being taught to pursue profit above all. And they weren’t happy about it.

The majority of Canadian and U.S. business schools continue to teach that the primary purpose of business is to make money or maximize profits for owners and shareholders. However, I believe this philosophy is problematic, particularly so when one looks closely at the statement of “best interests” in a business’s legal charter. In fact, there are no clear statements about what a business is responsible for.

The demand for greater corporate social responsibility (CSR) over the past 15 to 20 years has been driven by several factors, including the Enron and WorldCom scandals and the Madoff affair. CSR has taken the form of sustainability reports, triple-bottom-line accounting and the ongoing promotion of the new image of companies trying to do good. But some cynics, including many of my business students, believe these are merely token gestures, made mostly by larger companies, serving to mask the corporation’s true character.

Others have criticized CSR as a concept more fundamentally. The late economist Milton Friedman believed it to be downright immoral, as it is contrary to his perception of the corporation’s ultimate responsibility: maximizing profits. Friedman argued that because a corporation is the property of its stockholders, there is no “social responsibility” for corporate executives. In his view, executives must make as much money as possible for their shareholders, and those who choose social and environmental goals over profit are, in fact, acting immorally.

While there are undoubtedly conflicting beliefs about the purpose of business, no definitive statements are reflected in the law. Because of this, the role of a business becomes whatever its owners, directors and shareholders dictate it to be. It could certainly be said that a corporation is inherently devoid of values or principles to guide its behaviour; nothing explicitly exists against which we can hold its actions to account.

While more and more companies are voluntarily producing sustainability reports, corporate social or environmental responsibility is still not enshrined in their legal DNA. Presently, environmental and social accountability is discretionary and not legally binding.

But should we strive to redesign the corporate charters of business to incorporate environmental and social responsibility? Bryan Redd believes so. Redd is a corporate lawyer and CEO of Upstream 21, a Portland, Oregon-based corporation seeking to improve the financial, social and environmental performance of small companies.

“I would disagree that as a matter of law corporations are compelled to maximize shareholder value,” he says. “I am not aware of a single legal case in all of the U.S. states which I have studied in preparing the corporate charter for Upstream 21.”

Redd believes it was Wall Street’s short-term and somewhat irrational focus on quarterly performance results that led to the flawed decision-making by investors, corporate managers and directors and ultimately caused the recent economic downturn.

In response to this, Upstream 21 has set an important precedent by establishing a new kind of corporate charter. The charter clearly defines the responsibilities of a company to multiple stakeholders and imposes an accountability structure that considers the impacts of its business actions on all of its constituents.

The example of Upstream 21 suggests that there is an opportunity to optimize the genuine wealth or well-being of communities and the environment through clearly spelled out responsibilities.

In 2009, Harvard business students seized such an opportunity with a proposal for a declaration of a professional code of conduct for business professionals, similar to the Hippocratic Oath for doctors. Their proposed oath for business is: “to do no harm to the people and planet through their business operations” and ultimately be held to account for their actions as a licence to operate. They argued that a Hippocratic Oath for business would explicitly define management obligations towards society and the “diligent application of knowledge” through a specific set of norms. This is my vision of the future of business, which I see many new business students embracing: business and enterprise that is committed to financial sustainability, yet with a heart and passion for contributing to the overall health of the environment and the communities in which they operate.

Fortunately, more and more businesses are voluntarily moving in this direction, including Mountain Equipment Co-op, the Co-operators Group and Vancity Credit Union. Even corporate behemoths like Walmart are beginning to explore new ways of operating on the basis of financial, social and environmental sustainability principles. In Walmart’s case, it has recently released a sustainability scorecard measuring environmental performance in four key areas: greenhouse gas emissions, waste and water use, natural resources, and responsible and ethical production.

Yet what is particularly exciting is the emergence of new business alliances throughout Canada and the U.S. calling for a new corporate modus operandi. The Business Alliance for Local Living Economies (BALLE) is a network of local businesses working together to help create vibrant, resilient and flourishing local economies where environmental economic and social well-being is the ultimate objective. From Halifax to Vancouver, BALLE is helping to redefine business and competition.

I believe the future of business in the 21st century will belong to a new generation of business leaders who will reclaim the original definition of competition (to strive together) and establish a new set of virtues that will help contribute to neighbourhoods, cities and our natural environment. The desired out- come will be a corporate culture that cares— optimizing genuine returns to well-being and, ultimately, enduring happiness.