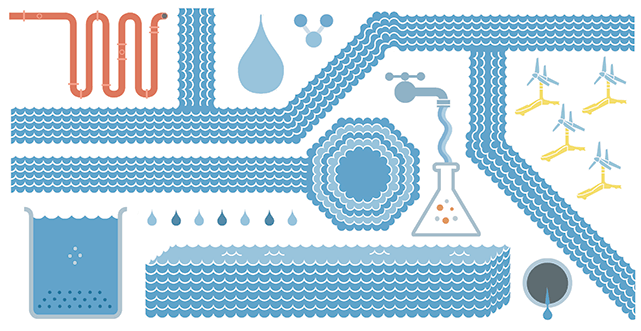 Few of those browsing the web know that Google was created by university scientists. In fact, the Internet search giant, with market capitalization of $193 billion and a newfound appetite or smartphones, was invented by two grad students and started life at Stanford University in California.

Across the world, universities are hotbeds of innovation. And in Canada, a growing amount of that Ivory Tower ingenuity involves a vital subject: water. Unfortunately, many of the great Canadian solutions to water issues stay locked away in labs, never making it to the market. That’s happening despite the fact that the need for marketable, environmentally friendly water inventions—a.k.a. the Blue Economy—is more pressing as climate patterns change, the population increases and people all over the world strive for a higher and more water-rich standard of living.

The result, say some of those charged with bringing lab-born brainwaves to market, is that Canada is spending as much as $6 billion a year to fund academic scientists, but their discoveries aren’t making life better, greener or bluer for Canadian citizens.

“There’s no shortage of discoveries,” says John Molloy, president and chief executive of PARTEQ Innovations, a Kingston, Ontario based company set up to take inventions from Queen’s University to market. But, unlike the United States, Canada still lacks the suite of models necessary to push academic inventions into the marketplace, Molloy says.

A report from the Conference Board of Canada in June ranking 17 developed countries on innovation placed Canada near the bottom of the heap—at 14th. The report said that while scientific output s strong and internationally respected, “Canada does not take the steps that other countries take to ensure science can be successfully commercialized and used as a source of advantage for innovative companies seeking global market share. Canadian companies are thus rarely at the leading edge of new technology and too often find themselves a generation or more behind the productivity growth achieved by global industry leaders.”

Not only that, but while the scientific research on water is ripe for commercialization and the need for innovation is clear, the path to the market is not straightforward, says Bernadette Conant, executive director of the Canadian Water Network in Waterloo, Ontario, which seeks to ensure that science shapes the water-management innovations that draw investments. Some of the advances that could help instead fall into a political vacuum.

“The needs are clear,” says Conant. “What we lack is a single or clear client-approval process.”

And, in a trend Molloy sees as dangerous, more and more universities are shying away from available market mechanisms in favour of waiting for industry to front the cash. “I’d like to see it go the other way,” he says. An early triumph for Molloy’s group is a process developed by Queen’s scientists Stephen

Brown and Peter Aston who figured out how to find E.coli and other disease-causing organisms in drinking water more quickly and reliably. They were galvanized by the Walkerton, Ontario, tragedy of May 2000 in which seven people died and thousands fell ill from the notorious bacteria.

PARTEQ, which has about a dozen industry sponsors who pay to sit at the table and help decide what gets developed, helped license the Pathogen Detection Systems technology. It was eventually sold to the French multinational corporation Veolia, and spun off into its offshoot, ENDETEC. The new system is now being launched internationally and PARTEQ and the scientist inventors stand to make royalties once the upfront development costs are paid back.

One of the key organizations set up to commercialize academic inventions from all over the country is GreenCentre Canada, also based in Kingston. Established in 2009 with $22 million from the federal and Ontario governments, it aims to match start-up investment money with clean, energy-efficient chemical processes—known as green chemistry. It does that both by buying licences to the technology and selling them to industry, and by creating new companies to house the innovations.

“The idea is to get it beyond: ‘Gee, isn’t it a great idea!’ ” says Rui Resendes, its executive director.

Resendes says in the two years since GreenCentre began, there’s been a spike in interest and investment around the world in Canadian inventions. “Water has become the new currency,” he says.

He points to an invention by Rob Singer, a professor of chemistry at the Maritimes Centre for Green Chemistry at Saint Mary’s University in Halifax, which is still at the laboratory stage but has immense potential for commercialization. GreenCentre has done a market assessment and wants to license

the invention with a consortium of industry partners. It involves ionic liquids, meaning salts that are liquid at or below room temperature. These have unique chemical properties, Singer says, because they stay liquid instead of easily becoming gas but they also bind to metals.

Conceptually, the ionic liquids could replace toxic solvents in hydrometallurgical metal refining, suck the valuable metals out of discarded electronics for resale and even clean up tailings ponds. Singer is still trying to figure out how toxic the ionic liquids are over time and is focusing research on making them both non-toxic and biodegradable.

Perhaps the most famous recent success story is an invention by Don Mavinic, a civil engineer at the University of British Columbia in Vancouver, who figured out how to mine phosphorus from liquid sewage. Phosphorus is a precious element, mined in only five places in the world and poised to run out in a century.

It is also crucial to feeding the global population because it stimulates plant growth, whether on land or in water. Left in wastewater, it can run into coastal waters and cause destructive algae blooms and low-oxygen zones as phytoplankton convert it to food.

Mavinic figured out how to cause a chemical reaction in liquid sewage to extract most of the phosphorus and turn it into environmentally friendly, slow-release fertilizer. The process is patented, licensed and managed out of the Vancouver company, Ostara NutrientRecovery Technologies. It’s in use at Edmonton’s Gold Bar wastewater treatment plant, in Portland, Oregon, and in Virginia and Pennsylvania, and is being tested in Europe. The fertilizer is used in horticulture and on turf, marketed as CrystalGreen.

“We see ourselves as a fertilizer company,” says Ahren Britton, Ostara’s chief technology officer, who helped develop the idea as a grad student of Mavinic’s in 2000. “We just happen to mine from wastewater instead of the ground.”

Britton says the company reckons there are 200 to 300 plants in North America that could use the system to treat sewage and as many in Europe. China and Southeast Asia are also prospects. Ostara believes it will eventually mine as much as one million tonnes of fertilizer a year, reducing the amount needed to be taken out of the ground. Ostara, which has grown to 35 staff from just three in 2006, has won awards as a clean technology pioneer and was invited to the World Economic Forum in Davos, Switzerland, his year.

The innovations aren’t only chemical, though; nor do they relate only to water quality. One of the globally significant water inventions under development in Canada is a project to harness tidal power in the Bay of Fundy. It’s a collaboration among academic and government scientists and industry, including Nova Scotia-based companies Nova Scotia Power, Minas Basin Pulp and Power, and Fundy Tidal; French company Alstom and U.K. company Atlantis Resources. The Bay is considered the prime site in the world for tidal speed and height, and the tidal power would replace some of the coal-fired electricity Nova Scotia uses now. It’s one of just two massive commercial tidal power turbines being developed in the world, along with another in the Orkneys in Scotland.

A test turbine the size of a house went into the Bay’s Minas Basin in November 2009 and came out 13 months later, likely failing in the first few weeks because of the ferocious flow, says Anna Redden, a biologist with the newly launched Acadia Tidal Energy Institute and director of the Fundy Ocean Research Centre for Energy.

Now, four sets of cables are going down in the Bay so that energy from four new test devices can feed straight to transmission lines next year. Redden says there are still unknowns about the direct effects on the environment and wildlife, but she’s helping design tests to figure that out. And although tidal power has gone in and out of vogue every few decades, Redden is sure it’s here to stay now.

“I think we’ve come to the point where it’s never going away,” she says. “We have to harvest tidal energy.”

While Redden and dozens of other academic scientists continue to piece together the complex puzzle of how to help society benefit from their water research, Conant of the Canadian Water Network has some provocative ideas about what the future will hold. Because water is integral to life and a shared commons, she posts that within a decade, patents and licences on water inventions may be passé. Instead, the new trend may be to break open the market, making patents openly accessible in the hopes that innovation will accelerate, and the Ivory Tower will be an even nimbler and more powerful driver of the Blue Economy.