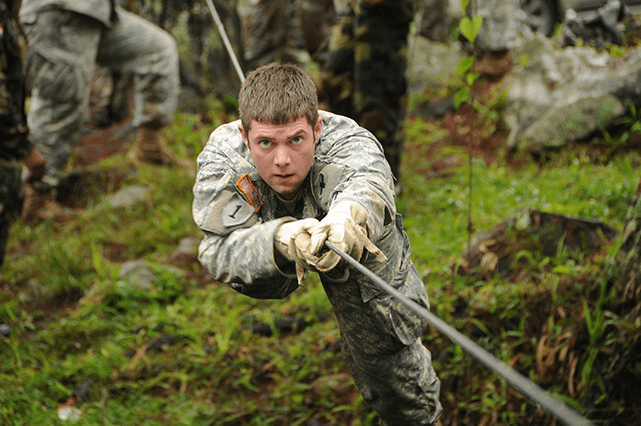 Photo courtesy of the U.S. Department of Defense.

During a speech in Maryland last year, Secretary of the Navy Ray Mabus looked back on the energy transitions that American naval forces have undergone over the past 150 years. Modernization required leaving the sail behind and building metal ships powered first by coal, then oil. The objections were fierce, with officers convinced the steel ships wouldn’t float and Navy leaders reluctant to jettison wind-propelled ships for an unproven technology. Mabus sees similar objections forming today, as the Navy moves away from fossil-fuel dependency. “The naysayers who say it’s too expensive, that the technology is just not there – they are going to be proven wrong again,” he said.

According to Sohbet Karbuz, a military energy analyst and former International Energy Agency official, there are multiple factors pushing the Department of Defense (DoD) to go green, including “increasing fuel costs, logistics pains and the delicate fuel distribution network.” The DoD is the largest consumer of liquid fuels on the planet, burning about 375,000 barrels a day to fuel over 500,000 vehicles, ships and aircraft. “Energy security concerns also exist, due to the heavy reliance on imported fossil fuels,” added Karbuz. “Then there’s the fragile domestic energy grid which powers the hundreds of domestic military facilities in the United States.”

Oil intensity per war fighter has risen 2.6 per cent a year for the past 40 years. Cheap oil and infrequent supply disruptions lulled the military into complacency for decades. It is the experience in Afghanistan and Iraq that sparked an overhaul of the DoD’s approach to energy issues. More than 3,000 American soldiers and contractors have been killed in attacks involving fuel convoys over the past 10 years. P.W. Singer, a senior fellow and expert in 21st century warfare at the Brookings Institution, laments the army losses. “A mere 1 per cent improvement in defense energy efficiency would have meant 6,444 fewer convoy missions, one of the most dangerous roles in the Iraq and Afghanistan conflicts.”

In 2007, the Pentagon began to look at military energy reform in a more systemic manner. Until then, the value of fuel was measured by its wholesale price at the point of acquisition, neglecting the supply chain needed to deliver it to the destination. A policy change began to measure the fully burdened cost of fuel (FBCF, in dollars per gallon). In 2009 the National Defense Authorization Act institutionalized FBCF and added a series of new energy Key Performance Parameters. This altered the military acquisition process, changed the emphasis of research and uncovered the potential of alternative energy sources.

Military leadership has been central to this transition. David Petraeus, then U.S. commander in Afghanistan, wrote to troops last year citing how “high fuel use imposes risks to the mission and to each of us” and insisting “we can and will do better.” The creation of an office for Operational Energy Plans and Programs has helped institutionalize these changes, with one of its first acts incorporating supply lines into Pentagon war games. The DoD also moved to cut its energy intensity 30 per cent and reduce petroleum use 20 per cent, both by 2015, and to obtain a quarter of its energy from renewable resources by 2020. And it’s creating personnel codes for energy specialties around efficiency and renewables, which never existed before.

The most substantial targets involve individual branches of DoD, in particular the Air Force and Navy, which consume the majority of armed forces fuel. The Air Force is calling for half its domestic aviation needs to be satisfied with biofuels by 2016 (see “Green Shades of Jet Fuel” below). The Navy’s plans are similar, targeting a 50-per-cent alternative energy mix by 2020 – along with the creation of a fossil-fuel independent “Green Strike Carrier Group” by 2016. Last summer, the Navy unveiled a partnership with the federal departments of Energy and Agriculture that will work with the private sector to strengthen domestic biofuel refining capacity. The three departments have pledged to invest up to $510 million over three years to support the initiative.

According to Todd Harrison, a defense budget studies expert at the Center for Strategic and Budgetary Assessments, aviation fuel represents nearly 73 per cent of DoD energy use. They’re working hard on getting planes to be much more efficient, he said. “At the same time they want the supply to not come from oil, so they’re working on biofuels that could be made in the U.S., or could be opportunistically derived from materials that they find in or near a theater of war.”

The biofuel purchases are not without critics. After a contentious Senate Armed Services Committee hearing with Mabus, Republican Senator John McCain decried the purchases as a waste of money, and is now threatening to strip the Navy of the ability to purchase biofuels in the next defense bill.

Amory Lovins, chairman of the Rocky Mountain Institute and a long-time military energy advisor, believes these comments show limited understanding of the issues at hand; in particular, the role of energy efficiency and secure supplies of military energy as a force protector, a force multiplier, and a long-term source of tens of billions in budgetary savings a year.

“The naval leadership, both civilian and uniformed, is united on this issue, for reasons of strategic operational and tactical necessity,” said Lovins. “It’s a purely military argument of combat effectiveness, and has nothing to do with anyone’s political ideology.”