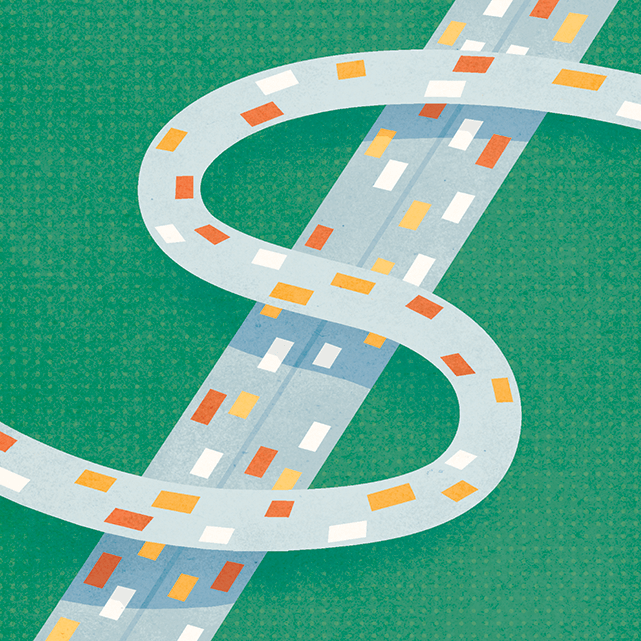 When Bern Grush co-founded the company Skymeter in 2002 he thought his GPS-based smart metering system for vehicles would be a big hit with municipalities and regional governments.

Road congestion is a chronic problem in big cities, getting worse, and already resulting in billions of dollars in lost productivity annually. The Texas A&M Transportation Institute estimated in 2009 it was costing the U.S. economy $87.2 billion a year, resulting in 2.8 billion gallons of fuel being unnecessarily burned.

At the same time, many municipalities are cash-strapped and looking for ways to fund road repairs and new transit infrastructure. Combine that with urban smog problems, not to mention the need to tackle greenhouse gas emissions, and the argument for taking action is difficult to deny. Offering a way to charge drivers based on the distance they drive, where they drive and the time they drive seemed for Grush like something cities didn’t just need, but should desperately want.

There was just one problem: Drivers are generally suspicious of such advanced road tolling schemes, particularly if it’s imposed. It’s a tax grab, they say with justification, because for the most part talk of road tolling in the U.S. has been about alternative ways of raising revenue, not helping the environment. Drivers also argue that it’s just another way for Big Brother to track citizens, and many object to what’s considered an added limit on free movement.

Fact is, said Grush, people like their privacy and freedom, and don’t like having to pony up for something they feel they already pay for. “If you want them to move off of that spot, they will resist,” he said. Few politicians are willing to pick that fight. Instead, they go back to talking about raising gas taxes. Still controversial, yes, but politically safer.

Having spent $9 million on marketing, going to conferences, doing demonstration projects, and trying to educate government officials and transportation economists, it finally sunk in for the wide-eyed folks at Skymeter. “We were dreamers,” conceded Grush, who was forced to throw in the towel last fall. The company, insolvent after spending years pursuing the dream, was shuttered and all assets were put on sale.

Few deny road-tolling works. One need only point to Stockholm, which in 2006 placed tolls at all access points into the city as part of an ambitious congestion-pricing system. Jonas Eliasson, director of the Centre for Transport Studies at Sweden’s Royal Institute of Technology, said during a presentation at a TEDx event last September that traffic volume during rush hour fell 20 per cent as soon as the charge, set at just €1 to €2, went into effect. “It’s now six and a half years ago since the congestion charge was introduced in Stockholm and we essentially have the same low traffic flows,” said Eliasson, adding that 70 per cent of Stockholm residents were against the toll when it was introduced. Today, 70 per cent want to keep it.

IBM, which was the main technology provider behind the Stockholm system – and similar systems in Singapore, London and Brisbane – believes it’s only a matter of time before GPS-based vehicle metering gains traction. This suggests that Skymeter may have simply been ahead of its time.

Eric-Mark Huitema, who leads IBM’s smarter transportation business in Europe, said a six-month trial in Eindhoven, Netherlands, two years ago showed that GPS-based road pricing not only met technical expectations, it was successful in getting 70 per cent of participants to avoid rush-hour driving. NXP Semiconductors, the telematics technology provider that partnered on the trial with IBM, said the project “vastly exceeded” expectations. “There is a direct relationship between the number of cars on the road and the price of the road,” Huitema said. IBM estimated that the system would reduce CO2 emissions from road transportation by at least 10 per cent if rolled out across the Netherlands.

The advantage of using GPS, versus a system of camera- and sensor-equipped gantries as in Stockholm, is that it doesn’t have to be confined to a particular area. Instead of charging a flat fee in exchange for access to a defined zone, drivers can be charged by the number of kilometres driven. More than that, it can be a variable charge based on the vehicle’s emissions profile, the time of day, specific locations and pollution levels. The flexibility means GPS-enhanced road tolling can be a municipal, regional, countrywide or even transnational system.

Germany has been charging trucks this way since 2005, the first in the world to do so using satellite tracking. More than 720,000 trucks, most originating from other European countries, are now equipped with onboard units used to charge the vehicles 18 to 36 cents per kilometre, depending on truck classification. The effect was almost immediate: The number of inefficient “dirty” trucks entering Germany has plummeted.

The network, operated by the company Toll Collect, stretches more than 13,000 kilometres and has generated about €30 billion so far for the German government. A different version of the system, called Toll2go, was launched in fall 2011 to cover trucks travelling through both Germany and Austria. “You’re seeing movement of this now to other countries,” said Huitema, adding that the next milestone is to apply the technology to personal vehicles. “But it starts with trucks.”

Commercial trucks are an easier sell. But at the consumer level, concerns over Big Brother, even in socialist Europe, remain a sticking point. The IBM Netherlands trial was supposed to lead to a nationwide tolling system for trucks and passenger vehicles starting in 2012. “But the program was suspended before it was implemented because of privacy concerns,” according to a December report on mileage-based vehicle fees from the U.S. Government Accountability Office (GAO), which was looking at ways to replace or supplement federal Highway Trust Fund revenues.

No major U.S. city has yet implemented a simple gantry system, let alone one that uses satellite tracking and charges based on mileage. Michael Bloomberg, mayor of New York City, proposed a Stockholm-style system in 2008 and it died a quick death. One can imagine the uproar of forcing car owners to install a device with the potential to track their every movement. “The perception that these technologies will be used to track privately owned vehicles and infringe upon individual privacy currently appears to be an insurmountable challenge,” according to the GAO report.

The systems can be designed to minimize the threat, perceived or real, to personal privacy. Programs can be run by an independent third party – we trust banks and credit-card companies, after all – and the information collected doesn’t have to track exactly where people go, just how far they’ve driven and what general class of road they have travelled on.

But even that is unlikely to earn the public’s trust if GPS-based road tolling programs are introduced as mandatory. That’s why most experts say the programs need to be voluntary from the start. As Facebook has shown, people have no problem opening up their lives when the decision is theirs alone. “The government would give you a choice,” explained Huitema. “You either pay a fixed tax, which is high, or a variable tax that requires installation of a small box in your car.” The idea is to set the variable rates such that drivers, if they altered their driving patterns, would voluntarily sign up in an effort to save money.

Bern Grush agrees the voluntary approach is the only way to go, but with one caveat: The offer must come from the private sector, not the government, and it needs to deliver what individual consumers value, not what citizens are expected to accept for the common good.

“You have to make it so people want to enroll in a program,” said Grush, who despite the failures of Skymeter is giving it another shot. Late last year he transferred the defunct company’s intellectual property to a new venture called Applied Telemetrics. “We do the same things with the technology, but our market emphasis has changed. We’re far more interested in insurance and premium parking applications, and not so much focusing on tolling.”

The emphasis on parking makes sense, given the frustration of trying to park in a downtown core – and the congestion that results. It’s not uncommon for drivers to circle a block several times, or “cruise,” as they look for cheap or free street parking. Donald Shoup, urban planning professor at University of California, Los Angeles, spent a year studying one Los Angeles neighbourhood and calculated that drivers cruising for on-street parking clocked 950,000 additional vehicle miles. Imagine what the figure is when applied to every neighbourhood in every major city on the globe.

Grush wants to ease that driver frustration (and city congestion) by offering a service called Park Wallet, a personal account pre-loaded with money or credit card information that would be linked to a network of registered parking lots in a city. “As you’re driving and come close to your destination you hit a button on your smart phone to indicate you’re looking for parking,” explained Grush, who owns a patent for GPS-based parking. “Up will come a list of available spots and prices. You choose one and park in it.”

The prices for spots would change throughout the day, based on demand and time of day, with an eye to maximizing revenues for lot owners. The city itself could join the network, making it possible to generate more income from street parking. Even homeowners could register a driveway left empty during the day. The end effect would be a dramatic reduction in cruising, which is directly related to congestion and emissions.

Users of the service, meanwhile, would benefit from the convenience of always finding a spot, never having to search for spare change, and not having to rush out early from an important meeting to put quarters in the street meter and avoid getting a ticket. That alone might be enough to motivate drivers to voluntarily put a tracking device in their car. But for Grush, it’s just the start – Park Wallet is only one of many “apps” that the device could enable, including insurance plans that charge for when, where and how far a person drives.

Pay-per-mile insurance is readily available in Europe, but has been slow to get going in North America. Quebec-based insurance provider Industrial Alliance offers a version of it, but geared to new drivers looking for savings. The company’s product, called Mobiliz, tracks kilometres driven and driving behaviour such as speed, abrupt braking and aggressive acceleration. “Just having the device in the cars changes behaviour,” said Michel Laurin, president and chief executive of Industrial Alliance Auto and Home Insurance. “Customers tells us they save on their insurance premium but also on gas.” California startup MetroMile offers pay-per-mile insurance for “low-mileage” drivers in Oregon, but different state insurance regulations have made it challenging to enter new jurisdictions.

But the potential is there, and if one box can provide what people want, that paves the way for the introduction of congestion tolling, said Grush. It begins to reframe people’s thinking about vehicle metering and larger societal benefits. “Once these meters are, say, in 52 per cent of vehicles, then the government can more easily step in and say, let’s start congestion charging. But first you have to create value for people.”