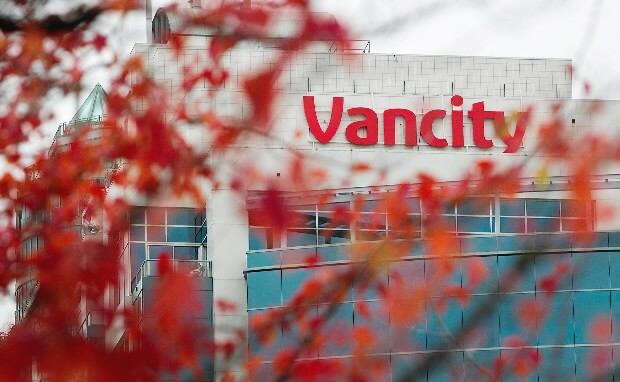 “Best Corporate Citizen in Canada” is about the last description that comes to mind for a financial institution in this era of “banksters,” the Occupy movement and temporary foreign workers on Bay Street.

Vancity – its full name is Vancouver City Savings Credit Union – has gained an enviable reputation for looking beyond the bottom line as it strives to “redefine wealth,” as its vision statement puts it.

“We are a different kind of financial institution,” chief executive Tamara Vrooman told Corporate Knights. (Full disclosure: Vancity is a minority investor in Corporate Knights. It played no role in compiling the Best 50 rankings.)

“We are a financial cooperative and we are owned by the people we serve,” says Vrooman. “So we are very much in tune with the needs and desires of our members and the communities in which they live.”

Vancity ranked especially high in narrowing the gap between the pay of senior executives and other employees; the strength of its pension fund; and the diversity of its board and senior management. Its weakest points were its relatively high water use and low tax rate, measured as a percentage of the past five years’ pre-tax earnings.

Vancity is dwarfed by the big Canadian shareholder-owned banks. Its assets of $17.1 billion amount to just 2 per cent of the balance sheet of Royal Bank of Canada, the country’s largest financial institution. It has fewer than 2,500 employees, and just 59 branches in Vancouver, provincial capital Victoria and British Columbia’s Fraser Valley.

Even so, the credit union has become an outspoken supporter of social and environmental causes. For example, it provided $2 million in loans to Emmanuel Pentecostal Church in New Westminster, whose activities include a daycare centre for 65 children. On a smaller scale, it financed the start-up of Fairy Cakes, a vegan cupcake bakery.

Financing low-income housing makes up a sizable part of its business. Vegetables grown in a rooftop garden at its head office are delivered to needy residents of Vancouver’s downtown Eastside.

“They’ve certainly carved out a brand and a reputation for being a reliable partner for growing neighbourhoods and the community,” said Greg D’Avignon, chief executive of the Business Council of British Columbia. Noting that the co-operative movement has deep roots in B.C., D’Avignon added that “there’s a broad respect for the work that Vancity does.”

Vancity has not shied away from taking sides on hot-button issues. Two mutual funds that it helps manage sold all their Enbridge shares last August in protest against the pipeline operator’s handling of a much-publicized oil spill in Michigan.

Vrooman said in a statement at the time that “Vancity Investment Management’s portfolio managers balance risk, return and the impact of all the investments that are made. They believe in engaging with companies to improve their environmental, social and governance performance; however, if companies no longer meet (these) criteria, they will divest the holdings from the portfolio.”

Vancity further burnished its social responsibility credentials two years ago by joining the Global Alliance for Banking on Values (GABV), a Netherlands-based group of 22 financial institutions which, in the alliance’s words, “have a shared commitment to find global solutions to international problems – and to promote a positive, viable alternative to the current financial system.”

James Niven, a GABV spokesman, said in an email that “we’re thorough when assessing who we invite to become members to make sure our network is only made up of values-based banks with a strong commitment to progressing this agenda.”

Vancity, Niven added, is “extremely active” in the alliance. Vrooman, who was B.C.’s deputy minister of finance from 2004 to 2007, sits on the GABV steering committee and jointly leads the alliance’s advocacy and engagement work. The group held its annual meeting in Vancouver last year.

Vrooman insisted that Vancity’s focus on social responsibility “not only builds better communities, but also builds a better bank.” She pointed to a study published last year by the GABV and the Rockefeller Foundation which showed that a group of 17 “sustainable” banks outperformed 29 traditional global heavyweights on almost every measure, including return on assets, growth in loans and deposits, and capital strength.

“It’s because we’re more directly connected to the people we serve,” Vrooman said. “We understand what the needs are. We don’t grow at a pace that the community can’t withstand or the planet can’t withstand. As a result, we have lower loan losses and better returns. We don’t make money by moving money around.”

Spurred by new legislation that clears the way for more federally-chartered credit unions, Vancity is now planning to expand its model to other parts of the country. “We get contacted all the time by not-for-profits, mission-based businesses, foundations who want to do business with us outside of British Columbia,” Vrooman said.

Asked about the challenges keeping her awake at night, Vrooman shrugged off the question. “Increasingly, young people in particular want to do business with an organization that isn’t just about short-term profits,” she replied. “One of the biggest challenges for us is, honestly, keeping up with the demand.”