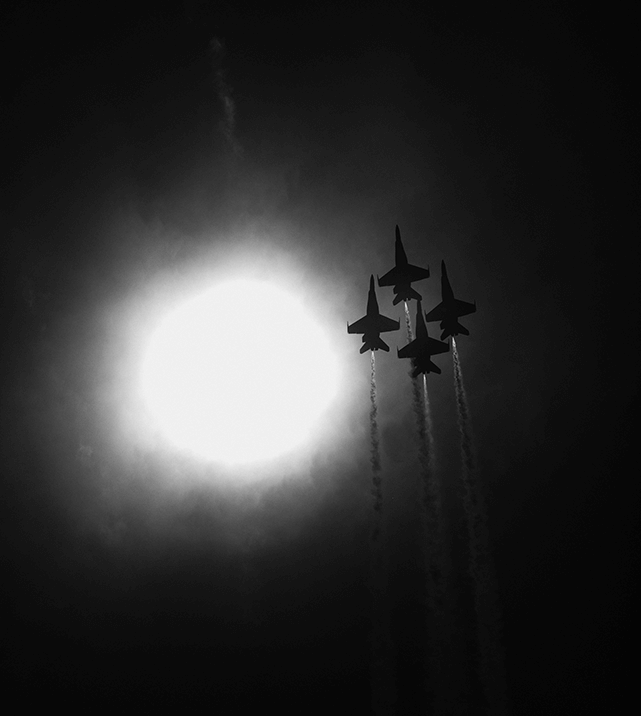 In June of last year, a research team working at the Department of National Defence (DND) put forth four different scenarios for the future. The most dire one envisioned a world besieged by environmental change and resource scarcity, where unstable markets and widespread resource conflict threatened Canada’s safety and sovereignty. If governments do not act in a proactive way to address such global trends this worst-case scenario is likely to become a reality, the report cautioned. But it also declared that by acting with some foresight, Canada could become “a global leader in both the alternative energy and environmental fields,” with the proliferation of defence-related science and technologies acting as one of the key drivers in this shift.

Canada’s armed forces have huge potential to reduce the country’s reliance on fossil fuels and, by association, its greenhouse gas emissions. As the federal department with the largest carbon footprint, and as its most significant energy consumer, the DND must adapt to maintain operational efficiency. Its over-reliance on oil and other high-carbon fuels occupies ever-larger portions of the military budget, causes fuel logistics pains and continues to negatively impact the environment.

This pressing need to adapt gives Canada’s military an opportunity to lead on innovation. It can help to create a domestic green energy market, promote the early marketability of alternative fuels and boost commercialization of clean technologies. But if the Canadian Forces are to play a catalytic role in a shift to a sustainable future, what steps are needed? How will Canada’s military adjust to this changing landscape? To what degree can it lead the change?

Militaries around the world, including the Canadian Forces, largely stood by throughout much of the past decade as sustainability gained momentum in government circles, business communities and civil society. Even the most environmentally-engaged political party, the federal New Democratic Party, was more interested in using Canada’s military to defend ecological assets than to change the military from within. As a result, when fuel prices began to rise in 2005, eventually peaking at $147.30 a barrel in July 2008, militaries were hit particularly hard. In one infamous incident, the Canadian navy was forced to cancel a scheduled patrol off the east coast due to navy budget constraints brought on by rising fuel costs. It helped expose a broader truth: that the Defence Department was not adequately prepared for a resource-constrained world.

Dr. Sohbet Karbuz, a military energy analyst and former International Energy Agency official, has observed different reactions from armed forces around the world. “Some militaries, like the French and the Portuguese, treated this issue as an inconvenience, and tried to find temporary solutions that didn’t address the problem. Others, including the Canadian military, quickly realized that this was a long-term problem, and took action.”

At least early on. Our military’s first order of business was to create in early 2008 a new office in charge of monitoring fuel utilization, called the Directorate of Fuels and Lubricants. The tracking of fuel use throughout the armed forces had never been a priority before, so the Canadian military had only a vague sense of its total fuel consumption. The directorate inventoried the fuel use and efficiency of different Canadian Forces assets.

Since then, however, “action” from the Canadian military has significantly lagged many of its global peers. The problem, Karbuz says, stems from paying “too much attention to installation energy (energy consumed in buildings and platforms) rather than operational energy (energy used to run tactical vehicles, especially aircraft and ground vehicles). Almost all operational energy involves oil. As mobility energy accounts for the majority of energy consumption in any modern military, reducing its use should be the priority.”

According to National Defence spokesperson Kara Carnduff, the most ambitious efforts over the past several years have been focused on integrating green building concepts into new DND infrastructure. Retrofitting existing facilities is another point of emphasis. Other efforts include Defence Research and Development Canada, the DND’s science and technology wing, which is “studying uses for alternative energies such as wind and solar power.”

Yet little is being done on the operational energy front. The British military, despite facing severe defence cuts, unveiled in 2010 an ambitious Sustainable Procurement Strategy. The minister of strategic acquisition, Lord Drayson, explained at the time that “reducing reliance on fossil fuels and other scarce resources will help the armed forces address the causes of climate change but will also improve their ability to operate in hostile environments, reducing the need for resupply convoys in dangerous territory.” Canada’s Green Procurement Policy, in contrast, is vague and limited in scope. One of its flagship initiatives is one instituted in 2007 – the limited five-per-cent biodiesel blend in some Canadian Forces vehicles.

The American military, as the single largest consumer of energy in the world (consuming over 375,000 barrels a day), has made reducing its reliance on fossil fuels a priority. Many factors are influencing this push, but the urgency of energy security and the lessons of the past decade spent in Afghanistan and Iraq, are two big ones. According to the U.S. Defense Department, one out of eight U.S. army casualties between 2003 and 2007 was a result of having to protect fuel convoys. As a consequence, procurement demands have been altered significantly, and ambitious fuel reduction plans have been instituted. Yet Canada, which experienced the same fuel supply chain and security issues in Afghanistan, is not incorporating the same lessons learned there into its military procurement process.

The Canada First Defence Strategy, designed to build up the Canadian Forces, allocates $490 billion over the next 20 years. It has led to many large procurement contracts being signed for everything from fighter jets to navy ships. Yet the life-cycle cost of these products has not been adequately weighed, says defence expert Stephen Staples, president of the Rideau Institute. “A military like Canada’s tends to hold onto assets longer. We will be operating this capital equipment for decades to come, so factoring in the future scarcity and cost of fuel is paramount to our acquisition process.”

Rick Whittaker, the chief technology officer at Sustainable Development Technology Canada (SDTC), a federally created foundation that funds cleantech development and demonstration, is still waiting for the procurement process to adopt a long-term perspective. “If (the Canadian Forces) take life-cycle costing into account, then that solves it,” he says. “As opposed to just looking at capital cost and in-service support, you need to look at life-cycle cost: total cost of ownership. If you take that viewpoint, new technologies can drive a truck right down the opportunity pathway.”

There’s no doubt that the American military, which spends $80 billion a year on defence research, is the big kid on the block. Canada, like many other NATO countries, buys large amounts of U.S. military equipment, meaning it can take advantage of innovations down south. For example, both Canada and the U.S. use the same transport aircraft, such as Lockheed Martin’s C-130Js Super Hercules and Boeing’s Globemaster III. Canada’s forces can capitalize on American research and development as a partner in joint research projects, such as tests of new synthetic fuel mixtures in different aircraft.

So is Canada destined to play second fiddle to the United States on defence research and development? Not necessarily, says Whittaker. About a year ago, the largest defence contractors in the world got together in Washington, D.C., to determine a path forward for the defence industry. They found that the most promising market adjacencies involved moving into alternate energy and the business of solving environmental problems.

“They came to a strong conclusion that Canada was the best location to start off this transition,” says Whittaker. For one, the Canada First Defence Strategy creates a strong market pull for defence contractors. Canada also is a hotbed for clean technology innovation. “We’re at technology-readiness level six to eight in military terms, which means development and demonstration just before commercialization.”

As well, Canada is an easy market to access and has a deep resource base, making it an attractive partner. “So this is the starting market for these contactors,” adds Whittaker. “All of these same large companies are working with about 25 per cent of our SDTC portfolio (of cleantech companies), so they’re absolutely serious about it. They’re putting their money where their mouth is, and they’re taking action.”

Whittaker emphasizes that the Canadian Forces won’t change for environmental reasons alone. “Clean energy, or greening defence, is not going to convince them. What’s going to drive them is operational effectiveness, cost efficiency on a life-cycle basis, and safety.”

But if that business case is there, why aren’t they moving faster?