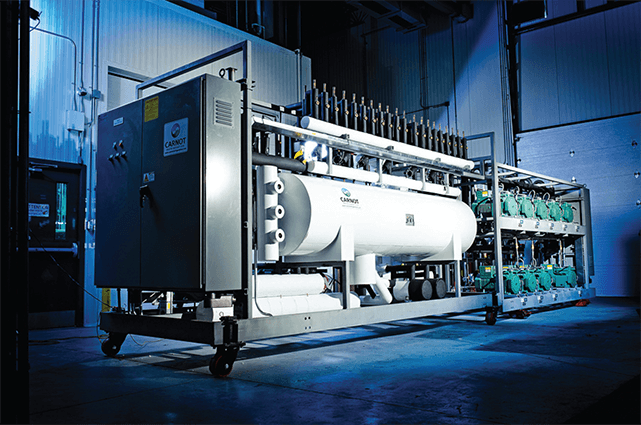 Supermarkets are major-league energy hogs. Besides the obvious need for lighting, huge areas need to be heated and cooled for customer comfort and perishable food needs to be kept cold or frozen.

It’s that last function – chilling or freezing food – that also makes supermarkets major contributors to global warming due to their reliance on nasty hydrochlorofluorocarbon (HCFC) or fluorohydrocarbon (HFC) refrigerants.

That could soon change. Over the past three years, Sobeys Québec has pioneered the use of a more environmentally friendly, made-in-Canada solution that relies on carbon dioxide (CO2) as the primary refrigerant rather than HCFCs or HFCs.

The push to replace the harmful refrigerants came from Simon Bérubé, Sobeys’ senior director of engineering, who challenged the company’s suppliers to design an HCFC/HFC-free system for its planned new store rollout. “One of the problems in the supermarket industry is the leak of refrigerant,” which is both expensive to replace and acts as a global warming super gas, Bérubé explained.

A standard-size supermarket refrigeration system uses 1,000 to 2,000 kilograms of synthetic HCFC/HFC refrigerants, and leaks are common with hundreds of joints in the piping that carries the refrigerant to various display counters. It is estimated that 20 to 30 per cent of the gas leaks out of systems annually.

Sobeys said the CO2-based system allows it to reduce the environmental footprint of its supermarkets by at least 50 per cent, compared with that of a conventional store. The first system was installed in the company’s Saint-Félix-de-Valois store in Québec in 2009. At last count, 32 of its supermarkets now use CO2-based refrigeration.

The CO2 solution Sobeys selected is actually an upgraded blast (of cold air) from the past. CO2-based refrigeration was standard a century ago and only displaced with the emergence of synthetic refrigerants. The advantages that Sobeys is reaping from its new CO2 plants make one wonder why industry ever abandoned the technology. “It’s a simpler system, a smaller system, it’s cheaper to operate, and with no HFCs inside the system there is [relatively] no pollution when there is a leak,” said Bérubé.

Sobeys’ CO2 system supplier, Trois-Rivières, Québec.-based Carnot Refrigeration, claims that CO2 is “a natural, safe (non-toxic) and inexpensive refrigerant” with 1/1,500 to 1/4,000 the potency – and therefore the climate impact – of synthetic refrigerants. The companies calculate the impact another way: a leak of 10 kilograms of HFC refrigerant R-507 generates 33,000 kilograms of CO2-equivalent emissions, while the same volume of carbon dioxide refrigerant leak will generate 10 kilograms of CO2 emissions.

With better heat-transfer properties than synthetic refrigerants, CO2 systems potentially require less energy to run and, because they operate at higher pressures, take up less space in the store. Sobeys is also reclaiming waste heat from the system to heat water and store areas, further reducing energy costs.

The Canadian-designed and built system not only offers Sobeys a lower-maintenance refrigeration system, but much of that maintenance can be conducted remotely. “Service calls can be achieved by our home office because it is all electronic,” said Marc-André Lesmerises, a co-founder of Carnot Refrigeration. “You don’t need to have someone in place to open the cases and take a screwdriver and modify something.”

These benefits convinced Sobeys, which under a variety of brands already operates 1,300 stores across 10 provinces, to deploy CO2 refrigeration plants in all new stores to be built in Canada. “We are also doing retrofit projects,” said Bérubé, explaining that the smaller size of the systems allows them to be installed inside existing mechanical rooms.

It’s a big exercise in change management, but it also places the company at the forefront of an industry trend. Lesmerises said he’s confident that CO2-based refrigeration systems are the future, pointing out that other supermarket chains are beginning to embrace the approach.

And because the synthetic refrigerants are ozone-depleting gases, switching to CO2 technology also helps companies comply with mandatory phase-outs under the Montreal Protocol.