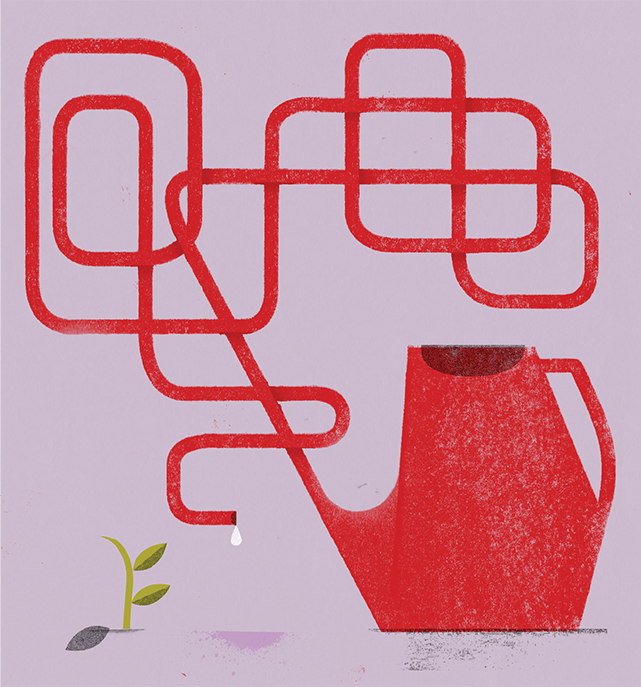 I was organizing Wall Street protests back in 2004, before it was cool. These days, I prefer to spend my time with cabinet ministers, bond market regulators and institutional investors trying to remove financial and regulatory barriers to the multi-trillion dollar green economy.

Nothing about my priorities has changed. I still want an economy that is sustainable and just, but I have since internalized Einstein’s wisdom: insanity is doing the same thing over and over again and expecting different results.

That’s why I was a bit ticked last month at the eco-triumphalism surrounding President Barack Obama’s decision to deny the application for the construction of the Keystone XL pipeline, following a concerted campaign that included 12,000 protesters forming a human chain around the White House.

I recognize that temporarily delaying this highway for oil sands was the culmination of a great deal of hard work and campaigning by dozens of North America’s top environmental groups. Also, that it holds symbolic value for a movement that has been handed some savage defeats since the collapse of the Copenhagen climate talks.

But the math is really depressing, and the euphoria over such a small and likely Pyrrhic victory hurts more – it gets to the root of the increasing irrelevance of an eco-movement bent on tearing down small parts of the problem rather than building up big parts of the solution.

Even if we killed the oil sands, it would wipe out just 50 to 100 million tonnes of greenhouse gases per year at their projected height. No small beans, but with two billion tonnes of carbon pollution coming out of North American coal-fired power plants every year, it wouldn`t be even close to good enough.

So why are environmental groups – with the exception of the David Suzuki Foundation’s Trottier Energy Futures Project – spending so much time stopping this oil highway, and so little time starting the clean electricity highway that will enable Canadian green energy to replace American brown energy?

Why are these numbers so far apart? The disparity is not due to a lack of U.S. hunger for clean electricity. The North American Electric Reliability Corporation (NERC) projects that over 260,000 megawatts of new variable power will be needed for the continent`s bulk power system in the next decade – with the vast majority being consumed in the United States. The big reason is that, in contrast to the extensive network of oil pipelines, there are almost no electricity pipelines to get the electrons to market.

There are several barriers to building a clean energy pan-Canadian highway with multiple north-south chutes, but the biggest one is red tape. New grid roll-outs are so bogged down in red tape that the timescales would test the patience of the pharaohs who used to build pyramids – whoever starts a project is unlikely to be alive by the time it comes to fruition.

The U.S. has already recognized this problem and moved to cut some of this red tape with the Energy Policy Act of 2005, which has a provision to invoke so-called National Interest Electric Transmission Corridors. Here’s how it works: the U.S. Department of Energy is mandated to conduct periodic studies on national electric transmission congestion and to designate National Interest Electric Transmission Corridors if deemed appropriate.

Under this law, the Federal Energy Regulatory Commission (FERC) can issue, in certain circumstances, permits for new transmission facilities within a designated national corridor. If an applicant has not received approval from a state regulatory body to site a proposed new transmission project within a year of application, FERC may consider whether to issue a permit and authorize construction of the project.

Invoking such transmission superhighways for Canada to maximize its clean electricity generation potential, with defined provisions that ensure affected local aboriginal peoples are provided a fair stake, makes a lot of sense. This would raise some constitutional and trade issues, but nothing that couldn’t be resolved by some smart lawyers, and smoothed over with some creative financial sweeteners (via access to partial loan guarantees). Such sweeteners would have to come at minimal cost to the treasury, especially in this deficit-challenged era.

The good news is that, for all his green foibles, we currently have a prime minister who seems to get it. In line with Sir John A. Macdonald’s bold vision to connect Canada with the national railway in the 19th century and the network of fossil fuel pipelines laid down in the 20th century, Stephen Harper is sympathetic to a staged pan-Canadian HVDC electricity highway. Such a power highway would unlock what he has identified as an “unprecedented economic opportunity” for getting our abundant clean electrons to the hungry U.S. market.

In fact, probably the most significant federal contribution to reducing greenhouse gases in the past decade was Harper’s pre-election announcement of a federal loan guarantee for the Newfoundland government to support the $6.2-billion Lower Churchill hydroelectric project. Once built, much of the clean electricity from this project is expected to flow through Nova Scotia into the U.S. market, where it would replace dirty power currently generated from coal-fired plants.

In this instance, Ottawa effectively co-signed a $4.2 billion loan, guaranteeing that if either province defaults, the federal treasury would be responsible for the bank payments. Because there is almost no chance of this happening, the loan guarantee is considered cost-free, although a small percentage of it will be recorded on the federal books, according to finance department officials.

Some may wonder why this should not all be left to the private sector. While capital markets can be incredibly efficient at financing certain types of transactions (recall sub-prime mortgages), the plumbing is significantly plugged when it comes to renewable energy projects and grids that cross-cut jurisdictions.

At least in the early stages of grid development and renewable energy deployment, this kind of support is essential for many economically viable projects to go forward, due to the highly conservative Canadian banking culture that has many other opportunities to earn healthy rates of return.

Harper said this type of federal financial support will be considered for projects that meet three key criteria: they must be of “national or regional importance, have economic and financial merit, and significantly reduce greenhouse gas emissions.” He might consider one more: make availability of these loan guarantees conditional on provincial support for national interest electricity corridors.

This brings us to another big barrier standing in the way of a pan-Canadian electricity grid. Parochial by nature, the provinces have short-sightedly clung to their little pieces of the electricity export pie. The 21st century grid will require transcending historical cleavages and reframing the notion of an east-west grid in the context of a pan-Canadian enabler – a grid capable of supplying the vast U.S. electricity market.

Leadership from the federal government will be essential here. Ottawa must demonstrate to the provinces the potential for an electricity export market that is 10 times bigger than it is today. Instead of fighting over crumbs, provinces must come to realize that a pan-Canadian grid with multiple north-south chutes is a means to enhancing access to U.S. electricity markets.

At the same time, the federal government would be wise to expand the scope of Canada`s foreign policy from its whole-hog focus on oil pipelines to the opportunity of building cross-border electricity highways. According to the National Energy Board, 49 states do not count large hydro from Canada toward their renewable portfolio mandate. Our U.S. foreign policy should ensure that U.S. markets are as open to Canadian clean electricity as they are to our oil.

As Canadians, clean electricity corridors represent an opportunity to transform energy from something that divides us to something that unites us, with an estimated annual $70 billion boost to our economic prosperity that slays almost one billion tonnes of U.S. coal emissions in the same fell swoop.

Can someone please pass this message on to our eco-warriors?

This article is adapted from a Manning Centre presentation, found here.