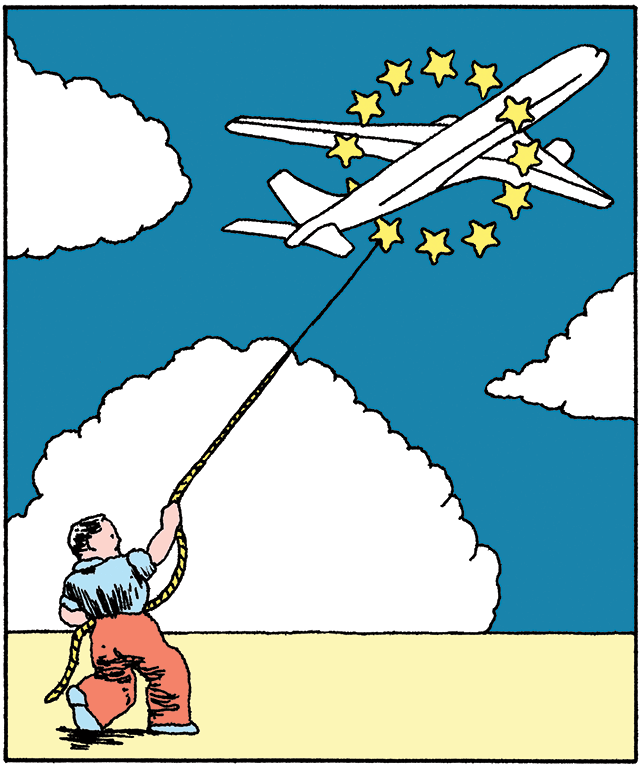 The European Union has dragged the world’s airlines kicking and screaming into its carbon emissions trading system (ETS). Now, the carriers and their governments are battling to scuttle the scheme, which as of January 1 began imposing pollution quotas on all flights that land or take off at EU airports.

China’s aviation overseer vows its airlines won’t co-operate. Legislation before the U.S. Congress would make it illegal for American carriers to comply. Along with India and several other countries, they threaten lawsuits or trade retaliation. Canada has expressed disappointment.

The EU, though, is hanging tough on a plan it estimates will eliminate 70 million tonnes of annual emissions by 2020. “We will not back down from our legislation, and we will not modify it,” says Isaac Valero-Ladron, spokesperson for EU climate action commissioner Connie Hedegaard.

All this over a measure that environment groups describe as a modest first step, and one that will boost ticket prices by far less than airlines’ fuel surcharges or baggage fees.

The groups accuse the industry of hypocrisy: “Negotiations at ICAO have dragged on without result for 14 years … the airlines have tried at every turn to make sure nothing happens,” says Bill Hemmings, program manager at Brussels-based Transport & Environment, which campaigns for sustainable transportation. “The ETS will add no more than 15 euros (about $20) to long-haul flights. That’s less than the daily variations in price. No one worries about them, but along comes an environmental measure and we have an international case.”

The ETS has its origins in the 1997 Kyoto Protocol, which instructed the industry to develop a strategy for reducing emissions – now just three per cent of the global total but rising fast – via the United Nations’ International Civil Aviation Organization, or ICAO.

Seven years later, seeing no progress, the EU decided to add aviation to its emissions trading system, which already covers about 12,000 factories and power plants.

The scheme caps total annual emissions from all flights. This year, the ceiling is 97 per cent of the 2004-2006 average, or about 215 million tonnes. For 2013 to 2020, it drops to 95 per cent. From this pot, credits, each worth one tonne, are allocated among the 900 airlines that must participate – in effect, setting an upper limit on the emissions they’re allowed.

This year, the ETS gives each carrier 85 per cent of its credits; they must purchase the rest. From 2013, the free portion drops only slightly to 82 per cent. Those that emit less than their limit can sell unneeded credits; those over must buy enough to cover their excess.

The credits’ value is set through trading on Europe’s carbon market. In theory, since air traffic is certain to increase while credits stay constant, demand will increasingly exceed supply, raising their value and prompting polluters to reduce emissions.

How that works in practice remains uncertain given the depressed carbon market, where credits fetched about eight euros, or roughly $10.50, at the end of January – close to half the level a year ago.

Even so, the airlines estimate that by 2020 they’ll have bought 700 million credits. That expense, they complain, will force fare hikes, which will make them less competitive and further threaten an industry hurting from overcapacity. The money would be better spent on more efficient aircraft, alternative fuels (see “Green Shades of Jet Fuel”) and other measures that cut emissions, they say.

A study by researchers at the Massachusetts Institute of Technology and Germany’s Muenster University recently generated headlines by concluding U.S. airlines could actually reap windfall profits of up to $2.6 billion from the ETS over the next nine years.

That would occur only if they charge their customers for all the emission credits they require, ignoring the fact they’ll get most of them for free – as some European electricity generators and oil refiners did when they were brought into the ETS.

On the other hand, if the airlines pass through only the costs of allowances that they actually purchase there would be no windfall, and in the unlikely event they don’t pass on any costs their profits would decrease, argues the study, published in the Journal of Air Transport Management.

The EU, meanwhile, dismisses airlines’ complaints of competitive hardship, arguing that since all carriers are impacted none will be disadvantaged. The number of passengers who balk at higher fares will be undetectable among the other fluctuations in demand, it maintains. And if the airlines become more efficient, they’ll need fewer credits.

But opponents also allege the ETS violates international law since it applies to flights over other nations and the open seas, and amounts to an illegal tax. “It’s not so much a financial question or about climate change, but that it was imposed on states outside the EU,” says ICAO spokesperson Denis Chagnon.

In December, the European Court of Justice dismissed a U.S. lawsuit, which Canada backed, based on those claims.

ICAO urges patience, noting its 191 member states have endorsed three of their own measures: 1.5-per-cent annual fuel-efficiency improvements from 2009 to 2020; a cap on carbon emissions after 2020; and a 50-per-cent reduction from 2005 levels by 2050. The members are now to propose how they’d hit these targets.

But ICAO won’t confront the issue until at least 2013 and, critics say, its track record offers no assurance of results, especially since any measures would be “aspirational,” not mandatory.

Europe says conflict isn’t inevitable. The ETS exempts flights from countries with equivalent pollution-fighting measures. And, since it doesn’t require airlines to calculate this year’s emissions or buy credits until March 2013, there’s time to negotiate a wider plan.

While opposing the ETS, the United States might be forced into action. Last summer, a Federal Court judge agreed with environment groups that the Environmental Protection Agency has a legal responsibility to determine whether aviation emissions endanger public health and, if so, to regulate them. The EPA was to respond in February.

And where do Canadian airlines stand? The National Airlines Council of Canada – representing Air Canada, WestJet, Air Transat and Jazz – says voluntary measures to date have been working. For now, the airlines are unhappily complying with the new EU rules, but the council continues to urge the EU to suspend its scheme and wait for global consensus on an international plan.

The EU, having reached for the sky, is showing no sign that it plans to back.