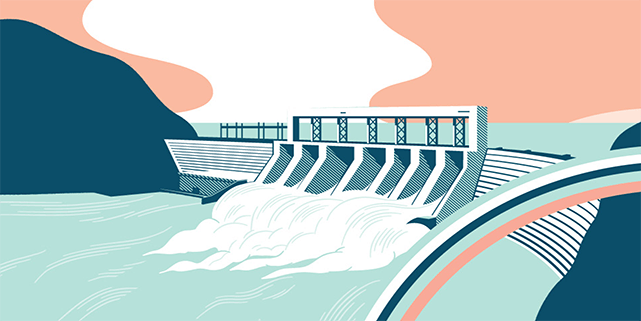 Canada is missing out on a massive export opportunity that would dramatically reduce North America’s greenhouse gas footprint, significantly improve air quality, and create thousands of jobs. It would also diversify a domestic economy where growth to date has hinged to a large extent on oil sands development and the construction of petroleum-carrying pipelines.

It hasn’t been discussed much on either side of the border, but it’s an emerging narrative that promises to capture the attention of Canadian and American business and political leaders facing a barrage of economic, environmental, regulatory and market realities – a perfect storm in the making, the size of which is becoming clearer.

Preliminary research from Boston-based energy consultancy London Economics International (LEI) has found that clean power generated in Canada – mostly from new wind and hydropower projects – could generate $14 billion in additional annual export revenues by 2030, possibly sooner, with sufficient development of transmission infrastructure. That’s more than five times the value of Canadian electricity exported to the United States in 2013, meaning a six-fold increase in the value of total annual exports.

The research, in draft form at the time of writing, was co-funded by Corporate Knights and a diverse group of stakeholders in Canada’s energy and environmental community (visit corporateknights.com for more background). It comes on the heels of a report, published in June by the Canadian Academy of Engineering, which describes Canada’s “clean electricity advantage” as having even greater export potential by mid-century.

Enhanced electricity trade between Canada and the U.S. “offers a strategic environmental and economical advantage that would benefit the entire North American economy,” argues the report’s author Jatin Nathwani, a professor of engineering and environment at the University of Waterloo. He is also Ontario Research Chair in Public Policy for Sustainable Energy.

Nathwani estimates that trade could increase from current levels by “10- to 20-fold or higher” to more than $40 billion a year, which would begin to rival current industry revenues from the oil sands. “Such an epochal change is conceivable over a 30 to 50 year time frame consistent with the time lines for

To reach its higher export scenario, LEI assumed the existence of a carbon price of $80 per tonne of carbon-equivalent emissions, which heavily penalizes coal-fired power generation. It also counted on a 25 per cent increase in the price of natural gas, which at current prices is considered the main competitive threat to renewable power development.

Under its “high” scenario, wind power from Canada would flow primarily from Alberta, Ontario and Quebec, while hydropower – representing roughly two-thirds of additional clean electricity that could be exported by 2030 – would come mostly from British Columbia, Manitoba and Quebec. Also in play is hydropower from Newfoundland and Labrador, where utility Nalcor Energy is planning two massive developments – Muskrat Falls and Gull Island – along the lower Churchill River.

Those two projects alone are expected to generate 16.7 terawatt-hours of electricity a year, much of it targeted for export. A loan guarantee from the Canadian government – which could prove an effective tool to stimulate other large clean power projects across the country – would reduce financing costs and therefore total project costs.

Just as important, however, is whether U.S. markets would demand it. There are a number of moving parts to consider when assessing demand over a 15-year or longer time horizon and across multiple states and regions. In addition to carbon and natural gas pricing, factors that could drive up U.S. clean power demand include growth in electric vehicle use and the rate at which newly introduced carbon regulations accelerate the closure of coal-fired power stations.

Another potential driver: the decline of America’s nuclear reactor fleet. The U.S. Energy Information Administration (EIA) projects that against the backdrop of rising total electricity demand the supply of nuclear power will likely remain flat between now and 2040. And that’s the good news for nukes. The EIA also warned that accelerated retirement of aging reactors and high cost relative to natural gas and renewables could see nuclear supply plunging by up to 70 per cent, creating low-carbon supply shortages that will need to be filled.

Ultimately, LEI pointed out, one critical question needs to be asked: “Do Canadian low-carbon resources have a comparative advantage in terms of investment costs or operations relative to local generation development in the United States?”

There is evidence that certain American jurisdictions are beginning to look toward Canada as a stable source of clean power and an insurance policy against power shortages. ISO New England, for example, is responsible for keeping electricity flowing across Maine, Massachusetts, New Hampshire, Vermont, Rhode Island and Connecticut. It is forecasting potential shortages in its operating region by 2017.

The next few years alone will see coal-fired plants in Massachusetts and a nuclear plant in Vermont among the facilities targeted for closure, creating a hole in supply that the equivalent of four million homes rely on. The concern has created interest in a number of transmission projects across the region that would allow New England states to import more clean power, particular hydropower, from Canada.

But it’s no slam dunk. Transmission projects, which can carve paths into vast distances of wilderness and pass close to people’s homes, can be just as controversial as oil and gas pipeline projects. Meanwhile, there is concern within U.S. industry that importing clean power from Canada will undermine local developers of renewables and, as a result, steal domestic jobs. Why buy Canadian when you should be building and buying American?

It’s partly why most state renewable portfolio standards (RPSs), which require a certain amount of renewable electricity in a jurisdiction’s power mix, don’t recognize the import of hydroelectricity from Canada. The standards tend to favour electricity from wind, solar and small hydro projects developed within state.

“Friendly state regulations for the import of Canadian hydro energy would go a long way toward increasing American consumption of this low greenhouse gas emitting resource,” Andrew Finn, an associate at the Washington, D.C.-based Woodrow Wilson International Center for Scholars, wrote in a recent commentary in the Toronto Star.

If RPSs were to be modified to recognize large hydro, as some New England states are considering, some observers have argued that the percentage of renewables required in the power mix should be increased to maintain market demand for local wind and solar power.

But barriers to increased Canadian clean power exports don’t just lie on the demand side. Many Canadians are deeply suspicious of using what has historically been – and to a large extent continues to be – publicly owned infrastructure to export power, on the belief that private corporations will benefit on the backs of Canadian ratepayers.

And as Nathwani points out, provinces – which have constitutional control over electrical energy within their territory – have been “paralyzed” by the principle of provincial self-sufficiency. In other words, a province’s justification for capital investments has been based strictly on meeting its own needs. “Trade and export of electricity as part of a deliberate strategy to address the climate change challenge is neither part of the discussion nor an explicit consideration in the planning process or approvals,” writes Nathwani.

That needs to change, and it requires leadership at the federal level, argued a 2010 paper published by the Canadian International Council. “An ad hoc approach to electricity exports will likely preclude our successful capture of the full range of economic opportunities,” wrote the paper’s author, Roger Goodman, a senior consultant with IHS Cambridge Energy Research Associates.

Goodman said a more formal mechanism for power exports, coordinated at the federal level, is crucial. “The Canadian federal government should take on a leadership role but work closely with the provinces, as they are the owners of the resources.”

It won’t be easy, but the opportunity is there to seize and the narrative around it continues to grow. Later this year, research from the U.S. National Renewable Energy Laboratory and Canada’s Trottier Energy Futures Project are expected to shed further light on Canada’s true clean power export potential.

The benefits are too important to ignore, on both sides of the border. They include improved electrical system reliability, more efficient use of power generation resources, and substantially reduced dependence on fossil-fuelled power generation that has been a major source of U.S. greenhouse-gas emissions.

For Canada, it would help to offset a large portion of carbon emissions from oil sands development, recapturing the country’s past reputation as an environmental leader. This “twinning” of Canada’s electricity trade strategy and climate change goals, as Nathwani points out, “has the potential to deliver economic prosperity with a much lower national carbon footprint.”

But, he adds, it requires “a dramatic shift in thinking.”