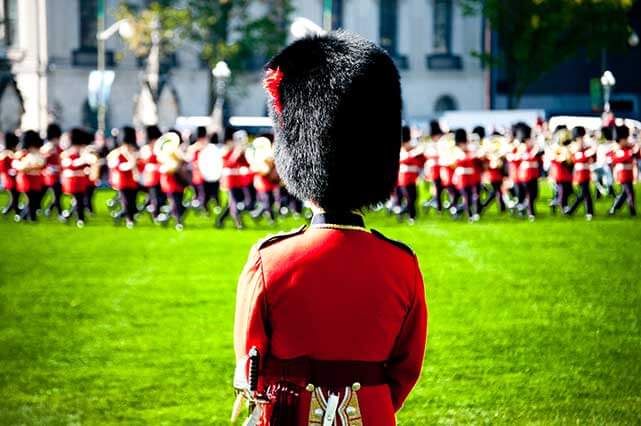 A rather different changing of the guard. Photo by Paste Berlusconi

Four is and has always been my favourite number. Some people think having a favourite number is silly, but the number “4” has meaning when it pops into my head. Sharp. Well balanced. A homonym to the word “for,” which to me represents positivity and agreement and progress.

Three’s company but four is a party. When I started developing my personal signature in high school math class, I even incorporated the number four into the scribble that is my last name. So perhaps it’s fitting that after four years of leading the small but resourceful editorial team at Corporate Knights – which by the way puts out four issues a year – it’s time for me to move along.

This is my final issue as editor-in-chief of this important magazine, which since 2002 has been the voice of clean capitalism and sustainable development in Canada and beyond. Within the corporate world – through our global and domestic rankings and in-depth analysis – we have shown companies and their leaders how to become more responsible members of the community and recognized those who, after embracing that mission, are achieving results.

I leave this role knowing that the connection between sustainable performance, financial performance, and company value has never been stronger, and that the triple-bottom line imperative is becoming conventional thinking to a new generation of business leaders and students. (See our Better World MBA ranking for the business schools leading on sustainability.)

Could it be that reality is starting to sink in for more organizations, political leaders, educators, citizens and consumers: that we’re a fast-growing species living on a planet with finite resources? Water. Food. Energy. Minerals. Metals. A stable climate. All kind of important stuff. Using our resources more productively, making our energy cleaner, growing our food more efficiently – do it well and we might be able to stick around on this planet a little longer and live comfortable lives.

And at the same time, as I say in most of my editorials, we’ve got a lot of work to do – and need to push harder. Climate change, the mother of all issues, is happening at a rate much faster than expected. The latest studies on melting glaciers in Greenland and Antarctica, and associated sea-level projections, are simply shocking. Extreme drought in California and forest fires in B.C., Alberta and Saskatchewan are some of the latest events this past summer to keep the issue top of mind. There will be more.

Key political leaders seem finally to be getting their act together. President Obama has come out strong on the issue. China’s playing ball. As we march toward the much-anticipated Paris climate summit in December, there’s a lot of hope that a serious international deal will be reached. Are we setting ourselves up for disappointment? You can find out what you should and shouldn’t expect to come out of Paris here.

One certainty: If Paris proves a complete failure Pope Francis will be cursing in multiple languages. Four years on, however, I can give you four reasons to remain hopeful.

• The cost of solar has fallen much faster than anyone expected, and renewable energy in general has become cost-competitive with coal and increasingly natural gas. Energy storage is following the same trajectory, and a turning point for when electric vehicles are less expensive and perform better than conventional cars is all but inevitable. That will be the oil industry’s “Kodak moment,” as Chatham House researcher John Mitchell suggests in my story on how oil companies might transition to a low-carbon economy.

• Young people get it and aren’t tied down to conventional thinking. They are changing corporate culture on the inside. They are choosing companies that align with their values, and those companies that don’t will have a more difficult time attracting good talent. Millennials are driving less, sharing more, and approaching problems with a Silicon Valley-type mindset. “They’re coming at the energy arena, not with a 30 year history at a fossil fuel company, but with entrepreneurial, spirited IT experience and a willingness to make things happen,” says Jules Kortenhorst, CEO of the Rocky Mountain Institute. Young people are taking their cues from Elon Musk, not the Koch Brothers.

• The idea of pricing carbon is gaining momentum worldwide, and even seeing some bipartisan support in the United States. Where federal leaders in some countries are resistant, regional leaders – in provinces and states – are bypassing their federal counterparts (yay Ontario!) and going it alone with support from cities. It’s only a matter of time before such initiatives force federal action where none has previously existed.

• More people are hitting the streets and speaking out. Climate protests continue to grow in size. The divestment movement, symbolic of our growing desire for action, is gathering speed. Getting an oil pipeline built has never been more difficult. As you can read on our Keystone XL story here, environmentalists are hitting fossil fuel companies where it hurts, to great effect.

In this environment, I leave knowing that the magazine is in good hands with managing editor Jeremy Runnalls moving up to editor-in-chief, and with associate publisher Natalie Sorichetti and director of research Michael Yow providing critical support.

Finally, a heartfelt thank you to Corporate Knights co-founder and CEO Toby Heaps, a source of inspiration – and occasional frustration – for all of us. Keep up the fight, Mr. Heaps. Honoured to call you my friend.