Adapted from a blog post appearing earlier this year on the website of the International Council on Clean Transportation (ICCT), where Rutherford is a marine and aviation program director.

This year I did a rough calculation of my personal carbon footprint for 2014 using data from our local utility, my own record of travel activity, and emission factors for local transit from a transportation life-cycle analysis (LCA) database – as well as the aircraft performance model developed by the International Council on Clean Transportation.

First observation: my carbon budget reaffirms that I’m in the right line of work. Transportation – especially the 11,000 miles I commuted to the office by train and the 12,000 miles I flew last year for our two family vacations – accounted for almost 80 per cent of my personal carbon footprint in 2014.

In contrast, my residential energy use was modest, thanks to a mix of personal choice (some investments in energy efficiency and sharing a small home with my family) and luck (being located in Northern California, with its temperate climate and a relatively clean electricity mix).

Automobile emissions were low because I only drive on the weekends, and even then in a fuel-efficient car. In total, my direct energy consumption led to about 3.7 metric tons of carbon dioxide (CO2) being emitted last year, which doesn’t look too bad considering the global average of about 5 metric tonnes per person, not to mention the 16.5 tonnes put out by the typical American.

But this figure underestimates how central transportation, especially air travel, is to my carbon footprint because it doesn’t take into account work-related air travel. 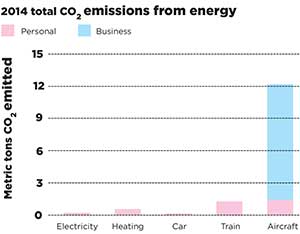 Last year I flew 77,000 miles on 30 flights over nine work trips, releasing an additional 11 tons of CO2. This means that flying for work quadrupled my emissions last year. And this doesn’t take into account emissions of nitrogen oxides, black carbon, and water vapor that likely make a gallon of fuel burned in a plane worse for the global climate than if it were used in a car or truck.

So what can be done about this? If we’re going to be bluntly honest, in the short term, and on the individual level, not always very much; I can’t take a bus to London, and I can’t not go if I want to do my job. This is a systemic problem, not an individual one.

To be sure, individual travelers can vote with their dollars and choose to fly on less polluting airlines, and we should. ICCT research has shown that in 2013 the least fuel-efficient airline in the U.S. released 27 per cent more CO2 than the most efficient carriers to provide a comparable level of transport service, a gap that can be even larger on individual routes.

If more travelers let that fact influence their planning, the industry will have to take notice. For shorter trips where planes, trains, and automobiles really do compete, getting there and back again by a more efficient mode of travel may be part of the solution, too.

But the fact that this is a systemic problem means that we need governments to develop policies internationally and domestically here in the U.S. (and elsewhere) to promote more efficient planes and to impose a price on carbon to curb aviation emissions.

Unfortunately, the jury is out about how ambitious policymakers really will be in the near term. Longer-term, larger investments in new technologies such as blended wing body aircraft, open rotor engines, and third generation biofuels will also be important.

All this, and more, will be needed given that aviation CO2 emissions are on track to triple by mid-century at the same time that many developed countries are resolving to reduce their emissions by 80 per cent in order to avoid dangerous climate change.

The fact that to succeed we have to tackle this as a systemic problem doesn’t mean that personal choice won’t come into play as well. The days of the “road warrior” business traveler are numbered, if we’re serious about reducing GHG emissions from aviation.

We — I — need to be thinking harder than ever about whether it’s really that important to be at that meeting in person rather than virtually (and so do our bosses). At some point more of us will likely have to start enjoying the benefits of staying a little closer to home.