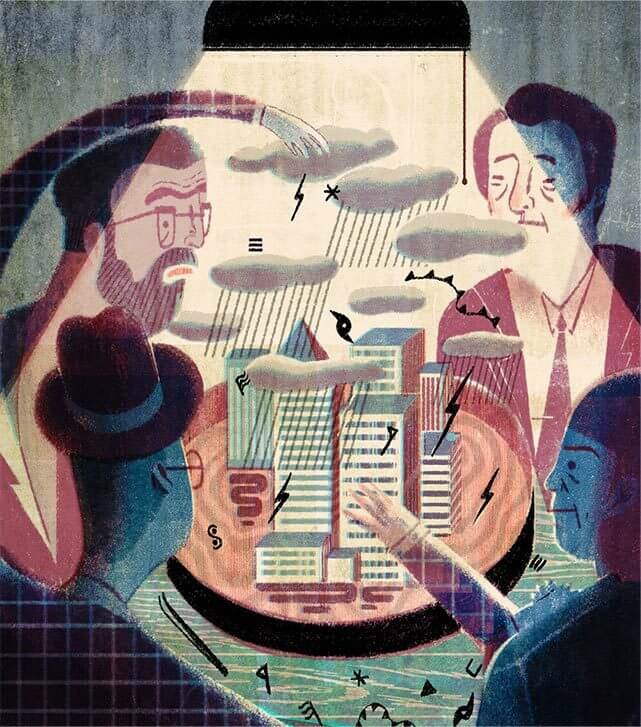 Forty per cent of Americans don’t believe that humans are causing our climate to change. That is a frustrating, absurd, and perhaps even life-threatening problem.

But let’s put those people aside and assume that Corporate Knights’ readers belong to the science-fearing 60 per cent. Let’s agree that the 1,450 gigatonnes of global industrial emissions that humans have emitted since 1751 are a real threat to life on earth. And let’s take at face value the fact that half of those emissions were produced in the last 25 years.

Most people agree that climate change is a real problem requiring immedi­ate action; and yet, concrete solutions at the scale required elude us at every level.

Figuring out who to blame for climate change is little more than a thought experi­ment, mostly because its causes and effects are so diffuse and rarely clear-cut. Still, fig­uring out where responsibility lies is critical to finding effective solutions to the problem, because we can’t win the battle unless we have a common enemy.

There were 400,000 people at the Peo­ple’s Climate March in New York City in September, many of whom marched under a banner that said, “We know who is re­sponsible.” While waiting for the march to start I asked some of those people who was to blame for climate change. All of them had a slightly different, but equally vague, answer: fossil fuels, capitalism, humans. Even at the biggest climate march in history, people found it difficult to point their fin­gers in the same direction.

The Onion put the climate march into perspective when the following day it pub­lished a satirical article titled “7.1 Billion Demonstrate In Favor of Global Warming.”

“Whether they were sitting in their liv­ing rooms, watching football at a bar, or just driving somewhere, a sizable portion of the world let its support for climate change be heard loud and clear,” the article said.

This amusing anecdote points to an uncomfortable fact: no matter how many people march in the streets or how many international climate agreements are signed, climate change is driven by our individual choices. As oil executives rou­tinely point out, no one is forcing us to buy carbon-intensive goods; no one forces us to drive our cars. Fossil fuel companies, they say, are merely supplying what people demand.

But do consumers really have that much control over corporate behaviour and its ef­fects on the climate?

The idea that consumers ultimately con­trol corporate behaviour is ideology, not fact, said Ian Angus, author of the book Too Many People? Population, Immigration, and the Environmental Crisis.

For starters, corporations use their im­mense wealth to influence consumer choice. This tips the scales in favour of corporations that spend large amounts of money trying to persuade consumers to buy certain prod­ucts, said Angus.

The term “consumer democracy” is also inaccurate because consumers are not equal, he said. The capitalist market is a plu­tocracy where we all participate, but a tiny minority of very rich people has decisive influence.

Finally, market choice is restricted to the “micro-choices” that corporations pro­vide in the market, said Angus. While con­sumers have the ability to choose between certain products, they don’t control what products companies choose to offer in the marketplace.

The big decisions – how and where goods are manufactured – are based on what produces the best return on capital. Blaming individuals for climate change trivializes the problem and takes attention away from the real cause, which is a global economy that values profits over the long-term survivability of the planet, he said.

Angus’ hypothesis is not new, but it seems to have gained some traction in pop­ular culture over the last year.

To coincide with the People’s Climate March in New York City, Naomi Klein re­leased a book called This Changes Every­thing: Capitalism versus the Climate, which presents evidence for why unregulated cap­italism is incompatible with life on Earth. The book garnered impressive hype. Vogue even published a lengthy review of Klein’s book and chronicled her rise to superstar activist status. Klein’s theory certainly has its critics, but her message is being heard loud and clear: the polluter has to pay.

The term “polluter,” though, is still not specific enough.

Published in the journal Climactic Change, the study showed that 90 companies were responsible for 63 per cent of global carbon dioxide and methane emissions be­tween 1751 and 2010. Almost all except for seven were oil, gas and coal companies. Fifty of those were public companies, including Chevron, Exxon, British Petroleum and Roy­al Dutch Shell. Thirty-one were state-owned companies, including Norway’s Statoil, Sau­di Arabia’s Saudi Aramco and Russia’s Gaz­prom. Nine were government-run enterpris­es that mainly produce coal.

The companies were headquartered in 43 different countries and extracted re­sources from every oil, natural gas and coal province in the world. They processed fuels sold to customers in every nation on earth.

Why not go one step further? If you nar­row the top polluters down to just one CEO or decision-maker, you could load them all onto a Greyhound bus or two, said the re­port’s author.

This is an interesting thought, but can we actually hold a busload of people account­able for something as nebulous as extreme weather? Is it fair to reduce a collective problem down to a few handfuls of people?

Severin Borenstein, a business profes­sor at the Haas School of Business at the University of California, Berkeley, told Cor­porate Knights that the Climactic Change study is a “copout.”

He draws a line between corporations that purposely mislead the public with false information about climate change and those that are simply producing products that consumers demand. The idea that we demand a high quantity of a product at a low price and then blame the producer when it has negative environmental con­sequences is misguided, argued Borenstein. The only barrier to non-fossil fuel transpor­tation is that it’s expensive – at the end of the day people are most concerned about transportation being cheap, he said.

In Borenstein’s view, governments need to enact a carbon tax that will level the play­ing field for clean technologies. They also need to provide more support for research and development to help create better alter­natives in the marketplace. But he stopped short of blaming government itself, also call­ing that a copout. “The government is us,” he said, adding that the answer to climate change is an electorate that is willing to pay a little more for fuels and subsidize research and development for clean technology.

But can citizens be trusted to wean themselves off of a product to which they are so clearly addicted? At what point is an intervention justified?

It is not unheard of for government to put its foot down when it comes to improv­ing our collective wellbeing. Mandated safety features in cars made vehicles more expensive. Nuclear regulations added costs to atomic power generation. Environmen­tal regulations have increased the price of many products and services. In many cases, political leaders have had to stand up to unhappy electorates simply to do what was best for the common good.

Regardless of what side of this debate you fall on, there is still a question of wheth­er or not our legal systems can make the link between the impacts of climate change and corporate behaviour.

This may seem like a far-off dream. But remember big tobacco? Lawyers had a hard time establishing liability in that case, and the legal system found a way. Some experts are confident the same can be done with cli­mate change. A few countries, including Ja­pan, South Africa, Israel and Brazil, already have legal mechanisms in place that could accommodate climate change suits against specific companies.

If courts do find a way to hold corpora­tions accountable for climate change, some companies could find themselves bankrupt. If that day ever comes, however, it’s likely to be too little, too late.