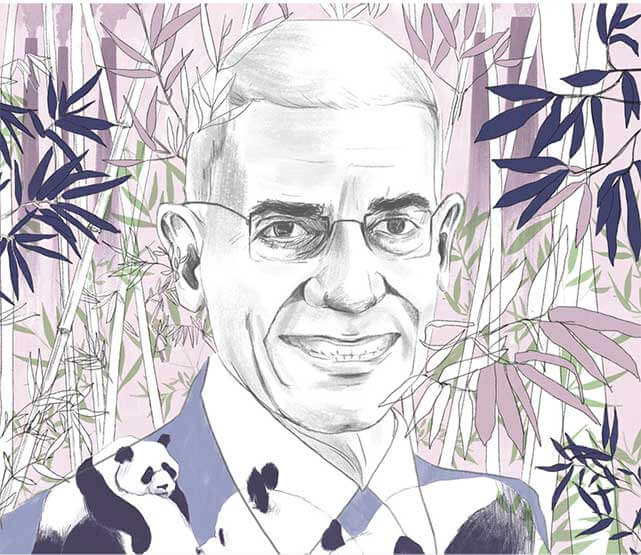 For a company infamously described as “a great Vampire squid wrapped around the face of humanity,” Goldman Sachs has produced a remarkable number of high-profile alumni committed to combatting the collective threat of climate change.

Henry Paulson, the former Goldman Sachs Group chief executive and financial crisis-era treasury secretary, spearheaded a report last year called “Risky Business” in an attempt to convince investors that climate change is bad for their bottom line. One of the advisors listed on the report? Former Goldman co-chairman and Clinton treasury secretary Robert Rubin. Meanwhile, another Goldman alumnus has developed into one of the most respected voices on climate investment risk: Robert Litterman.

In the small world of quantitative finance, Bob Litterman is a household name. As one of the world’s leading risk managers, Litterman first gained acclaim through his pioneering work at Goldman Sachs where he co-developed in 1992 the Black-Litterman Global Asset Allocation Model.

Making partner in 1994, Litterman went on to head up the firm’s risk department and then the quantitative group in the asset management division. In the latter position, he oversaw a group that, at its peak, managed over $185 billion (U.S.) in assets. It was during this time that he was asked to join the board of the World Wildlife Fund (WWF).

While not very familiar with conservation and other environmental issues, Litterman brought a unique perspective to the board. He’d studied human biology at Stanford University as an undergraduate, where he became interested in the way humans responded to incentives. He decided to transition over to economics and pursue a PhD after a brief stint as a journalist, moving on to spend a few years teaching at the Massachusetts Institute of Technology and working at the Federal Reserve Bank of Minneapolis.

Litterman joined the WWF board in 2007 just as global awareness was beginning to spike around sustainability issues, with the Intergovernmental Panel on Climate Change and Al Gore sharing a Nobel Peace Prize for their work around climate change that year. “Having worked in academia, central banking and then risk management on Wall Street put me in a position to have a framework when thinking of climate risks that’s a little bit unique,” Litterman explained in an interview with Corporate Knights.

After leaving Goldman Sachs in 2009 and helping to found Kepos Capital, an asset management firm, Litterman started to grow more concerned about the calamitous risks that climate change posed to the planet. But it was the release of the Carbon Tracker Initiative’s seminal publication in July 2011, “Are the world’s financial markets carrying a carbon bubble?” that set him on a new path.

The central premise behind the carbon bubble is that global action is needed to keep average global temperatures from rising above 2 degrees Celsius to avoid catastrophic climate change – that is, to keep climate change somewhat manageable. As governments around the world take increasingly assertive action to limit emissions, a significant chunk of coal, oil and other carbon reserves (likely more than two-thirds) will have to be left in the ground. These unburnable assets have yet to be adequately accounted for by the market, with significant implications for the market valuations of fossil fuel companies.

“It’s not just that we have yet to price climate risk appropriately, but today’s equity markets believe that any actions to institute adequate pricing are far down the road,” explains Litterman. “The biggest short-term risk to investment portfolios is that companies with stranded assets are going to be re-priced downwards by the market as the prospect of carbon pricing becomes more immediate.”

So why does drastic action need to be taken to reduce emissions immediately? As an individual steeped in risk management, Litterman is fixated on the worst-case scenarios. The scientific evidence for climate change is overwhelming, he explains, but there remains a great deal of uncertainty about exposure to the most dire climate scenarios.

“We’re doing an experiment by altering the climate here that has never really been done before, and scientists have been consistently preaching to expect the unexpected,” says Litterman.

As global temperatures continue to rise, so does the likelihood of a calamitous shift in the Earth’s ecosystem. “The most prudent way to guard against such a scenario is to hit the brakes hard at first – hard enough, in fact, that you expect to solve the problem,” adds Litterman.

Over the past four years, Litterman has transformed into an ardent advocate for carbon pricing and protecting portfolios from climate-related risk. From speeches around the country to op-eds in the pages of USA Today and others, he’s been busy trying to educate Americans on what those risks are and how to manage them.

He even took his arguments to the pages of Regulation Magazine, published by the Cato Institute, an American libertarian think-tank that once counted conservative Supreme Court Justice Antonin Scalia as editor. He’s joined the boards of the Asset Owners Disclosure Project and Climate Central and recently teamed up with Henry Paulson and others to fund climate change research papers.

Over the past two years, the notion of stranded assets has begun to gain acceptance in the mainstream. Major financial institutions, such as Citigroup, HSBC and ratings agency Standard & Poor’s, have acknowledged the risk stranded assets pose, and the Bank of England is currently conducting an inquiry into the potential overvaluation of fossil-fuel companies.

Bank governor Mark Carney warned last year that the “vast majority of [fossil fuel] reserves are unburnable” under a 2-degree scenario, while the deputy head of the bank’s prudential regulation authority, Paul Fisher, told an insurance conference in March that the stranded assets risk is real.

Investments in fossil fuels “may take a huge hit,” said Fisher, pointing to “specific examples” of it already happening but stopping short of describing them.

Skepticism within the financial community remains, however, even among so-called climate hawks like economist Larry Summers, another former U.S. treasury secretary and former Harvard University president turned professor. Summers, having spoken with some of the world’s smartest investors on the topic of “unburnable carbon” and stranded assets, said most don’t consider it a threat – at least not in the near future.

“There are real limits on how much you’re going to move investors,” he told a group of investors during the World Economic Forum.

To be clear, Litterman isn’t a big fan of wholesale divestment of fossil fuel holdings – at least not yet. He doesn’t feel like there’s a strong economic case. Instead of dumping specific funds with fossil-fuel company exposure from WWF’s endowment, he designed a separate financial product that hedges against the risk of stranded assets. It’s a technique he encourages other investors to embrace.

This derivatives contract, the WWF Stranded Assets Total Return Swap, is attractive for a number of reasons. First off, explains Litterman, it’s a straight-forward tool. Conducting a company-by-company analysis to determine its level of exposure to emissions pricing would be a difficult task, but making valuations based on the level of coal and oil sands reserves is simpler.

To avoid having to sell off assets or seek out external managers and ask them to change their investment approach, Litterman decided to leave the underlying WWF portfolio untouched and add a derivatives contract on top, which shorts the dirty guys. “It’s very clear what we’re doing, we’re betting that stranded assets are going to underperform the S&P 500, and that’s certainly a bet I like,” he says.

The product has performed exceptionally well, returning around 85 per cent since January 2014 (performance numbers updated Feb. 2016). “So if you think of it from a fiduciary position, you have no reason not to do it,” says Litterman. “It both reduces risk and increases expected return, and in the case of the World Wildlife Fund, it aligns our portfolio with our mission, which is to protect ecosystems throughout the world.”

In a way, the threat of divestment has helped his strategy. This past year has seen a number of high-profile announcements from large institutional investors, municipalities, universities, and religious organizations committed to phasing out fossil-fuel holdings through divestment. Litterman feels this movement has impacted the valuations of the targeted companies.

Understanding that it’s not the only factor – other people would point to the fortuitous decline in oil prices for one – he still finds it notable how closely aligned performance is with some of these big divestment announcements over the past year.

“Remember, it’s not just the actual pricing of emissions that affects the valuation of these assets, it’s also the expectations of emissions pricing coming sooner and at higher levels than people previously expected, and I think that that has certainly happened over the last year,” he adds.

Rather than base its entire responsible investment strategy on the stranded assets total return swap, WWF has also hired funds to invest in the green economy. Litterman doesn’t think that clean energy investments are a bad idea, but they’re not as sure a bet.

Considering Litterman is an inductee into the Risk Hall of Fame – yes, there actually is one – it’s a perspective that would be unwise to ignore.