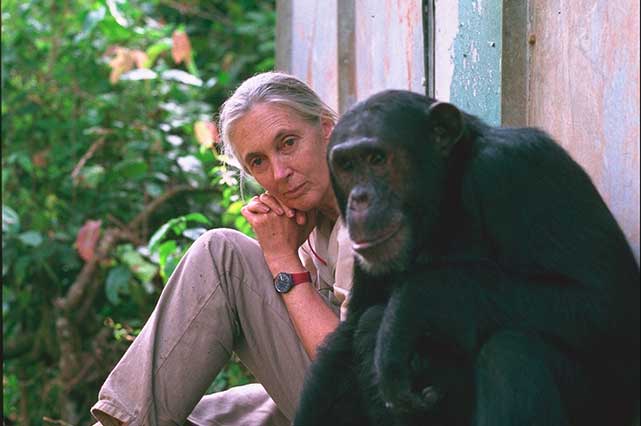 One day, while sitting outside my home in Dar es Salaam, in Tanzania, 12 high school students stopped by wanting to talk about wildlife. We discussed many problems: poaching in the national parks, the absence (at the time) of environmental education in schools, cruelty to animals in the market, stray dogs, street children, dynamiting coral reefs to catch fish, and so on.

They wanted me to fix everything! I suggested that, working together, they might be able to do something themselves. After our discussion, the students went back to their schools, formed groups with others who shared their concerns, and we had another, bigger meeting.

Thus was the birth of Roots & Shoots, now a global network of young people of all ages who become involved in hands-on projects of their choosing: one for their local community, one for animals (including domestic animals), and the third for the environment. There are always some young people who love animals, some who want to help people, and many who want to help the environment. They discuss local problems. They ask if there is something they can do to improve things. If so, they work out a plan, roll up their sleeves and take action.

Back in 1991 there was an explosion of activity – and volunteerism was born in Tanzania as a result. (My first group of 17 to 19 year olds was mocked for cleaning up a beach littered with plastic bags and refuse without being paid. In Tanzania at that time, you only worked without pay for your parents – and only because you had to).

Well, Roots & Shoots groups are now in nearly 140 countries, with members from pre-school through university. An increasing number of adults are also forming groups. Today, there are some 150,000 groups around the world. The collective impact is huge. And because we encourage young people to take action and listen to their voices, they are empowered. (And they influence their parents and grandparents as well as their friends). 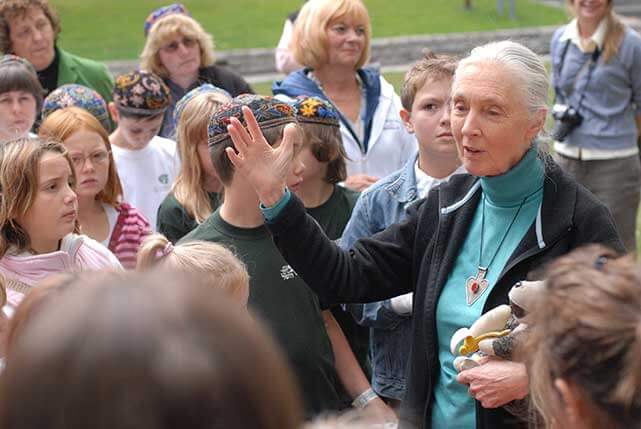 The individual efforts of hundreds of thousands of young people around the world together are making monumental change. With an overall theme of learning to live in peace and harmony with each other they are learning to respect others and thus breaking down barriers between nations, religions, cultures, old and young, rich and poor, and between “us” and the natural world.

The Roots & Shoots program, and its philosophy, is the reason why Kofi Annan, then Secretary General of the UN, asked me to become a Messenger of Peace, and why Secretary Ban Ki-moon re-appointed me.

The main message is: “Every single one of us matters and has an impact – every single day. And we have a choice of what sort of impact we will make.”

There is an oft-heard saying, “Think globally, act locally.” But thinking globally, thinking about the harm we have inflicted on the planet, the poverty, greed, violence and so on, often leads to a feeling of helplessness – “What can I do that could possibly make a difference?” And so we do nothing.

But our Roots & Shoots groups see the impact their actions can make, such as installing trash bins on a school campus, cleaning a stream to re-introduce fish, planting indigenous trees and shrubs in the school yard to encourage birds and butterflies. Knowing that hundreds of other young people are also creating change in this way – acting locally – they then dare to think globally.

We are working on ways to show the extraordinary difference our young people are making around the world. Some groups tackle long-term projects such as removing invasive species from an area of prairie in Texas, or a wetland in Taiwan. There is a lot of tree planting.

Some have changed laws such as a group from Santa Monica that was instrumental in banning plastic bags in California. Many schools grow vegetables – without chemical pesticides of course. Some volunteer in shelters for the homeless or for dogs and cats. They raise money for earthquake or hurricane or war victims in other countries, or become Chimp Guardians. 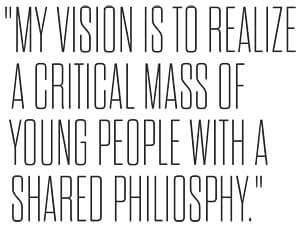 University students return to the local community to help start Roots & Shoots groups in primary or high schools near their campus. Members join another group, or develop their own campaigns – to help save elephants and rhinos and tigers, for example. They collect and recycle cell phones; they lobby for labeling for genetically modified products.

Art, theatre and music have always played a big part. I love to hear 10-year-old kids in the middle of nowhere in Tanzania performing plays about the damaging effects of deforestation and overfishing. In the Bronx, African-American and Latino kids performed a skit where one student was the head of a large company, and another student informed him about the environmental harm caused by his product. (In the end that group succeeded in banning polystyrene from their school lunches – and got to perform in front of the mayor.)

Roots & Shoots develops differently in each country. Sometimes the program is embedded in a school curriculum, thus reaching all the children in the school, and increasing the number of kids willing to roll up their sleeves and get to work on projects. This is often because the education ministry asks us to provide a curriculum. A whole class or school can become involved, or a family group can form – there’s room for all.

My vision is to realize a critical mass of young people with a shared philosophy – the Roots & Shoots philosophy. Once students have been active Roots & Shoots members they are impacted for life, as so many have told me. I asked one of the young men who was part of the original group of 12 what aspect of Roots & Shoots had been most significant.

After a moment, he replied: “I know that wherever I go in the world, even if I know no one, if there is a Roots & Shoots group I have found my family.”