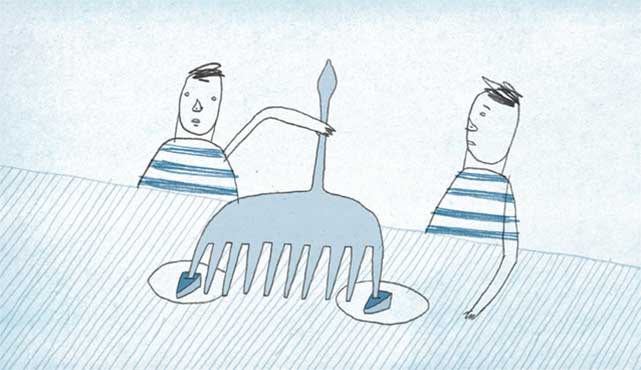 True story, Word of Honor:
Joseph Heller, an important and funny writer
now dead,
and I were at a party given by a billionaire
on Shelter Island.
I said, “Joe, how does it make you feel
to know that our host only yesterday
may have made more money
than your novel Catch-22
has earned in its entire history?”
And Joe said, “I’ve got something he can never have.”
And I said, “What on earth could that be, Joe?”
And Joe said, “The knowledge that I’ve got enough.”
Not bad! Rest in peace!”
— Kurt Vonnegut

Back in April 2012, I was having an old cheddar, pickle and onion sandwich with my friend Nick Robins on an uncharacteristically bright and sunny London afternoon at Canary Wharf outside Nick’s then office at HSBC. Nick said there was a big idea coming down the pipe that promised to shake up global finance by some guys from an outfit called Carbon Tracker.

A half year later, the climate activist Bill McKibben’s “Global Warming’s Terrifying New Math” article in Rolling Stone, based on the Carbon Tracker analysis, launched a full-scale divestment movement by laying bare the simple equation that burning all of the reserves owned by fossil fuel companies was a number far in excess of the global carbon budget necessary to avoid climate chaos. Less than two years later, the governor of the Bank of England, Mark Carney, began expressing concerns about the potential shock to the financial system of a carbon bubble popping, which Carbon Tracker’s math foretold.

By the time the Paris climate talks rolled around late last year, investors with $3.4 trillion (U.S.) in assets had announced they were divesting from stocks most exposed to the carbon bubble, a term coined by Carbon Tracker. After the breakthrough in Paris that brought 195 countries together to agree on ushering in a zero-net carbon economy sometime this century, UN climate chief Christiana Figueres singled out the work of Carbon Tracker for having focused the minds of investors, making the ambitious climate deal possible.

So you can imagine my surprise when I sat down to a high-level dinner in Davos in January organized by Carbon Tracker, and the main course was nothing but the culinary equivalent of the Hummer: a slab of beef. For those tracking carbon, beef accounts for six per cent of global emissions, more than all cars combined. Of course, most of us are struggling to cope with information overload and the next deadline, and are largely oblivious to the meaning of our consumption and investment choices.
But this struck a personal chord, making me realize how oblivious I had become to being a willing cog in our culture of waste and excess, pretending to be in a mirage of limitless resources.

I have lived as part of an urban tribe that eats out daily and throws rotten food into the compost on a weekly basis, with little or no consideration of where the food comes from or how it is prepared. I know it is trite, but we are what we eat. If this is the kind of sloppy attention we pay to eating – the most visceral connection we have to nature and its limits – no wonder our civilization is blowing past all the warning signs toward the climate cliff.

As people chomped down their steaks, discussion turned to institutional investors and how we could entice them to adopt carbon budgets for their portfolios. My mind drifted to a more mundane topic, and I decided to impose a food budget on myself: $30 for the month of February (no cheating), the same budget that over a billion people live on every day.

So 29 days and a lot of dal (lentils), rice, oatmeal, onions, potatoes, broccoli and discount bananas later, I am happy to report no scurvy, a clearer mind, heightened sense of taste and smell and a new ethic to not waste anymore.

I am not exactly sure how this connects to portfolio decarbonization, but I’d like to think that maybe by mindfully appreciating the little we need, we can let go of the insatiable wants leading us astray.