The recent climate change conference in Marrakech saw the Canadian government release its Mid-Century Long-Term Low-Greenhouse-Gas Development Strategy, and with it a requirement for “very deep emissions cuts from every sector by mid-century.”

The magnitude of the contribution that the agricultural sector (and indeed the entire food system) makes to global emissions continues to be widely under-appreciated, eclipsed by discussions of transportation and electricity-related emissions reductions.

According to the United Nations’ Food and Agriculture Organization (FAO), agriculture sectors now account for at least one-fifth of total global emissions; the majority of these emissions come from the conversion of forests to farmland, and from livestock and crop production.

The second half of the 20th century saw a profound transformation in agriculture, with consequent improvements to productivity bringing increased food security to many parts of the world. With the beginning of the new century, however, there has been a reversal of these gains and nothing short of another transformation is needed in order to continue to feed an ever-expanding population and to prevent escalating emissions from derailing global efforts to mitigate climate change. 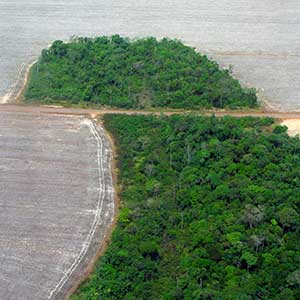 Clear-cutting to make way for farm land in the state of Matto Grasso, Brazil.

Agriculture’s contribution to carbon dioxide emissions arises mainly from deforestation and from forest and land degradation: a 2008 study showed that as much as three-quarters of worldwide deforestation and forest degradation could be attributed to agriculture. Where this trend used to be predominantly the result of smallholder practices, forest clearing is now increasingly driven by agribusiness – a position likely to be consolidated by further urbanization and globalization. As an example, the palm oil industry, with a compound annual growth rate of 7.3 per cent, is increasingly displacing tropical forests across Asia, Latin America and West Africa.

A focus on direct agricultural emissions alone shows agricultural soils acting as a carbon sink (that is, absorbing rather than emitting), resulting in a very small net flux of carbon. The problem lies with the more potent greenhouse gases, methane and nitrous dioxide, which form the bulk of direct emissions. These arise mainly from enteric fermentation in livestock, the application of nitrogen fertilizer and manure, and rice production in flooded fields.

The very largest share of these direct non-CO2 emissions, calculated as CO2 equivalents, can be apportioned to livestock: inefficiencies in ruminant digestive systems (yes, it is the belching that is the real problem) accounting for 40 per cent; manure left on pasture (the greater the density of accumulated dung and urine, the greater the emissions) at 16 per cent; and manure management, 7 per cent.

Emissions from synthetic fertilizer accounted for 12 per cent of total agricultural GHGs in 2014, but are destined to move up the ranks to place second only to enteric fermentation within 10 years. According to the World Bank, current yield gains (at 1 to 1.5 per cent) are barely ahead of population growth. With global food demand projected to increase by around 20 per cent over the next 15 years, and by at least 60 per cent by 2050, production increases and efficiency gains from across the food system will be vital.

Tradeoffs will abound as the system grapples with a need both to preserve forest and reduce land-use change while increasing output. An increase in global synthetic fertilizer use is likely as agricultural intensification takes hold. Will smallholders resist the temptation to expand their agricultural lands as they see their yields increase through intensification? Will the lands be allowed to degrade, leading to greater emissions, with the overuse of inputs?

Both production and over-application of synthetic fertilizer are problematic from an emissions perspective. The energy-intensive production process occurs on a large scale in China, where it relies heavily on coal-based energy. Over-application, which results in nitrous oxide emissions, is prevalent in developing countries where the smallholder often applies the fertilizer by hand.

Paddy rice cultivation is a major source of global methane emissions (the warm, waterlogged soil providing ideal conditions for methanogenesis), contributing around 11 per cent of global C02-equivalent agricultural emissions. Asia is responsible for almost 90 per cent of this, and while the past decade has seen emissions slowing, increasing population density in Asia may reverse this trend.

The burning of biomass, while less significant than rice cultivation and chemical fertilizers in terms of impact, contributes approximately 5 per cent of direct global agricultural emissions. This usually manifests itself through savanna fires and the burning of crop residues. Peatlands and mangrove ecosystems, both carbon sinks suffering under encroaching agricultural development, have significantly declined in area over the last three decades, with related increases in emissions.

While we focus on the individual parts of the agricultural sector that appear the most problematic from an emissions perspective, we should not lose sight of the overall global food system that these parts feed into. The combined imperatives of increasing production and reducing emissions demand a systems perspective. While agricultural emissions represent one-fifth of total anthropogenic emissions, the global food system, from pre-production through to post-production, is responsible for up to one-third of man-made GHG emissions.

Between 14 and 20 per cent of the total emissions contribution of the food system comes from preproduction – predominantly fertilizer and animal feed production, and the postproduction activities of processing, packaging, refrigeration, transport, retail, catering, domestic food management and waste disposal. As the global population grows and the middle classes expand, we can expect increased demand for meat, which one estimate pegged at 76 per cent in the next 30 to 40 years, with associated high pre-production and production-stage emissions. This will be coupled with a growing demand for more highly processed foods, with typically higher post-production emissions.

Waste across the food system, and not just at the end of the chain, is grabbing increasing attention as resource productivity and emissions reductions are sought at every turn. Emissions related to food loss and waste get heavier the further down the chain the waste occurs. While data is scarce at the production stage, and there are significant regional differences, available estimates show between 2 and 12 per cent of food loss occurring on the farm. Postharvest losses in the developing world are often the result of inadequate storage and transportation. Infrastructure advantages in the developed world see the burden of waste shift downstream, where embedded emissions are most significant, with up to 50 per cent of total food waste attributed to the consumer.

According to the FAO’s Save Food Initiative, reducing global consumer food waste could save between $121 billion and $300 billion (U.S) and reduce carbon by 1 gigatonne (Gt) per year by 2030. Compare that to the annual contribution of forests to carbon sequestration, estimated at 1.8 Gt in 2014, down from 2.8  Gt annually in the 1990s.

A variety of solutions will be needed to tackle the numerous causes of agricultural emissions, something policymakers and the general public will be wrestling with in the decades to come. Some synergies can even be found between food security, adaptation and mitigation within food systems.

But it needs to be on the radar first.