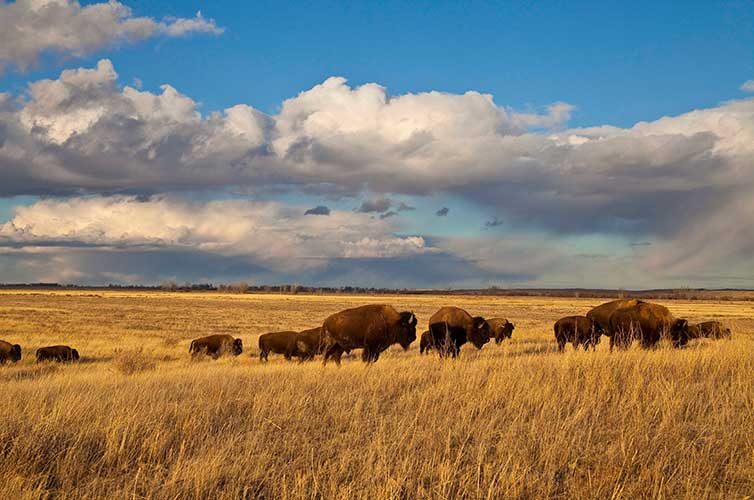 In north-central Montana, pronghorn bound effortlessly over the landscape, the white blazes on their sides catching the sun. Clouds scud across the endless sky. A vast, unbroken sea of grass and sage stretches to the horizon, 100 miles distant. Through it all, the Missouri River cuts a deep cleft into the plains, snaking east from its headwaters in the Rockies. Hawks wheel overhead. The sound of wind is ever-present.

In many ways, this swath of the Northern Great Plains looks strikingly similar to when Lewis and Clark first ventured across it more than 200 years ago. There’s no denying that the place has changed – departed are the bison herds that once numbered in the millions, and gone are the grizzlies and wolves that trailed them across the miles. But vestiges of humans are few and far between, and much of the flora and fauna remains as it always was. Because of this, the region has become the focus of a unique, ambitious and controversial conservation project.

“We’re essentially attempting to preserve the Great Plains ecosystem,” says Hilary Parker, spokesperson for the American Prairie Reserve (APR). “And in order to preserve grasslands on an ecosystem scale, you need between 3.2 and 3.5 million acres.” Put into perspective, that’s roughly the size of the state of Connecticut, or 50 per cent larger than Yellowstone National Park.

In the 1990s, the international conservation community realized that grasslands had largely been overlooked when it came to ecosystem-level protection. So overlooked, in fact, that there were only four major grasslands left in the world still intact enough to be viable candidates for large-scale conservation: a portion of both the Mongolian and Kazakh steppes, a slice of Patagonia and the North American Great Plains.

In 1999, the Nature Conservancy zeroed in on North America, and in particular this quiet, wild corner of Montana, and issued a report highlighting the area as a viable option for restoration. It had a lot going for it: Although the area had been homesteaded and grazed, more than 90 per cent of the acreage had never been tilled for crops, which meant it still boasted intact, native prairie. Additionally, the area included the Charles M. Russell National Wildlife Refuge, a 1.1-million-acre tract of preserved land. At the time there was talk of creating the Upper Missouri River Breaks National Monument (ultimately created in 2001), which protected another 375,000 adjacent acres. And around these two tracts lay a vast smattering of public lands, held and managed for multiple use by state and federal governments.

It seemed that if one could purchase 500,000 acres of private land in and amongst these private holdings, one just might be able to stitch together a 3.5-million-acre patchwork of prairie. And if that were possible, wouldn’t it also be possible to then open those lands to the public, and manage them for wildlife, recreation and ecosystem health? Conservation professionals began tossing around the idea of an “American Prairie Reserve.” It could be an ambitious new kind of park, managed collaboratively by state, federal and private stakeholders, where the people of the world could come to camp, fish, hunt, bike, horseback ride and immerse themselves in the beauty of the prairie.

In short order the World Wildlife Fund stepped in to get the ball rolling, as did the North Plains Conservation Network. In 2001, the American Prairie Foundation was formed as a nonprofit, with an eye toward acquiring land and guiding restoration projects. Within months it began purchasing private property in the region and leasing grazing lands on adjacent Bureau of Land Management (BLM) allotments.

In 2005, APR released 16 genetically pure American bison on its newly owned land, a homecoming that was a century in the making. The herd now numbers around 800, but the ultimate goal is far higher. “We’d like to get that herd to 10,000,” says Parker, “to offer the world a gold-standard preservation of that genome.”

With more than $90 million committed to the project (largely from private donors, including an impressive array of well-known philanthropic families) and more than 350,000 acres owned or leased, the vision of a preserved, intact wide-open prairie landscape now looks a lot more like a reality than a dream.

The only problem is, that landscape wasn’t empty when the APR herd got there.

“It does appear that as their bison population expands, they’ll continue to phase out livestock, and those grazing leases for cattle will ultimately shift over to bison,” says Jay Bodner, the natural resources director of the Montana Stockgrowers Association (MSA) and also a born-and-raised Montana rancher. MSA is the voice of ranching interests in the state and has been a vocal opponent of some of APR’s plans and tactics – and especially the notion that the landscape will be better off without cattle. 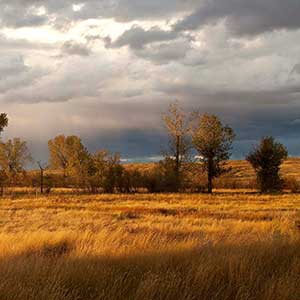 “The fact of the matter is that much of this ground is in such fantastic shape already because of the ranchers that are out on the landscape today,” Bodner says. “It’s a point of pride. We have about 4,000 grazing leases on BLM land in the state of Montana, and we’re meeting rangeland health standards on over 90 per cent of those.”

APR hopes to run bison on its grazing allotments with very minimal management, a stark contrast to the regimented approach area ranchers have historically taken on grazing land.  Although Montana requires that private bison herds be managed as livestock, APR’s goal is to allow its herds to behave as much like wildlife as possible. This raises questions for some area stockgrowers. Vicki Olson’s family has been ranching in the area for 100 years, and she’s concerned about APR’s hands-off practices. “Near and dear to our heart is land management, and we think this is a major step backward. We think in the end it’ll hurt the rangeland.”

Locals are keeping a wary eye on real estate prices as well. As APR purchases rangeland from willing buyers, there is concern that the price per acre will soon outpace what working ranchers can afford.  Olson worries not only about the future of the landscape, but also of a way of life. “Ranchers here want to buy land and expand so they can bring their children back,” she says. “I’ve heard people from elsewhere saying, ‘Oh, you’re all old, I bet you can’t wait to get the heck out of here.’ Well, I don’t want to! You’ll find people here with a love of the land that’s unsurpassed anywhere.”

APR is adamant that its goal is to create a reserve that makes room for everyone on the landscape – including ranchers. “We’re in no way anti-cow,” says Parker. “Right now, the public lands are fragmented under multi-use philosophy for ranching. Hey, there’s nothing in the world wrong with that. But, if we want to save our grasslands, we want to be able to restore all of the wildlife that used to be there, and that included pronghorn, prairie dogs, big horn sheep, elk, swift fox, black bear, coyote, wolf, grizzly.”

Ultimately, the long-range vision of APR is to build a fully functioning, intact prairie ecosystem that supports the flora and fauna that flourished here thousands of years ago. Parker posits that APR’s end goal isn’t simply a question of getting what it wants, but of making sure that the place itself is healthy and thriving. “The scale of this project absolutely requires collaboration in order to succeed. It’s not about APR succeeding, it’s about the ecosystem succeeding – and you don’t build an ecosystem, you support it.”

Olson tries to be optimistic, although she can’t help but feel that of everything living on the landscape, the ranchers may be the most endangered species of all: “They say we have to find common ground, but if their plan is to succeed, that means I have to leave. I don’t see much common ground there.”