Aerial view of the residential area of the suburb of Milton during the great Brisbane Flood of 2011, the worst flooding disaster in Australia’s History. Image includes submerged parkland and local dining area of Rosalie.

For a growing number of Canadians who have experienced basement flooding, they describe it using remarkably similar language – you would not wish it upon your worst enemy.

As foreboding as this sounds, it is even more lamentable that flooding knows no geographic bias, with homeowners from Halifax to Victoria bearing the costs of flooding first hand. In short, there is no safe zone when it comes to the potential for residential flooding in Canada.

More specifically, as documented by the Insurance Bureau of Canada, property and casualty insurable losses jumped from an average of $405 million per year between 1983 and 2008, to an average of $1.8 billion per year from 2009 to 2017 (with data normalized for inflation and per-capita wealth accumulation). Flooding contributed more to this increase than any other factor. With this increasing risk, a new phenomenon has emerged in Canada beginning circa 2016 – growth in the un-insurability of the residential housing market. The percentage of homes across Canada that are uninsurable has not been quantified, as the number is dynamic and growing.

Additionally, with many Canadians struggling to meet their financial obligations, homeowners with limited insurance coverage could find themselves in mortgage arrears in the event of a flood. The average restoration cost of basement flooding in Canada is $43,000, which is compounded by an average of seven lost person-days from work per affected household. The Canadian Payroll Association reported that as of 2017, 47 per cent of Canadians would find it difficult to meet their financial obligations if their pay cheque was delayed for one week, thus suggesting that basement flooding, in the absence of adequate insurance, could result in homeowners not able to meet scheduled mortgage payments. One of Canada’s largest banks is currently tracking for spikes in mortgage defaults, following floods, in cities where insurance coverage has been reduced in recent years.

In light of flooding being Canada’s most formidable and growing climate challenge, the question so many homeowners are asking themselves is, “What, if anything, can I do to avoid a flooded basement?” Fortunately, there are a number of actions that can be engaged around a home to limit flood risk, at minimal cost with a positive return and that do not require special expertise. Despite this optimism, it is important to bear in mind that limiting risk is not the same as eliminating risk. If Noah’s flood hits, most houses will flood despite all pre-emptive actions.

Outside of the home, at the lot level, there are four simple steps that are often overlooked by homeowners that can limit the probability of water entering into a basement:

• Once in the spring and once in the fall, and following any major wind storm, leaves should be swept away from storm drains, which allows water to drain without restraint.

• During a major storm, homeowners should inspect their property for water pooling close to the foundation. Post storm, these areas of depression should be filled and graded to direct water away from the foundation.

• In the fall, after trees shed their leaves, eaves should be cleaned. Additionally, if downspouts drain into the weeping tile system, they should be disconnected, extensions added, and water should be directed to a safe discharge location two metres from the foundation.

• Plastic covers should be placed over window wells, thus allowing light to enter, but preventing water from filling the window well during major storms. Where possible, windows at grade level should be water tight.

In the event that water does enter the basement, several precautionary steps can be taken to limit potential damage:

• Prior to a storm, sump pumps should be tested to ensure they have not seized and that they discharge water – this can be accomplished by pouring a bucket of water in the sump well. Additionally, because power often goes out during major storms, a back-up battery that can power a pump for up to 72 hours should be installed.

• Importantly, basement floor drains should be checked to ensure they are not blocked by obstructions.

• Finally, valuables and mementos should be stored in waterproof containers, at least a metre above the basement floor, to ensure they are not subject to water damage.

The return on investment for strong flood risk protection is high.

If you took 1,000 homes, put the average cost of flood protection actions per house at $500 (downspout extensions, plastic covers for window wells, sump pump, battery back-up for sump pump), the cost of protecting those homes would be $500,000.

Otherwise stated, for every $1 spent on flood protection, the savings per 10-year period, per household, would equal $4.30.

That’s a big savings for individual homeowners, insurers, the housing market and Canadian society as a whole.

Also, given that even the least capable handyman could install the above equipment, the installation costs for flood protection equipment would be negligible or non-existent for most homeowners.

These kinds of steps will save homeowners money when it comes time to buy insurance. Large property and casualty insurers, such as Intact Financial, have said that by taking these steps, “Canadians could lower their annual premiums – anywhere from 5 to 15 per cent.”

For homeowners who wish to do even more, a new option will soon be available.

Going forward, homeowners should seek home inspectors with certification in home flood risk assessment. Over the next few years, as graduates from the course grow in number, all homes that go on the market should be subject to an assessment review and remediation. No one should buy a home without a thorough assessment performed by a qualified practitioner.

For many Canadians, their home is their primary investment vehicle and, ultimately, their retirement fund. Every homeowner should, at a minimum, implement the eight simple actions described above as a first line of defence against basement flooding, and every mayor and councillor should support a door-to-door campaign in communities to introduce homeowners to these steps.

These actions will not only serve the financial interests of homeowners and communities in the near term, but also position Canada to stop chasing climate change and to get ahead of the bigger floods that are yet to come. 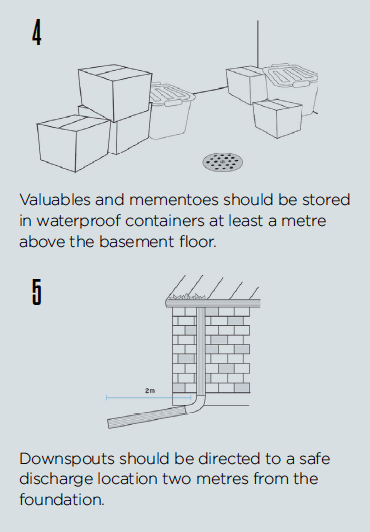