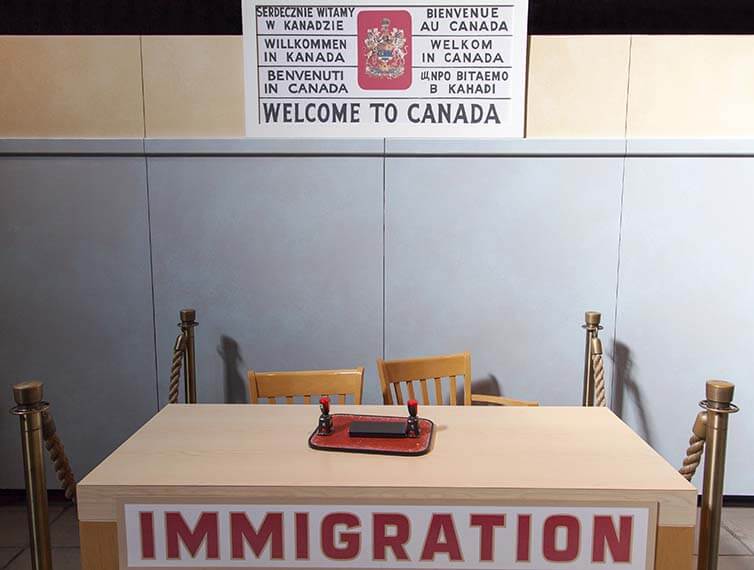 The Globe and Mail’s long-time foreign affairs correspondent is a busy man these days, covering everything from Catalonia’s burgeoning independence movement to ethnic cleansing in Myanmar. But one question has been fascinating Doug Saunders for the past 15 years: Why does Canada have such a small population, and what are the negative consequences of that?

His book Maximum Canada delves into this very question, detailing Canada’s long legacy of what he calls “minimizing” policies during the century after Confederation – high trade tariffs, limited immigration from outside of the British Isles and an overemphasis on immigrant farmers over entrepreneurship, all of which have resulted in our current population of only 35 million.

Other periods in Canadian history have seen the growth of “maximizing” policies, including over the past 50 years or so. The country should expand its ambitions even further, argues Saunders, and shoot for a population of 100 million by the end of the century. The book details the myriad benefits that would result, but one of his more intriguing arguments involves a substantial environmental dividend.

Corporate Knights recently sat down with Saunders to discuss the need for bigger and denser cities, the growing immigration shift to second-tier cities and the international development gains from migratory ties, among other things.

CK: Can you outline the ecological benefits Canada stands to gain from a larger population?

Saunders: Canada has a low population density, spread across a very large geography. Now, this is due in large part because we developed accidentally. We developed our cities not by planning to have concentrated, dense cities that were centres of business and invention, but rather as an afterthought. Well into the 20th century, Canada viewed itself as a rural country and a country of resource extraction, and we saw the cities as being side effects of that. As a result, our cities did not grow from concentrated centres outward, but they grew as collections of housing, with a few churches in between.

We have very large areas of extremely low population density housing and, much more frustratingly, those are the areas where new immigrants settle now. Immigration is a suburban experience now in Canada, almost 100 per cent, and it happens in places with big empty spaces, with apartment blocks with huge empty spaces between them within places with single family housing. Now, these neighbourhoods, and this form of development, not only create problems for the improvement of human conditions through transit efficiencies and mixed-use neighbourhoods and so on, but are also extremely ecologically inefficient.

By my calculation, about half of Canada’s carbon output comes from the effects of low population density in cities. This includes passenger vehicles in urban areas, which we rely on overwhelmingly because of our lack of transit both within and between cities that’s high speed and efficient, as well as our inefficient heating of buildings, itself a consequence of low population density with our reliance on single-family houses that are inefficient to heat. There’s also our reliance in several provinces on emissions-heavy energy sources, which is much easier to physically transition away from when you have a higher population density.

Canada’s cities are small compared to other countries, and have not yet made the transition to what is called the ecological Kuznets curve. This is when you get above the population of Canada’s six largest cities. Each addition of population decreases the per-capita carbon footprint and creates efficiencies. Now, a lot of those efficiencies have to do with green policy; they’re the consequence of shorter travel distances, of economies of scale, of shared resources and so on.

As the studies I highlight in the book point out, a city of eight million is twice as ecological as a city of four million. Economies of scale are important, not just for economic and for business reasons, not just for the clusters of knowledge and expertise and entrepreneurship that they create, but also because of the ecological efficiencies they create.

Now, as much as Canada needs to make that transition towards being carbon neutral much sooner than we anticipate, we also need to be able to make ourselves resilient to whatever climate change effects do happen. Those types of infrastructure investments, particularly if they’re going to be done in a green way, are best done in places with a high population density. 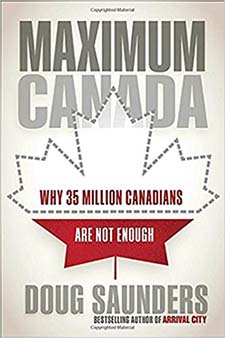 CK: One relatively new concern being raised by urban studies theorist Richard Florida and others is the growing economic gap between superstar cities and the rest of the population, in both the U.S. and Canada. He argues that overly strict land-use rules and NIMBY sentiments, by artificially restricting the supply of new housing, have increased housing prices so much that it has slowed this gap from growing even further. As immigrants tend to settle in the biggest urban environments, won’t increasing levels of immigration only increase this gap between white, rural and smaller cities and super-diverse superstar cities?

Saunders: Canada’s five or six largest cities will continue to be major places of population growth, and generally it’s to be encouraged. These cities are not overcrowded; they suffer from low population density. However, that housing market effect that Richard Florida mentions does have some interesting consequences in Canada.

We do have a crisis of housing supply in our largest cities, that’s quite obvious. We need to address that, and in large part it’s due to a bias towards the single-family house. Apartment living should be destigmatized and accepted as a normal way of living – we’re the only country in the world that has a word for living in an apartment, “condo”, that is a form of ownership tenure and not a form of building, and somehow, we treat that as a stigmatizing term.

That said, the place where we start to see the interesting effects of that divergence in housing markets is in the very interesting effects that are happening in what get called the second-tier cities in Canada. These are post-industrial cities that have suffered from population loss, aging and therefore a loss of tax base and shops and economic activity, but that are becoming the new hubs for immigration and for population growth because they happen to have post-secondary institutions in them.

What immigrants want in Canada are known business, employment or entrepreneurial opportunities. Second of all, they want clusters of people from similar cultural or linguistic backgrounds to help them integrate and build up a network. Thirdly, they want post-secondary institutions, because about six out of 10 immigrants to Canada have a university degree and need their skills upgraded. And fourth of all, they want housing they can afford.

Immigrants will always drop the last point if the first three are available; people will settle in a place they can’t afford to live for a while if it has all the other factors. But the fact that housing is getting close to unaffordable in the largest cities is causing a big shift in immigration settlement to post-industrial second-tier cities with post-secondary institutions and reasonably decent connections to larger markets.

So Kelowna, Lethbridge, Kitchener/Waterloo, Hamilton, Kingston, Ottawa, Trois-Rivières, Moncton, Halifax, St. John’s – those are the places that are going to become really significant centres of growth because of the interesting combination of affordable housing costs and post-secondary institutions. And we need to recognize that these places are ideally situated to become dense clusters of knowledge, invention and expertise, and they are also places that can become really green, ecologically efficient cities. We need to be investing in electric rapid-transit links in and between those second-tier cities and the established larger markets. We need to be investing in data infrastructure in those places, and we need to be investing in green housing and building initiatives as well.

CK: Andrew Griffith and others have hypothesized of resistance from Indigenous peoples and Quebecers to a large increase in Canada’s population due to the likelihood of a reduction in their relative political clout.

Saunders: What makes Canada different from a lot of former colonies is that Indigenous nations see themselves as being leaders in population growth now. The century during which Canada was subject to what I call the minimizing impulse, where Canada pursued a bunch of isolationist policies, was a period that was devastating for Indigenous nations. The attempts to settle Canada by filling the land with people rather than by creating cities and economies from the 1850s to the1970s, that period saw Indigenous nations’ population fall to about a tenth of its previous level.

In Quebec, similarly, there was a big debate in the 1940s-’50s about whether francophone Quebecers should see their challenge as being one of relative population or one of absolute population. And there was, for a time before the 1950s, a belief that relative population was what French Canadians should seek – which was, they should do whatever they could in regards to Quebec policies but also in terms of Canadian national policies to ensure that Quebec has the largest proportion of population in Canada, so that Quebec maintains its share of MPs, PMs, etc.

By the end of the 1960s, there was a very broad consensus that absolute population matters more than relative population in Quebec. There’s a great understanding that Quebec is underpopulated – you could say that francophone Quebecois are a generation ahead of English Canadians in recognizing the shortfalls of absolute population and the need to have a more robust population.

CK: Most of the pro-immigration arguments in both your book and in the broader public discourse in Canada centre on the economic gains from immigration. What about the global development gains?

Saunders: Canada’s migratory links to the global south are Canada’s most important form of international development. Just the remittance flows from families living in Canada alone are many times higher than all of the foreign aid spending Canada has ever contemplated.

The way immigration works is that you have networks of people in clusters of villages or in urban districts in ascending countries who link themselves up permanently to clusters of people with similar cultural backgrounds in specific urban areas in Canada. And they form lasting links – they send people back and forth, credit, money, knowledge, and they contribute to the development of those places.

A big part of that development is creating ecological efficiencies. Take, for example, the Philippines, which has been the largest centre of immigrants to Canada for the last decade. The Philippines, if you look at the clusters of villages in Luzon, the big island that most Filipinos in Canada come from, those areas that have migratory links to the western world have seen much higher standards of living, lower infant mortality rates and higher life expectancy, but are also more likely to have made the transition from subsistence to commercial agriculture.

Most importantly, they’ve also been much more successful in making the fertility transition, going from having six children per family to fewer than two children. So, you could say that Canada, in creating migratory links to places in the developing world, is helping those places develop in terms of human development, in terms of economic development and in terms of ecological development, because stabilizing population growth is probably the most important ecological target.