For those of us who’ve suffered through veggie burgers reminiscent of chewy, salted hockey pucks, it’s a great time to be alive. Fast-food chains and food companies, both big and small, are tripping over each other to deliver the world’s newest and tastiest plant burgers to a growing market of vegans, vegetarians, flexitarians and the plain plant-curious.

Canadians, however, were mostly relegated to reading about the latest plant burgers – until A&W got in on the action. Yes, the chain best known for its baby boomer-pleasing root beer decided to get a piece of the much-hyped pea-based Beyond Meat burger before any other national burger franchise in the country.

“Normally, product development of that nature takes quite a long time,” says A&W CEO Susan Senecal. “But we were focused on trying to make it happen as quickly as we could, and we were able to launch the burger six months after we first tasted it.”

It proved to be a shrewd move. 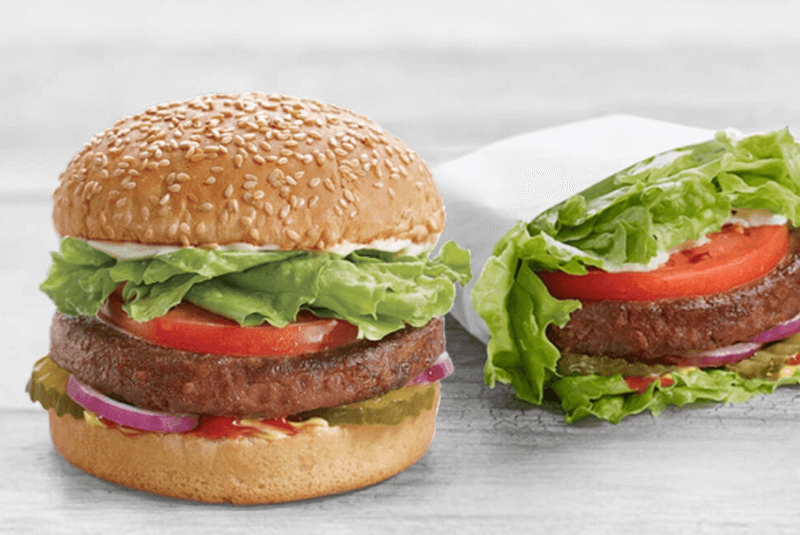 Over 90,000 split pea-based patties were sold in the first three days of its launch in July 2018. Many locations sold out on day one and Beyond burgers sold out nationwide within weeks. The plant burger shortage only fuelled the growing hype.

Suddenly the stodgy old chain was filling up with millennials and new clients that had never visited before. Some locations even reported higher sales of the vegan burger than beef ones.

Although A&W has promoted the heck out of the fact that it carries Beyond Meat, the Silicon Valley burger upstart comes with its own multi-million-dollar promotion machine. Beyond Meat has a small army of celebrities lining up to endorse or invest in it, including over a dozen pro athletes, rapper-investors Snoop Dogg and Common, and founding celebrity-investor Leonardo DiCaprio. It’s the kind of publicity that really can’t be bought on a Canadian budget.

Yes, analysts have slagged Beyond Meat for failing to break even a decade after its founding, but capitalist forces seem to be aligning behind plant burgers. When Beyond Meat was listed on the NASDAQ in early May, it had the best IPO of 2019 with its share price more than doubling on the first day of trading.

There’s no denying that carrying Beyond has helped fuel A&W’s sector-shirking growth.

“In 2013, the quick-service industry was flat at best. A&W knew they needed to disrupt the market and differentiate in order to succeed,” notes Rethink Canada, the chain’s advertising agency. The root beer pusher was saddled with an aging boomer demographic (and its waning interest in fast food), while new premium burger joints were popping up across the country like portobello mushrooms. If A&W was going to attract coveted 25- to 44-year-olds, it would need to tap into their growing concern about how their food was made. 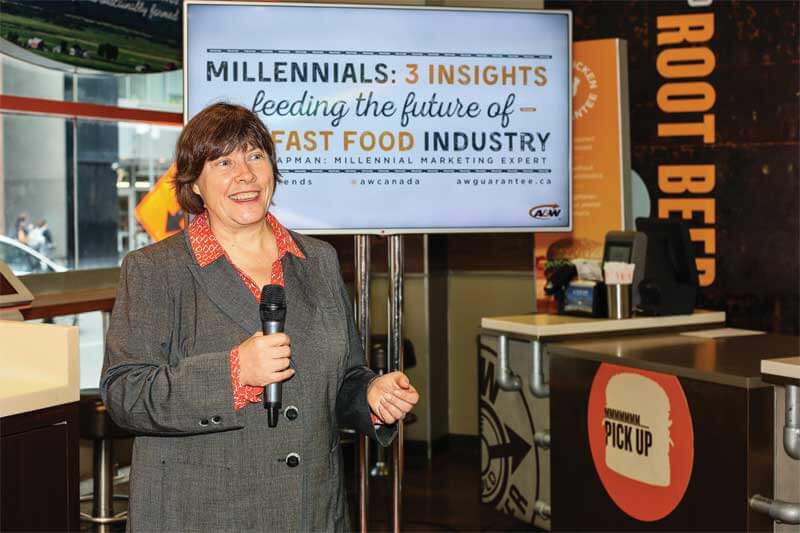 That early market research into the “fast foodie” movement spawned a switch over to largely grass-fed, steroid- and antibiotic-free beef back in 2013, followed by a steady stream of boldly-promoted “ingredient guarantees” on antibiotic-free chicken and pork, as well as eggs from vegetarian hens. “The home of the burger family” started serving organic, fair trade coffee, brought in ceramic plates and cutlery at breakfast and started brewing its famous root beer with natural flavours.

By 2017, A&W was the fastest growing quick-service burger chain in Canada. That year, it opened its 900th restaurant and shifted away from suburban drive-throughs to more urban locations.

In 2018, sales really took off. And while Senecal won’t say how many Beyond burgers the chain has sold, she did tell Corporate Knights that sales have remained “steady from the get go” and that it’s now one of A&W’s “top-selling burgers.”

No matter how you slice it, same-store sales were up 10% in 2018, from 3.4% in 2017 and 7.6% the year prior. The Vancouver-headquartered chain is betting big on continued growth with dozens of new stores under construction.

Millennials have been credited with driving much of that growth. The debt-conscious generation may not spend quite as much on restaurants as boomers and Generation Xers yet (depending on who you ask), but, according to new research from CBRE, they’re “driving up demand for low-priced food options such as fast casual and fast food.” And A&W knows it. (It even has a low-equity millennial franchisee program.)

“We’ve really started to build a much stronger bond and connection with our millennial guests,” says Senecal, the chain’s first female CEO. She has spent four decades pushing beef burgers for A&W, first as a manager, then as a marketer, and now as chief executive officer (who’s clearly still a natural marketer at heart). “We’ve seen rapid growth in terms of the number of millennials choosing us when they want a great tasting burger.” 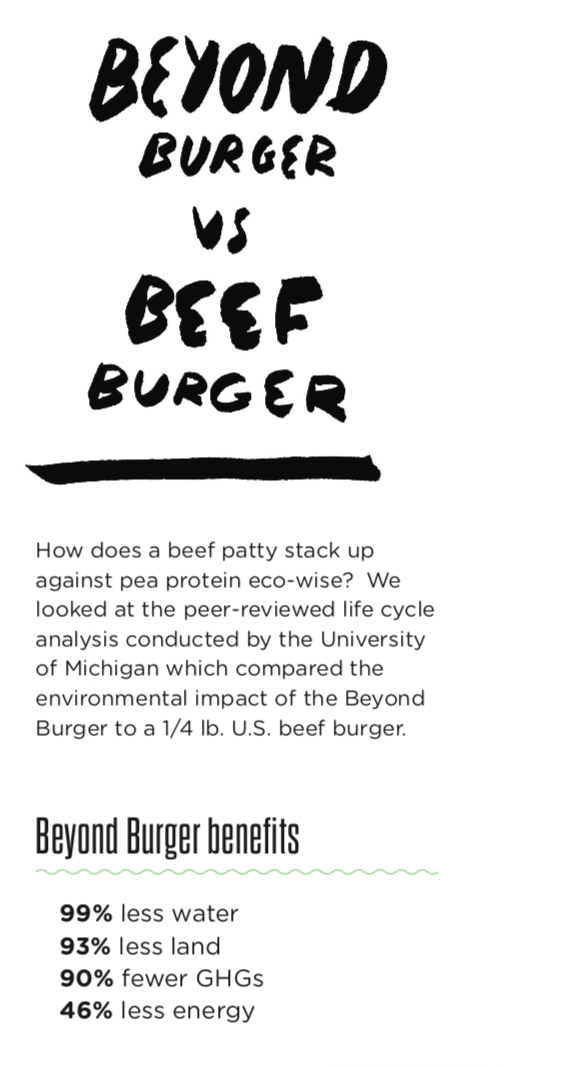 It just so happens that a lot of millennials are looking for a great tasting burger made of plants. Mintel found that 80% eat meat alternatives compared to roughly half of non-millennials. And much to the plant burger advantage, according to Forbes, “a full 70% of the world population is reportedly either reducing meat consumption or leaving meat off the table altogether.”

Although A&W already had a veggie burger on its menu, Senecal told Corporate Knights in a phone conversation from her office in Vancouver that they “kept searching for a veggie burger that people would choose, not one they’d settle for.” When the team first tasted the Beyond Meat burger in 2017, “it was love at first bite.”

Stir into the mix a ban on plastic straws that kicked off in 2018 and A&W is now officially the wokest of the large national burger chains. On point with the plastic-purging trend, says Senecal, A&W has also eliminated over 90% of disposable items in its restaurants.

That’s not to say that A&W is beyond reproach. The majority of its eggs are still not cage-free (though hens live in “enriched colony housing”) and while it says it’s committed to phasing out gestation crates for sows, its pork is still not crate-free.

Nonetheless, to a growing number of Canadians, A&W is the best of the big boys. Sure, Beyond Meat’s highly publicized rollout into Canadian grocery stores this summer could cut into some of A&W’s restaurant sales. Thankfully for Canada’s second biggest burger chain, the generation reviving A&W’s fortunes isn’t a big fan of cooking.