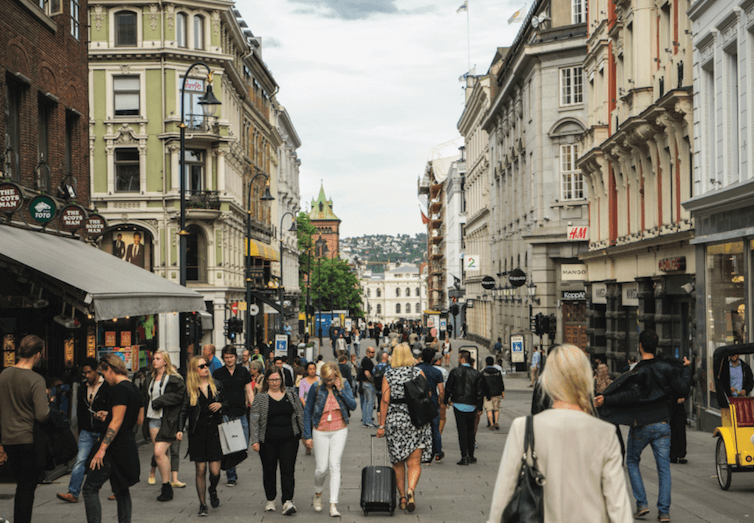 Oslo has just phased out the last on-street parking spaces in its city centre, giving a leg up to pedestrians, cyclists and transit.

When a Labour-Green coalition replaced the Conservative party at Oslo’s city hall in 2015, change was on the table. But one of the council’s promises – to become the first European city to ban motor traffic in the heart of the city – collided head-on with angry motorists and a business group that claimed such a ban would create a “poorer city” and a “dead town.”

So the Norwegian capital tried a new tack. It has just phased out the last on-street parking spaces in the city centre, giving an edge to transit, pedestrians and cyclists without banning cars.

The initiative included incentives for cyclists such as new bike lanes, including better lighting and snow removal, along with subsidies for electric bikes and cargo cycles. Council also expanded transit services and lowered fares.

But Oslo is just one of many cities taking aim at traffic. Here are a few steps some cities are taking to reduce pollution and boost quality of life.

• London, England, just announced that it will close 20 kilometres of roads for its biggest car-free day yet on September 22 and promises to launch weekly and/or monthly car-free days in different locations across London. This year it will unveil a new transportation strategy for its “Square Mile” centre that’s expected to designate half of the streets as either car-free or “pedestrian priority.” London also pioneered congestion charges to discourage downtown traffic in 2003.

• Germany is creating a “Green Net” of car-free corridors that will connect cyclists and pedestrians in 10 German cities (including Hamburg) as well as four universities. The “autobahn for bikes” is expected to get 50,000 cars off the road each day by 2022.

• In Berlin, construction crews are building 100 km of bike super-highways, four metres wide. A related initiative will ban cars from some roads. “It will alter the streetscape forever,” says one local cycling activist.

• In Paris, cars built before 1997 are not permitted in the city centre on weekdays. Since October, cars have been banned downtown on the first Sunday of each month. Paris now plans to double its bike lanes and limit certain streets to electric cars by 2020.

• The broad boulevards of Buenos Aires now include dedicated bus lanes – reducing bus traffic on side streets. This is helping the city create more and more pedestrian zones, where cars are either banned or restricted to a speed of 10 km an hour.

• In Toronto, city council voted in April to make permanent a pilot project that discourages cars from driving on a 2.5-km section of King Street through the city’s financial core. The King Street corridor prioritizes streetcar traffic.

Clearly, this is a time of daring change (in some places). Though that progress shouldn’t be taken for granted in volatile political climates. Last November, Madrid rebranded 500 acres in its urban core as an “ultra-low emissions zone,” banning older diesel and gas-powered vehicles (unless the owner has previously registered a parking spot). One local newspaper estimated downtown traffic was immediately reduced by a third. Though as Citylab just reported, “Following knife-edge elections at the end of May, however, that progressive policy looks to be “condemned to death,” as one newspaper headline on Tuesday put it dramatically.

“I think it is important that we all think about what kind of cities we want to live in,” Oslo’s vice-mayor recently told Fast Company magazine. “I am certain that when people imagine their ideal city, it would not be a dream of polluted air, cars jammed in endless traffic, or streets filled up with parked cars.”

A version of this article appeared in the Summer Issue of Corporate Knights magazine.