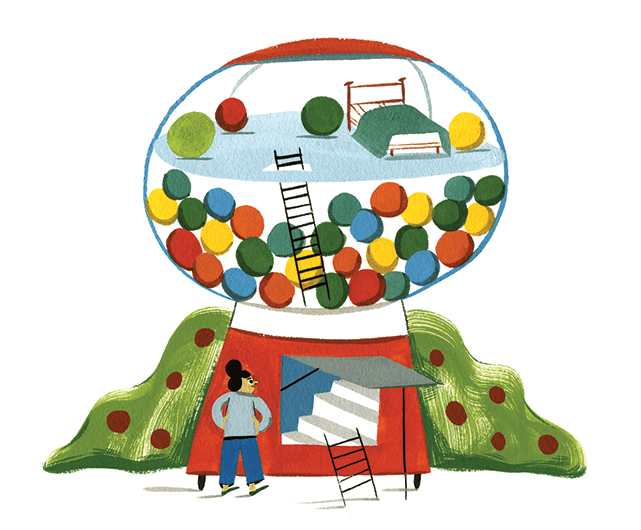 Sabrina Lee-Brewster has a particular talent for a particularly challenging task: getting residents from Detroit, the third most unbanked major city in the United States, to sign up for savings accounts.

Although her charm goes a long way, Lee-Brewster also has a compelling pitch. Open an account, she tells them, and have a chance to win a big cash prize. The concept is called prize-linked savings, and it’s capturing the attention of more financial institutions.

With prize-linked savings, a lottery layer is added to a savings product. In the case of Lee-Brewster at Michigan’s Communicating Arts Credit Union, that product is an account with the Save to Win program. The minimum monthly deposit is $25.

Members of the program are awarded the equivalent of a lottery ticket for every $25 deposited, including entry into an annual jackpot of $100,000. Members are free to make one withdrawal every year after the first. “That’s my selling point. You’re not losing anything. You can win just by saving,” says Lee-Brewster, the credit union’s top seller of the unique accounts.

Save to Win is a four-year-old program, unique to North America. Yet it builds on a centuries-long, international line of prize-linked savings products. The combined track record of these products and the research indicate they’re an efficient way to encourage personal savings – especially among those least likely to put money away for a rainy day, but who are most in need of doing so. Despite the historical and academic evidence, and the need in North America for savings innovation, regulatory barriers have prevented testing the concept’s full potential in the U.S. and Canada.

Before taking a closer look at prize-linked savings’ past, it’s important to consider two current financial trends. First, both Americans and Canadians are big into lotteries. In fiscal 2010, according to the Rockefeller Institute, the 43 state lotteries in the U.S. were the main source of state gambling revenue, bringing in about $18 billion. Surveys by the Consumer Federation of America and the Financial Planning Association released in 2006 found nearly 40 per cent of Americans with incomes below $25,000, about a fifth of the general population, thought winning the lottery was the most practical way for them to accumulate hundreds of thousands of dollars.

North of the border, the 2010-2011 Gambling Digest published by the Canadian Partnership for Responsible Gambling reported that the four largest provinces – Ontario, Quebec, British Columbia and Alberta – had all taken in nine-digit net lottery revenues in the previous fiscal year. Ontario led the pack, raking in over $900 million. According to the digest, lotteries were the most popular form of gambling in almost every province.

While money has flowed into lotteries in the U.S. and Canada, savings rates in both countries have dried up. In their Assets & Opportunity Scorecard for 2013, the Corporation for Enterprise Development found nearly a third of American households had no savings account. A survey released in May this year by the Financial Industry Regulatory Authority (FINRA) found 40 per cent of respondents would probably or certainly not be able to come up with $2,000 in case of an emergency. Meanwhile, in Canada, at around the time FINRA released its data, Certified General Accountants Association of Canada noted Canadian household savings rates had dropped from a peak of about 20 per cent of disposable income in the early 1980s to less than 4 per cent by the end of 2012.

What more people do have today is ballooning levels of personal debt, and servicing that debt makes it difficult for individuals to save money. Canadian economist Mark Anielski makes the link to sustainability, equating rising debt levels and the “chronic societal stress” it creates to cancer cells that “grow out of control until they finally consume or destroy their host.” Debt can become the antithesis of wellbeing. Personal savings, to stick with Anielski’s analogy, can be viewed as antioxidants that boost household resilience.

Enter prize-linked savings, which turns the consumer’s weakness for lotteries into saving strength. “That’s precisely what appealed to me about these products when I first heard about them, when I studied them in England and South Africa, and ultimately tested them in the U.S.,” says Peter Tufano.

Currently dean of the Saïd Business School at the University of Oxford, Tufano is a prolific researcher and founder of the Doorways to Dreams (D2D) Fund, a non-profit that supports savings innovations for low-income consumers. In 2009, D2D helped the Michigan Credit Union League launch Save to Win. A year later, 87-year-old Billie June Smith won the first $100,000 grand prize thanks to a $75 deposit.

In order for its credit unions to offer customers such as Smith a Save to Win account, Michigan first had to create a legislative loophole. Without one, the product would have been an illegal lottery. Nebraska and North Carolina followed suit, and this spring Washington became the fourth and latest state to join the Save to Win program after passing its own amendment. Initial results are promising. In April, the D2D Fund reported that the number of credit unions offering Save to Win had increased from eight to 62, serving over 40,000 account holders – mostly with low or moderate incomes – who had saved more than $70 million from 2009 to 2012.

With regards to the U.K., Tufano points to Premium Bonds offered by National Savings and Investments (NS&I), the British government’s savings arm. In 2006, NS&I celebrated 50 years of offering the bonds, which at the time were held by over a third of the population. The first national prize-linked savings program in the U.K. – the Million Adventure – was launched more than 250 years before Premium Bonds as a strategy for coping with debt from the Nine Years’ War.

South Africa is another prize-linked savings success story, albeit one that only lasted three years. Starting in January 2005, the private First National Bank of South Africa (FNB) began offering what was called the Million a Month Account (MaMA). The account included a chance at winning monthly lotteries of up to one million rand, or around $100,000 at today’s rate. Nearly three quarters of South Africans were unbanked at the program’s outset. In mid-March 2008, FNB had opened over a million MaMAs and executives estimated the program stood for just over 7 per cent of all banked South Africans. By the end of that March, however, MaMA was no more. The South African lottery board sued to have the program closed as an illegal lottery, and won.

Unlike the active opposition faced in South Africa, the main obstacle for prize-linked savings in the U.S. has been regulation, or as Tufano puts it, “a history of inertia.” Decades-old legislation intended to protect state lottery franchises and to inhibit banks from taking part in gambling stand in the way. As Tufano has pointed out, these laws were never intended to stop banks and credit unions from offering products such as Save to Win accounts.

The Canadian legal waters for prize-linked savings are largely uncharted. As Toronto-based gaming lawyer Michael Lipton explains, a lottery has three defining legal features: prize, risk and consideration. To not be seen as a lottery in the eyes of the law, at least one of these must be eliminated. In terms of prize-linked savings, this would be consideration, according to Lipton. “If you’re losing nothing by participating in the activity, then that would go a long way to establish there is no consideration,” he says. However, court decisions from opposite ends of Canada suggest a legal battle over prize-linked savings could go either way.

Whereas the legality of prize-linked savings in North America is somewhat untested, the concept’s incentive power has recently reached new empirical heights. Results from the first two lab studies of prize-linked savings accounts were both published in the last year. The independent Institute for the Study of Labor (IZA) in Germany published the first in October 2012, and found the availability of a prize-linked savings account led to a significant savings increase across demographics. The average increase was 12 per cent, with demand coming mainly from reductions in lottery play and general consumption, but also some from traditional saving. The highest rate of increased saving occurred in the low-income bracket. Results from the second lab study, published in the U.S. in June by the National Bureau of Economic Research, were similarly positive.

The high appeal of prize-linked savings to low-income consumers demonstrated by research, as well as Save to Win and other applications of the concept, is an important point. These are the people who stand to benefit the most, dollar for dollar, from saving more and wasting less. Unfortunately, they are also those with the lowest levels of financial literacy and political influence. In other words, they are in no position to demand, say, that the Save to Win program be expanded in the U.S. or an equivalent product be offered in Canada. Rather, this group makes up a disproportionate number of participants in large lotteries, which are informally known as a tax on the poor.

“Savings by low-income families is inherently difficult, receives relatively little government incentives, and is – at best – tolerated by the financial sector,” wrote Tufano and Princeton University professor Daniel Schneider in 2007. They noted that economists often speak of “diminishing marginal returns” and that from the perspective of big banks the poor are beyond the profitable edge of these returns. However, from a wider, societal perspective, Tufano and Schneider wrote, “We may have the margin completely backwards.” Adding $100 or $1,000 in savings to a low-income family, they argued, “will surely have a bigger impact on their lives – and on society – than adding the same amount to a wealthy family’s balance sheet.”

Despite the challenges, prize-linked savings is making headway in the U.S. In June, Connecticut created a legal opening for credit unions to offer Save to Win accounts. Maryland, Rhode Island and Maine had already done the same. “You can’t lose,” Lee-Brewster tells her clients in Michigan. “It’s not as if you’re throwing money away. You will have the money at the end of the day.”

In short, for both consumers and policy makers, giving prize-linked savings a chance is not much of a gamble.