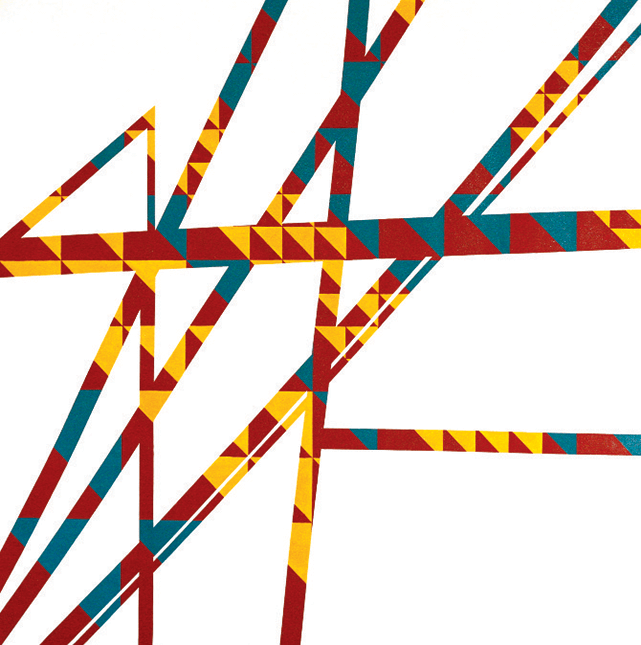 "Brigitte" 60" x 60" Acrylic on Canvas, from the series Modern Tipi, by Caroline Monnet

Since time immemorial, indigenous peoples around the world have used traditions of arts and ceremonies to transmit cultural values through generations. As the next in line to fill a 27th generation hereditary Chief seat for the Ahousaht First Nation of the Nuu-chah-nulth people, I am fortunate to have been raised by my family in indigenous traditions that respect the interconnectedness of the universe summarized by the worldview heshook-ish tsawalk – meaning “everything is one.”

This worldview, shared in principle by other indigenous communities, prescribes the necessity of a harmonious balance between community needs and the fragility of the natural environment, where the nature of existence is viewed as an integrated and orderly whole. Inherent in this worldview is that all humans share equally with other beings a responsibility to maintain positive and regenerative relationships with the natural environment.

Arguably, the majority of human societies will never return to the lifestyles enjoyed by pre-colonial indigenous communities, which must adapt to address the demands of a changing world where success is measured by economic growth, rather than collective well-being and the integrity of relationships.

Dominant contemporary societies have failed to find a balance between human well-being and the health of the natural environment. This failure can be seen not only in widespread poverty, but also in the state of our global climate, the devastation of forests, the volumes of pollutants in our oceans, lakes and rivers, and the extinction rates of flora and fauna species.

Many groups of indigenous peoples are included in the globe’s impoverished demographic. They face conditions of poverty that contribute to negative social, cultural and health related outcomes and are in stark contrast to the living conditions of many indigenous peoples during historical times of minimal colonial influence, which are often described by elders as times of well-being, when no one was hungry or cold, and there was minimal unhappiness.

Seeing poverty in indigenous communities, many people ask, “Why are some indigenous groups opposed to developments?” Or, “Why don’t indigenous people leave their homelands to find work?”

One answer is that many indigenous people are intrinsically connected to a specific land base through their culture. It is their home and their preferred way of life. The lands and waters are foundations of their cultural framework. The opportunity to define new models of economic development that are culturally appropriate is a human right at the very least. It is a concept recognized extensively in the United Nations Declaration on the Rights of Indigenous People. Facing conditions of poverty and cultural anxieties induced by colonial policies, indigenous communities are often left trying to close the gaps of economic disparities with little choice but to compromise cultural appropriation for the sake of economic opportunity.

In my experience, indigenous leaders and community members face two very common scenarios: One, they can choose to defend the natural environment from exploitative activity, and risk receiving no benefit from these activities that may move forward regardless of any opposition. Or two, they may choose to participate as minority, or at best, however rarely, equal partners in developments, perhaps neglecting their indigenous cultural values in the process. In either scenario, a common outcome is negative divisions between those who are pro-development and those who are opposed.

Despite these challenges, I also believe there are alternative models of development that are more culturally inclusive, but require collective compromise and effort to be successful. Lessons in indigenous cultures, translated by people like my grandfather, Umeek Richard Atleo in his publication The Principles of Tsawalk – An Indigenous Approach to Global Crisis, and the visions of social activists such as Paul Hawken, form the foundations of new approaches to development.

For the sake of our future, we must shed economic strategies that are linear and begin to replace them with models that are cyclical and regenerative. The foundations of these models have existed for thousands of years in the collective cultural values of indigenous people. We need to simply see these lessons as best practices and apply them as individuals in day-to-day life and our work. As an example, Hawken suggests that businesses should challenge themselves to redesign systems that reduce the output of waste and internalize the costs of environmental stewardship that are hidden and largely ignored in the free market.

I am by no means suggesting that all development is negative. What I am suggesting is that indigenous peoples have the right to make their own decisions for and about the management of their territorial resources. Also, that a collective effort must be made between indigenous communities, industry, other governments and non-government organizations to reconcile with mother earth and adopt traditional indigenous cultural values in the design and implementation of developments.

We must collectively find a renewed respect for the natural environment, for all of our relationships, and remember the lessons of our ancestors to guide us.